Van Morrison and ‘the power of naming’: how he influenced Belfast writers 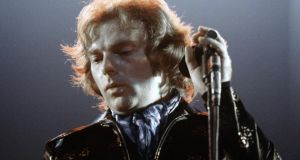 As is well known, Van Morrison’s early days in Belfast of the late 1950s and 1960s were often spent listening to jazz, folk and rhythm and blues. His east Belfast near contemporary, Stewart Parker, recalls in Dramatis Personae & other writings how he “started a skiffle group called The Troubadours which performed at one or two church hall dances. Inevitably my long-suffering father got implicated. I pestered him for a guitar until he finally built one for me. It was a vehicle of long hours of adolescent world weariness up in my cold bedroom.”

And surely this typical experience of his generation, 15 or so years later, would lead to Parker writing (between 1970 and 1976) the pioneering High Pop column for The Irish Times – an extraordinarily witty, lithe, urbane, knowledgeable, well-researched, energetic and critically ahead-of-its-time reading of popular music, not just of the 1970s, but throughout the 20th century.

As Lynne Parker remarked in her introduction to Parker’s Plays I, Stewart Parker “had a poetic sensibility, an academic training and a historian’s mind”, all effortlessly revealed in High Pop through the mix of ironic and comic anecdote with sharp-eyed cultural commentary.

In his astute commentary on the fundamentalism of American country music, Parker reflects on the transmission of the American west coast of The Beach Boys to the windy strands of Portrush, and on his sense of “political” songs and the “capacity of our available art forms to cope with contemporary political realities”. Music and music-making, fun and laughter were part and parcel of Stewart Parker’s artistic make-up, as much as they were features of his temperament.

Leontia Flynn’s poetry equally lives out in the world of strange, exhilarating encounters and though music and song don’t function in her writing in any conscious or allusive way, its presence is more like mood music. Her poems to both her mother and her ever whistling and singing father, source of the wonderful poem By My Skin, in Flynn’s first collection, These Days, are blissful, poignant and wise.

As the poem drifts into a rapturous hymn to the father’s repertoire the young girl is wrapped “in swaddling clothes” of love and attention to her skin condition; the poem becomes a song in its own right. Erratic student flats with some dodgy detritus, techie treats and teases, merge with the mixed joys of background music – The Bangles, Neil Young, Karen Carpenter, Patsy Cline and Foster and Allen (no less!) – providing a poetic video of what’s going on in the many cities Flynn’s poems visit.

Yet her poems magnetically return to a Belfast both actual and imagined, troubled and post-Troubles. It shouldn’t really come as a surprise that in her second volume, Drives, amid all the big names of European and American artists and thinkers, who should pop up in the “car stereo system” but Van Morrison. This is Cyprus Avenue:

Van Morrison is singing ‘Cyprus Avenue’
on the car stereo system
when we turn into Mourneview
car park. The ignition

sparked, we grind the gears
of your dad’s hatchback
with the sheathed interiors
and practise at the clutch.

An old song plays on the radio
I am captured in a car seat.
On the points of summer and youth
the whole world pivots.

Cyprus Avenue provides the title for David Ireland’s extraordinary play and it also features as a title in Lucy Caldwell’s moving collection of stories, Multitudes. For these stories, set in the main in east Belfast, move through a backdrop which has distinctive Morrison-like moods and reveries.

Just listen to this evocation of what the narrator calls “Van Morrison territory” in the opening to Caldwell’s love story Here We Are: “After we leave Cutters Wharf that night, we talk. We walk along the Lagan and through the Holylands: Palestine Street, Jerusalem Street, Damascus Street, Cairo Street. We cross the river and walk the whole sweep of the Ormeau Embankment. The tide is turning, and a two-person canoe is skimming downriver, slate grey and quicksilver. When we reach the point where the road curves away from the river, the pale evening light still lingers, so we keep walking.”

The hypnotic quality of walking and uncovering a deeper layer of emotional reality, something “un-seeable” but tangible all the same, is a current that flows through so much of northern Irish writing, particularly that based in or around Belfast, as if in defiance of the scarred and disfiguring history of the place the place itself produces a magic of its own: “…across the Ravenhill Road, down Toronto Street and London Street and the London Road, Rosebery Road and Willowfield Drive and across the Woodstock Road and on, further and further east until we are in Van Morrison territory: Hyndford Street and Abetta Parade, Grand Parade, the North Road, Orangefield.”

And in the closing refrain of the penultimate story Cyprus Avenue the returning young woman who has meet up in the airport with a fellow Belfast-bound traveller, Nirupam Choudbury, once “a young boy from Delhi growing up in Belfast who rides his bike along Cyprus Avenue”.

This is how Cyprus Avenue moves to its revelation: “You’ll walk down Cyprus Avenue and all the streets you used to play on, Sandford Avenue and Sunbury Avenue and Evelyn Avenue and Kirkliston Drive, and maybe you’ll walk on, walk the length of the Upper Newtownards Road, and the Albertbridge Road, and pause on the Albert Bridge itself, unlovely as it is, the traffic, the down-at-the-heel leisure centre, the railway station, to watch the starlings that mass and swoop above the east of the city in the evenings.”

“I’m likely remembering not one particular journey. On summer weekends, or special occasions, or most excitingly of all, if my Dad was test-driving a new car, we would drive out of Belfast along the coastal roads of the Ards Peninsula; and in the car Van Morrison would be playing. Sometimes the Chieftains, or Leonard Cohen, but I remember most of all the music of Van Morrison, a double cassette-tape of Hymns to the Silence, as my sisters and I day-dreamed and drowsed against each other in the back seat, cosy and warm and lulled by the car and the music. In the strange way that memory works, this has come to be talismanic to me: deeper and truer and somehow more meaningful than anything that might have actually happened. A transfiguration of the mundane, a momentary glimpse into something beyond; a sense of something I can’t quite articulate but have come back to time and again in my fiction.”

Caldwell goes on to specify the landscape which Morrison’s music, lyrics and performance endows with an almost-spiritual value: “And then one day, for no reason at all, your Mum takes a detour back from the Ormeau Embankment down Hyndford Street, through Orangefield, along Cyprus Avenue, and tells you that these are the places in the songs. I remember suddenly paying attention. I remember asking to go back to those streets, those places, and looking at the street-signs. These places weren’t just places any more: they were something more-than, something sacred… and writing the people and the places opened a trapdoor to more memories, specific memories of particular places at particular times, which I hadn’t realised I’d lost, or meant so much to me. Van Morrison understands this, and it is in his music that I first had intimations of it: the power of naming, the power of litany.”

Van Morrison’s literary influence as he celebrates his 75th birthday is now surfacing in Northern Ireland and finding its level amongst some of the finest writers of a younger generation including Lucy Caldwell, Wendy Erskine and David Ireland, all three of whom have family and cultural roots in east Belfast, which Morrison transformed into a lyrical landscape all of his own while producing as well an alternative vision of the city and a very different “alternative” history.

For there was another “parallel” or pre-world, one which my Looking Through You: Northern Chronicles tries to recover from the 1960s and a little beyond when Belfast, and the wider northern province, had a momentary opportunity to redress some of the civic, economic and cultural injustices which would eventually fester and provide the ammunition for what would follow. As we all know on this entire island we cannot let another such chance slip by, bearing in mind the economic and social challenges which lie ahead in the immediate future from the pandemic and Brexit.

Gerald Dawe’s most recent poetry collection is The Last Peacock. Looking Through You: Northern Chronicles is published in hardback by Merrion Press along with a paperback edition of In Another World: Van Morrison & Belfast.