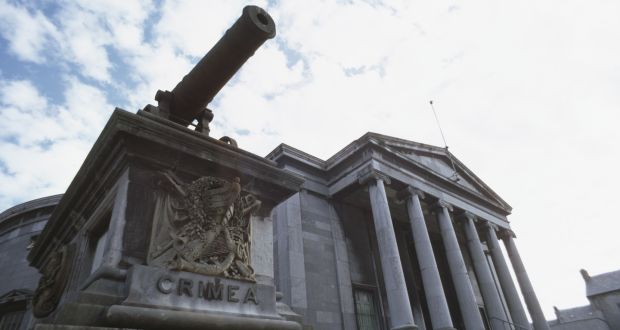 Tralee courthouse, Co Kerry, Ireland, was designed by Sir Richard Morrison and built in 1835. It has a monument of two cannons commemorating the Kerrymen who died in the Crimean War and the Indian Rebellion. Photograph: RDImages/Epics/Getty Images

In 1810, when James Black painted the City of Armagh, most of that town seemed to tumble in a venerable jumble from the cathedral to the foot of the hill. There, and set slightly apart, Black presented an urban innovation. What had once been a commons had of late been transformed into the Mall, an almost oval green, bordered by tree-lined paths, and punctuated at either end by a large public building. Potent and twinned, these buildings were symbols of Armagh’s status and its modernity.

Away to the north, facing the painter and proudly showing its neo-classical façade – portico, pediment and all – was the county courthouse. The Grand Jury, the landed men who constituted both local government and local justice, had commissioned the courthouse to host the county assize, and they saw it built between 1807 and 1810. Under Black’s gaze, the courthouse gleamed in its newness and in the light, suggesting benign order.

But from his chosen vantage, Black could not avoid seeing the rear of the county gaol. Also commissioned by the Grand Jury, the gaol was completed in 1780, to a design by Thomas Cooley, recently architect of Newgate gaol in Dublin. Its ominous walls and small windows promised dark yards and darker cells. These yards and cells had once been novel, but by 1810 penal reformers already regarded Cooley’s work as long out-of-date. Consequently, in the 55 years after Black’s visit, it would be the subject of condemnations and schemes, re-orderings and extensions, large and small.

In his fascinating new book Richard Butler tells the origins story of the county courthouses and the prisons built in Ireland between 1750 and 1850. This was the period in which these institutions, at least in their modern forms, were born. In important ways, those erected at Armagh were typical. Not least because, as Butler puts it, “gaols became immensely complicated palimpsests of penal reform architecture from different generations and movements. Whereas most courthouses had a single definite period of construction.”

Anyone who has visited Kilmainham will recognise this pattern. There, the Dublin county courthouse, built between 1819 and 1820, stands barely altered. Next door, in contrast, the gaol is a record in stone of changing penal fashions. Its west wing, opened in 1796, reflects the ideas of John Howard, the most influential of the first generation of modern penal reformers in Britain and Ireland, though it was largely re-built after a fire in 1817. The very different east wing was built over several years, beginning in 1857. With a bright hall and terraced cells, it was designed to facilitate the “separate system”, a petrifyingly rigorous prison regime that had been imported from Pennsylvania (via Britain), beginning in the late 1830s.

Kilmainham is well known. Butler’s gift to us is that he introduces a multitude of Ireland’s county courthouses and prisons. In a feat of historical and architectural detective work, he explains how and why these were erected, who commissioned and paid for them, how theories and designs evolved, and how plans and sites were chosen. Along the way, he introduces us to a cast of surveyors and architects, lobbyists and inspectors, politicians and judges.

Butler deals with the courthouse and prison in turn: first, the courthouse (in three chapters), then the prison (in four), with each chapter charting a phase of development. The analysis is greatly enhanced by the book’s production values. It is lavishly illustrated with photographs, maps, plans, architectural drawings, paintings, tables and charts. These are not deployed simply to attract readers with coffee tables to spare, rather the illustrations have been chosen and organized to make his arguments visible and so more accessible. For those interested in particular buildings, rather than general trends, the core text is followed by 150 pages of “Buildings’ Histories”.

Till the mid-18th century assize courts – the county court sittings held twice a year as part of “the circuit” – were held in multi-purpose buildings, such as tholsels or town halls. Beginning with the courthouse erected by Donegal’s Grand Jury at Lifford (1746-54), Butler traces the growing trend toward purpose-built county courthouses.

Though it was not the first, Butler identifies James Gandon’s courthouse in Waterford (1784-6) as particularly influential. With a vestibule, leading into parallel courtrooms (crown and civil), Gandon’s neo-classical building set a trend. Neo-classical became the courthouse style, though later examples such as Derry (1813-7) and Dundalk (1813-21) incorporated more rooms and offices, for judges, barristers, juries and officers of local government.

The peak of county courthouse construction occurred between 1798 and 1832, when Grand Juries across Ireland saw 28 to a conclusion. Trends in crime, it seems, had little to do with patterns of construction then, or at any time during the period considered by Butler. Instead, developments were driven by the availability of finance, fashion, and competition between counties.

Other root causes suggested by Butler include contests within counties regarding the site of the assize town (Tullamore versus Philipstown), the dividing of a county into ridings (Tipperary), sharp criticisms of existing facilities by judges (Carlow and Ennis), and the re-assertion of authority after rebellion (Wexford). It would have been interesting to read more about the relationship of these buildings to the increasing professionalization and courtroom role of lawyers, and to the greater prominence of the state’s criminal justice functions, whether policing or crown prosecutions.

When he turns to examining prisons, Butler makes important contributions to our understanding of Ireland’s penal history. The historian Michael Meranze has written caustically of the “recurring insistence that the answer to prison’s failure was more prisons”, and Butler charts for Ireland, in a way that has not previously been attempted, the practical manifestations in bricks and mortar, of rapidly evolving penal theories.

He reveals the pace at which radial and polygonal prisons, designed to improve health and facilitate the classification and inspection of prisoners, were adopted during the 1810s and 1820s. He demonstrates the combined importance, during the 1820s, of an augmented national inspection regime and the campaigning of the Association for the Improvement of Prisons and Penal Discipline in Ireland. And, he elucidates the gradual adoption as a new orthodoxy of the “separate system”.

If there is much theory and architecture but very few prisoners, then this is because they are not Butler’s focus. Their experiences are an important subject for another scholar: Butler has carried his off with aplomb.