‘The Hitchhiker’s Guide to the Galaxy’: 40 years on 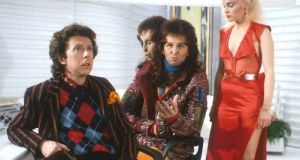 “The Hitchhiker’s Guide to the Galaxy”: Adams took 1970s and 1980s preoccupations and turned them into a layered, profound, imaginative and hilarious story that transcended the era.

The Hitchhiker’s Guide to the Galaxy is 40 years old. How do we know its popularity could yet outlast the dessert course at the Restaurant at the End of the Universe? Because of what happens when you give a copy to a young reader.

Pushing Douglas Adams’s book into their hand, you tell them it’s about a man called Arthur Dent and his alien friend Ford Prefect wandering the galaxy after the Earth is blown up to make way for a hyperspace bypass.

You do that because it’s more enticing than the alternative explanation:

“Here you go, kid. You’ll enjoy this metaphor for middle-class impotence in the face of unforgiving 1970s bureaucracy. It’s a mix of Monty Python and Isaac Asimov and has great jokes about digital watches and telephone sanitisers. No, even I don’t remember what telephone sanitisers were. Just read the book.”

So they do. Inevitably – and to the great relief of the parent who handed it to them despite fearing rejection of a story they have loved from adolescence to middle age – the young reader ends up wholly enthusiastic.

It helps that, while bracketed as science fiction, the story made no attempts at being speculative. This wasn’t Arthur C Clarke, trying to understand how the future might work. Instead, Adams created his universe along one Pythonesque rule: “Something that starts out as a silly idea has to have consequences in the real world.”

That made The Hitchhiker’s Guide to the Galaxy timeless, while making its sci-fi absurd enough to bound free of any genre preconceptions.

Still, before he died suddenly in 2001, Adams explained how he simply used science fiction as a way of exploring the ideas of “here and now”. As it turned out, he extended far beyond that, taking on the ideas of then, now and as far forward as we can imagine life surviving.

He did this not only literally in the story’s plot, but by taking 1970s and 1980s preoccupations – being an unimportant dot in a petty system; the constant disappointment of “progress” – and turning them into a layered, profound, imaginative and hilarious story that transcended the era. Regardless of how many digital watch jokes snuck in.

It’s all summed up in its most famous joke: the randomness of the answer to the Ultimate Question of Life, the Universe and Everything. You don’t need to know the books to know that the answer turns out to be 42, and that it is as good an answer as any ever proposed.

The Hitchhiker’s Guide was not an instant success, and arrived – as did so much of the series – from a crisis in Adams’s life. He had reached a sticky point in his writing career, was broke and was planning to leave it all behind.

Adams had reached a sticky point in his writing career, was broke and was planning to leave it all behind

A BBC producer, Simon Brett, encouraged his idea for a humorous science fiction series and Adams reached back to an idea that had first occurred to him in 1971 when he lay drunk in an Austrian field clutching a copy of The Hitchhiker’s Guide to Europe. Gazing up at the starlit sky. he considered how someone should write a Hitchhiker’s guide to the galaxy.

“I’ve now told the story so often,” he later said. “I can only remember the story and I can’t remember the event any more, so I have to take my own word for it that it’s true.”

After a slow enough start when it aired in 1978, the BBC Radio 4 series became a phenomenon. The books followed from 1979. Far more followed in between and after.

With each adaptation – radio to book to vinyl to stage to TV to video game and, after much frustration and several false starts, a posthumous movie – Adams was in a habit of rewriting, adding, subtracting, fixing. Arthur Dent’s famous dressing gown, for instance, first popped up in the 1981 TV series.

Some of the iterations are entangled. Some disregard others. Each stands alone as its own entity, some more successful than others. The stage musical was a failure; the video game a massive success. The TV series stands up surprisingly well, with its simple graphics a delight compared to the CGI expense of the disappointing movie.

As for the five books, the sad truth is that they declined in quality from the third onwards.

Much of Adams’s difficulties are laid out in Neil Gaiman’s superb Don’t Panic: Douglas Adams and The Hitchhiker’s Guide to the Galaxy, not least the author’s struggle to write to deadline. Or at all.

As early as the third book – Life, The Universe and Everything – cooling critical acclaim was met by Adams’s own unhappiness. He complained that his writing blocks always coincided with personal crises and repeatedly swore never to write another. Which he inevitably did.

The fifth book – Mostly Harmless (1992) – was downright morose, once again a reflection of being written against the backdrop of Adams’s “miserable” personal life.

Irish author Eoin Colfer’s official sequel And Another Thing… (2009) did an impressive job of relighting the spark of those earlier stories. Those first two books especially, plus the radio and TV series, still delight no matter how familiar they are.

Pick up The Hitchhiker’s Guide to the Galaxy, select any page, any paragraph, and you’ll find a famous moment of brilliance.

Page 51: the Babel fish that translates all languages and so has been responsible for more wars than any other creature in existence.

Page 58: the horror of Vogon poetry.

Always funny. Always genius. Regardless of what age you are, what decade you were born in, and whether you’ve any idea whatsoever what a telephone sanitiser was.

Shane Hegarty is author of the Darkmouth series (HarperCollins)