Making Oscar Wilde review: Michèle Mendelssohn’s fresh perspective will astonish even those who claim to know him intimately 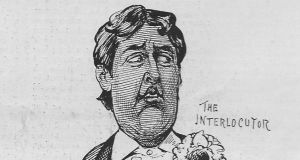 A short article titled “Public Amusements”, published in The Irish Times on Monday, November 6th, 1893, noted the performance in the Gaiety Theatre that night of Oscar Wilde’s new play, A Woman of No Importance. Observing that it “had the advantage of having been roundly attacked and as warmly defended”, the writer explained: “One critic holds it to be a ‘Christy Minstrel show’, another places it ‘on the highest level of the English-speaking drama’.”

The Christy Minstrels, a prominent blackface troupe formed in New York in 1843, was credited with popularising theatrical conventions that included the dandy and “the line”, a first act trio comprising “the interlocutor” who sits between Mr Tambo and Mr Bones.

In Making Oscar Wilde, Michèle Mendelssohn, a literary critic, cultural historian and associate professor of literature at the University of Oxford, provides a powerful and entertaining exploration of the links between minstrelsy and Wilde’s society comedies, which, as she points out, “remade the Victorian stage”.

Her curiosity about this aspect of Wilde’s work, and his hotly contested identity, is rooted in her encounters with Punch’s early depiction of him as “a thick-lipped, sunflower-faced Christy minstrel” and a parallel representation produced by the American lithography company Currier & Ives, which she describes as her obsession. Both astonishing images are included in the invaluable plates section alongside others that are rarely seen.

The greater part of Making Oscar Wilde is devoted to Wilde’s pivotal American tour of 1882, undertaken in the midst of an aesthetic craze during what Mendelssohn calls “the Age of Barnum, an era that rewarded the big, the bold, and the blustering”. Since leaving Oxford University, he had been drifting – “hustling” as Mendelssohn puts it – and turning himself in to “a B-list celebrity, merely human wallpaper”. It was in the United States, she contends, “that Wilde’s remarkable rise was set in motion”. Yet he seemed powerless at first. His managers manipulated his image while his troubling ethnicity and masculinity made him a figure of suspicion.

Wilde was billed as “Mr Oscar Wilde, the young English poet” and orchestras would strike up God Save the Queen on his arrival. In response, the Washington Post accused him of “ethnic trespass” and characterised him as “an evolutionary regression”, an expression of solidarity with Britain against the backdrop of the Irish Land War of 1879-82.

As Mendelssohn confirms, “deeply entrenched anti-Irish stereotypes and nativist rhetoric would perpetuate Irish exclusion from the higher echelons of American social and political life for decades to come”. In San Francisco, Wilde, who was pragmatically reticent about his nationality in London, called for home rule and declared himself “entirely at one with the position held by the Land League”. Yet he fell foul of Irish Americans too. The Irish Nation castigated him for lecturing on the English Renaissance while “hideous tyranny overshadows his native land”.

As Wilde’s tour progressed, professional imitators, many of them cross-dressing or cross-racial, exploited perceived sexual and ethnic ambiguities through troubling minstrel shows that pulled in audiences far larger than his erudite lectures on aestheticism.

At least one, The Utterly Too Toos, or Parodies on Oscar Wilde, had an all-black cast. According to Mendelssohn, “Wilde’s affiliation with blackness would become stronger as his tour progressed.” At that time, the emancipated slave community and the immigrant Irish community were reduced to a collection of crude, cruel stereotypes by their Anglo-Saxon oppressors. African-Americans were commonly referred to as “smoked Irish”. Enmity between these marginalised groups, which originated in competition for labouring jobs, “soon contaminated other aspects of life, especially in popular culture such as minstrelsy”.

Wilde too was reduced to a collection of symbols – sunflowers, knee breeches and silk stockings – and characterised as “Mr Wilde of Borneo”. He fought back by asserting his status as a “warrior artist”, a “legitimate cultural leader” of a new movement.

It is disappointing that he also appears to have invoked his whiteness. He objectified his black valet, referring to him in one letter home as “my slave”. While lecturing in the southern states, he claimed his connection to a hero of the Confederacy, his slave-owning maternal uncle John Kingston Elgee. The New Orleans-based Daily Picayune newspaper quoted him as declaring: “The case of the south in the civil war was to my mind much like that of Ireland today. It was a struggle for autonomy, self-government for a people”. He even visited Jefferson Davis, former president of the Confederate States, at his home in Biloxi, Mississippi.

Equally unsettling is what Mendelssohn describes as the Elgee family’s “fondness for white supremacy”. Wilde’s beloved mother hailed “the Teuton” and “the Celt” as the races set to dominate others that are “stationary or retrogressive”. It gets worse.

This is an extraordinary new take on Wilde. Even those who claim to know him intimately will be astonished and enthralled by Mendelssohn’s fresh perspective on his multifaceted life.