The comedian on a creative process that includes grandfathers, Red Hurley and turnips 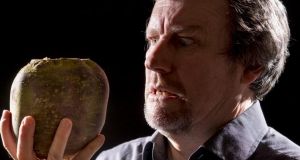 Karl MacDermott: Juggling with Turnips works in a uniquely holistic way as opposed to a mere humdrum literary way

Someone once said of my grandfather: “He’d say things he thought were funny but no one else did.”

That’s the story of my stand-up comedy career, I thought.

Someone else told me that when grandad wasn’t talking to his cat as he took her for a walk each evening, or when he wasn’t conversing with his vegetables in the patch at the bottom of his garden, he’d spend hours at a time just talking to himself.

I don’t own a cat and, aside from turnips, I don’t like vegetables. But, like grandad, I’ve spent an awful lot of time talking to myself. And in the process of talking to myself and then revving myself up into a yodelling frenzy, I attempt to write humour.

Now, finally, after a few decades, and too many embarrassingly loud one-way conversations, I have completed 23 stories of short comic fiction and put them all in a book called Juggling with Turnips. Which is, by my reckoning, about two-thirds of a short story per year. Some people might scoff at that work rate (enough of the beady eye, Mother, I thought we’d resolved all these issues years ago), but I always say it is not the quantity of the work that counts but the quality.

Even if the quality is, at times, variable.

Because, in a spirit of rare candour for an author, I will be the first to state that these pieces are not flawless. As a writer, I see, as my main strength, a rare ability to come up with names for characters and to invent quirky titles for stories. It is the in-between stuff I do sometimes fall down on, like . . . beginnings, endings, character development and plot, but I feel Juggling with Turnips works in a uniquely holistic way as opposed to a mere humdrum literary way.

Some of the stories examine my labyrinthine journey as a writer. In my early days, when I specialised in playwriting, I saw myself as Ireland’s answer to Tennessee Williams. Tennessee Williams once said that he would love to write a play and just put it in a drawer. So it can remain pure and untouched. And that’s exactly what happened to me. I wrote a play. Then posted it to a famous theatre. And someone just put it in a drawer. And there it remained. Pure and untouched.

The book also introduces, in a few of the other stories, my stand-up comedian alter ego, Quasimodo O’Shaughnessy. I have based these stories on my ill-fated career as a stand-up comedian, primarily around the time I decided to become Ireland’s only home-based anti-Irish comedian in the early 1990s.

Quasimodo has some very interesting tips for those planning a career in stand-up comedy. For example, how to react when you are heckled: “Firstly, it is important not to burst out crying. Just stay calm and hum serenely. Try to ignore if it persists. Under no circumstances respond, as that will only encourage them.”

Also incorporated are some poems from my critically ignored slim volume A Lot of White on the Page (Sludge Lagoon Press, 2011), including a 600-word dream-like meditative rumination on the permanency of singer Red Hurley in Irish life.

The book also contains some crime-themed stories. I, myself, would never commit a crime in this country because if I was found guilty and my barrister attempted to sway the judge with some character reference he wouldn’t be able to employ the most successful one used: “He is an integral part of, and does much voluntary work for, his local community.” Because, if truth be told, like most writers I’m not particularly “sociable”. I can honestly state that the only reason I ever go out is because I don’t want to be killed.

Do you ever notice all those TV news reports when someone gets murdered? And the reporter interviews a neighbour of the deceased and the neighbour always says “he was a quiet fella who kept to himself.”

You would presume, in all that time, just once, there’d be a gregarious murder victim out there. But no. It is always the quiet fella who kept to himself. Well, I’m a quiet fella (disregarding the ceaseless self-chat and intermittent yodelling) who keeps to himself, so each day I have to live with the startling fact that statistically there’s a huge chance, at any moment, I might get bumped off.

Juggling with Turnips is now available in all good bookshops and some forward-thinking vegetable shops that are looking into innovative ways of expanding their customer base. And about time too. Bookshops have been selling vegetable soup and quiche with leeks for years.

The life of a writer is an ongoing struggle. Sometimes, I wonder what’s the point of it all?

Since its launch last month, like all creative endeavours, the book has had some ups and downs. First, the good news. My agent has sold the worldwide rights for an undisclosed two-figure sum. Some people might scoff at that amount (my life choices were my own, Mother, let’s please, please, please drop the topic once and for all), but my agent says it’s not the amount per se that is important but a deal like this helps develop my brand.

Other things haven’t gone so well. I filmed a YouTube promotional video in the Phoenix Park of me attempting to juggle with some turnips which cost a fair bit of money. In addition to the hiring fee for Colman, my cameraman, I had to fork out extra cash for those painkillers after developing an acute case of RTI – repetitive turnip-related injury. The video was uploaded three weeks ago. As of today, I have minus 17 viewings. I don’t understand how that can be possible.

The life of a writer is an ongoing struggle. Sometimes, I wonder what’s the point of it all? How much more of this will I have to endure? Then I think of grandad again.

This acorn stuff can really do your head in.