‘Room Little Darker is not only about sex but love. But it’s no less dark for that’

Book Club: June Caldwell’s Dublin is a queasy city of deadbeats and upcyclers: everyone out to deceive in order to self-deceive, writes Joanna Walsh 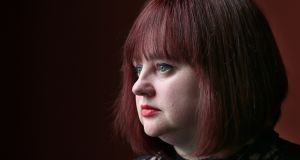 June Caldwell: a writer who knows the cells we live in and how we paper them, with wood chip that fancies itself Farrow & Ball

When June Caldwell sent me Room Little Darker she told me that Leitrim Flip might “give you a laugh”. It’s the story of a reluctant sub and a cocky Dom caught in their own trap in a Leitrim farmhouse kitchen. Some reviewers haven’t seen the funny side, one characterising the stories as presenting a paradigm of “woman as victim, man as pervert”.

Sure, the voices in Caldwell’s stories are transgressive. Sometimes they transgress humanity itself (as trees, as wolves). The borders between perceived right and wrong, human and non-human are slim: wanna be my dog? Sex is the hinge that connects all these states, but fuck-up is happening in the human brain. In Caldwell’s stories the mind, processing sex, produces romance: yes, Room Little Darker is not only about sex but love. But it’s no less dark for that, only a little darker.

Caldwell’s is a voice that’s been called “salty”, “rambunctious”, and it is all that, but what it does best is something surprisingly subtler. Caldwell’s voice listens to itself, waits for the right word and, when it arrives, swoops on it with merciless accuracy, using it to skewer meaning, an interesting situation for an author who writes – gloriously! – about language as a glorious failure to communicate emotions.

Take the narrator of BoyBot, resignedly venting his love and lust on a mechanical substitute, he “could see the boy was trying to make a concerted effort to connect with him more intimately using artificial intelligence algorithms”, or the protagonist of Dubstopia, articulate but not schoolbooked, who “wanted to bang [the nurse] for saying things he didn’t understand – subcutaneous”.

These words are needed to get around the strangeness of love which, always present in Caldwell’s stories, is often neither beneficent nor welcome, but something visited by one human on another, and god help the consequences. Her characters can’t divest themselves of love, which is the motor of her stories: helpless love, despite its circumstances. Each of the stories in Room Little Darker is a love letter, often a one-sided correspondence with an unwilling or unaware recipient. Desire, as the narrator of The Glens of Antrim says, is something that must be learned. And desire at a distance must be written.

Emails in particular are unreliable: see the Dom conjuring a sub in The Glens of Antrim, or BoyBot’s narrator’s correspondence with his ex partner-in-sex-crime (“I also need you to understand that this isn’t a threatening correspondence in any way. I wish you absolutely no lingering harm.”) It is the word of the law that keeps a woman alive for the use of her womb in Somat: Caldwell knows words are powerful. More than half of the violence in her stories is done in them.

Words are tricksy because people are tricksy, so tricksy that they seldom know themselves what they’re saying. “Even in retelling the story, I find I’m just as upset and confused as when I lived through it. I cannot be absolutely sure of what occurred,” says the narrator of Upcycle: an account of some strange happenings on Botanic Road.

Caldwell’s Dublin is a queasy city of deadbeats and upcyclers: everyone on the make, out to deceive in order to self-deceive with a slap-up coat of Annie Sloan paint, or at least the mention of it. Words are perhaps the padding to a cell. This is a writer who knows the cells we live in and how we paper them, with wood chip that fancies itself Farrow & Ball. Her women use words to make room in the crawlspace left them by sadistic lovers, controlling fathers. And what rooms Caldwell can build with them! Concerned with the domestic not only as inhabitant, but architect, she curlicues in baroque fashion, but her houses are skew-whiff, abandoned but still inhabited, not only damp-patched buildings, but wombs and arseholes. Words are desperate remedy for her wilful prisoners of language, willing themselves to make the best of it, and what they make is the heart-breaking very best.

It is with words that Botanic Road’s narrator confronts her ghosts, literal and metaphorical. And there are so many ghosts: dead babies, dead Das in mirrors, dead girlfriends, braindead mothers on life-support, all of them alive and not alive, like BoyBots, sentient trees, and people who think themselves half-beast, all hovering between two states, just as human as not.

It’s uncomfortable to think about finding some comfort in a cage, but sometimes a sex cage in a Leitrim kitchen isn’t so different from the cage of the everyday

Everyone in these stories is vulnerable – to change, disease, injury. There are a lot of bodies being hurt here, loving it even as they’re hating it, asking for it: junkies, submissives, destitutes and prostitutes. Marginal, abysmal bodies, precarious bodies, bodies ripped and frayed, bodies diseased or half-destroyed, helpless bodies with wildly articulate heads on them.

“There’s no shame here,” says a BoyBot technician, of a mechanised sexual encounter, coldly observed in the engineering lab. But there is. However they try to metamorphose, the humans in Room Little Darker can’t rid themselves of their humanity, and the shame that comes with it. This is what’s shocking.

“I don’t want to shock people,” Caldwell remarked in an interview, “I just want to write how things are.” While her world can be an uncomfortable place to dwell as a reader, we must also acknowledge that the world is an uncomfortable place. It’s uncomfortable to think about finding some comfort in a cage, but sometimes a sex cage in a Leitrim kitchen isn’t so different from the cage of the everyday.

In a world in which it’s normal for women to be grabbed by the pussy, and men to boast about it, the insistence that these are “shocking” subjects for a female writer is not only unrealistic: it’s an instrument of oppression. “Banter” is a freedom afforded to predominantly one gender, and a great deal of freedom begins with the freedom to describe, to discuss, and to put words to, what can be experienced, observed; and the freedom to tell stories about it. The power of this kind of “free speech” cannot be underestimated.
Joanna Walsh is the author of Break.up, published next month by Serpent’s Tail. He other works include Fractals, Hotel, Vertigo (previously an Irish Times Book Club selection) and World from the Word’s End. Room Little Darker by June Caldwell is March 2018’s Irish Times Book Club choice. Next: Michael Harding