In praise of older books: The Summer Before the Dark by Doris Lessing (1973)

Week 9: Julie Parsons on one of Doris Lessing’s quieter novels 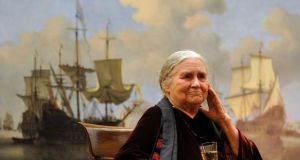 The Nobel Prize-winning novelist Doris Lessing, one of the most important English-language writers of the late 20th century. Photograph: Reuters/Toby Melville/Files

Her hair is the give-away. As middle aged, middle class Kate Brown descends further into confusion and despair, her smooth glossy helmet of dark red becomes grey, frizzy, ugly. Her husband, Michael, is spending the summer on sabbatical in America. Her grown-up children have all gone away too. Michael has persuaded her to take on a job as a translator for a conference run by a friend. He has insisted that their suburban family home be rented out. But when the job ends Kate finds herself alone and adrift in London. Her carefully constructed identity as wife and mother begins to disintegrate. A new Kate emerges. And the greyness of her hair is the sign of her metamorphosis.

The Summer Before The Dark is one of Doris Lessing’s quieter novels. It doesn’t trumpet her critical preoccupations – feminism, communism, racism, but it is still suffused with her beliefs. For Lessing the personal is always political. I read it first in the early 1970s, and Kate’s painful questioning of her life has stayed with me ever since.

Alone for the first time since she married, Kate is acutely aware that her age has made her invisible. They didn’t call it ageism then. But as she says “she knew now that all her life she had been held upright by the notice of other people”. As she walks the city streets she realises that men don’t see her. She is no longer desired. Her beauty, which she took for granted, has gone. What is left? Nothing remains but the dishonesties of her marriage. She had always known that Michael was having discreet affairs with younger women who he said “would not be hurt by them”.

As summer gives way to autumn and her family return home, Kate makes the decision to return too. Her hair remains defiantly grey. A new woman will take her place in their old life.