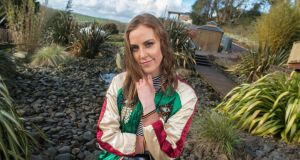 How unlikable a protagonist can the reader stand? This seems to be the challenge Louise O’Neill has set herself with Almost Love. The novel tells the story Sarah Fitzpatrick, a young woman who moved to Dublin to go to art college and now – her late 20s rapidly bearing down on her – finds herself teaching at a prestigious school, yet unable to pursue her own art or figure out why she’s not happy with her boyfriend Oisín, whose famous artist mother allows them to live in her house rent-free (twice-weekly cleaner included).

“Finds herself” is a cliché, but in Sarah’s case it is apt. O’Neill divides the chapters between “Now”, told in the second person, and “Then”, told in the first, and it is only via the latter that we begin to understand how Sarah has become, despite her apparent good fortune, so unhappy. We learn that her mother died when she was young, and that her father, unable to cope, neglected his grieving daughter. It is also through these “Then” sections that we gradually begin to understand the relationship on which the book’s blurb focuses: an affair (of sorts) with a successful man 20 years her senior, Matthew Brennan.

At first glance, it is a classic tale of young-pretty-thing-meets-manipulative-older-shit. But O’Neill, of course, would not allow anything so simple, and if there’s one thing you should know about Almost Love, it’s this: Sarah is awful. Really, really awful. She’s angry at the “backward” town that she’s from, angry at her friends for being happy, angry at herself for not painting, angry with anyone who tries to encourage her to, angry at her boyfriend for fancying her and angry when he starts to give up on their relationship.

Frustrated by her own failures, bereft from her childhood loss, and struggling to navigate the class anxieties of her new life in the city, Sarah is compulsively cruel to anyone who finds happiness. At her pregnant friend’s wedding, she “reassures” the bride that “white is a hard colour to pull off, at any weight”. (In her head, she reassures herself: “I was so much thinner than she was now.”)

Those who love her, meanwhile, are punished for it. She takes advantage of her friends and ignores her father. When Oisín asks that she not “just tell me to f**k off”, she replies with a jibe about his mother: “Oh, Jesus Christ. Have you been reading Oonagh’s self-help books again?” Her cruelty to him is compulsive. “Why,” he asks her repeatedly, “are you being so mean to me?”

At one point, she demeans their relationship by wondering if he, who seemed to fall in love with her so easily, might have fallen just as easily for anyone: “Any girl in Copper’s that night would have done.” Yet we have little idea why she fell in love with him, except that he brings out an uncomfortable vulnerability in her. In fact, we are told little about her hinterland; about what kind of art she wants to make; what she really values.

The result is a protagonist who gives the reader just as little chance to love her as she does anyone else. Even Matthew’s awful behaviour is almost eclipsed by how unsympathetic she is – even as O’Neill depicts with chilling precision his indifference to her sexual pleasure, refusal to treat her with dignity and, via a series of viscerally cringe-worthy text messages, his greedy comfort in her excessive neediness.

Had I not been reading this for review, I would have surely have skipped whole chunks of pages. With the relentlessness of Sarah’s bad behaviour and ugly thoughts, O’Neill has perfectly replicated the frustrating exhaustion of living in her protagonist’s head. Intellectually, I admire it. But it brought me little pleasure.

Yet if Almost Love offers scant joy it has ample genius. Writing in this newspaper about O’Neill’s (rightly) critically-lauded second novel, Asking For It, Marian Keyes said that the writer had “reshaped the template for the female protagonist”. She explains, “it would have been so easy to make [main character] Emma an angel, because then we’d have no doubt about who were the goodies and who were the baddies.”

Almost Love pushes this nuance further. For while the attack that Emma suffers in Asking For It is so horrific that one can only conclude, as Keyes says, “rape is always rape”, Matthew’s behaviour in Almost Love exists in a hazy grey area – one plenty of women will recognise. Sarah pursues him endlessly, going back to “their” hotel room again and again. On her one visit to his house, she finds he has a vulnerability of his own, something which she does not take kindly to.

A psychologist would surely have a field day with the fact that Sarah, who knows neither how to stand up for herself or allow herself to be cared for, is kind only to the person who considers her worthless.

When she finally realises this, at the end of the novel, it is a blessed relief. We find her, suddenly, likeable, as she allows herself to be kind in a way that assures her the darkest years have passed.

A beach read, it is not. But Almost Love breaks another boundary that women’s fiction rarely approaches: that toxic people deserve to have their stories told, too.