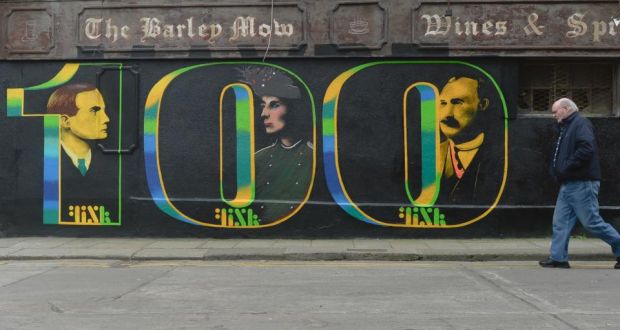 A century since the Rising: street art on Marks Alley West in Dublin. Photograph: Artur Widak/NurPhoto via Getty

Book Title:
Ireland 1916-2016: The Promise and Challenge of National Sovereignty

By November 2016 the Easter Rising of 1916 had been well and robustly commemorated. As a result a conference at NUI Galway that month, under the title Ireland 1916-2016: The Promise and Challenge of National Sovereignty, fell somewhat under the radar. This volume provides a record of some of the valuable proceedings of that conference, and although it is a stretch to claim it is a fully coherent collection with its various gazes focused firmly on the titular theme, it is nonetheless a mostly stimulating collection with great relevance to contemporary debate. Many conference volumes are dull, dense and destined for obscure shelves. This collection, however, is academically rigorous, accessible and frequently irreverent and lively.

This is down to the calibre of the six contributors, all of whom are of Irish birth or descent and experienced public intellectuals: the moral and political philosopher Philip Pettit, the historian Roy Foster, the literary critic and cultural historian Clair Wills, the economic historian Kevin O’Rourke, the political scientist and University of Oxford vice-chancellor Louise Richardson and the political scientist Brendan O’Leary.

Pettit places European republicanism in a broad historical context and traces the evolution of responses to the challenge of how to conceive of the relationship between government or law and the freedom of individuals, and he explores the liberal notion of freedom as noninterference. He delineates the difference between neoliberalism – “a society where peoples’ competition with one another is a free-for-all in which the winners take most of the spoils” – and the neorepublicanism he supports: “a society in which economic and related forms of competition are certainly allowed but only within limits that ensure against the dependency and humiliation of weaker members”.

Roy Foster observes that after the Irish revolution ‘the new state mimicked so many of the legal, political and cultural forces of the British government ethos’

Foster observes that after the Irish revolution “the new state mimicked so many of the legal, political and cultural forces of the British government ethos” – and that it is too easy to deride such conservatism, which engendered stability in a Europe where democracy was under siege. Nonetheless, it is important that the wish of the 1916 revolutionaries to make a different world be understood, as the restrictive state that emerged from the 1920s “denied many people the futures that they wanted and expected”.

Clair Wills suggests that the recent economic crash and the retreat of the Catholic Church have had a decisive impact on how we commemorate the revolution, partly because it is “no longer possible to separate the story of national sovereignty from the story of what was done with that sovereignty”. That fusion finds expression in writing that mixes fictionalised personal memoir and historical research as artists interrogate narratives of the nation.

Kevin O’Rourke delivers a robust challenge to traditional assumptions about our economic history and our supposed uniqueness: Ireland’s economic history in the 75 years after 1926 was “not all that unusual”, and we need to look for benchmarks other than the UK. The Irish economy behaved rather like those of other peripheral European economies, such as Finland or Greece, and it is clear that Ireland’s membership of the EEC boosted per-capita growth and that the economy would not have performed so well had Ireland remained a region of the UK. Globalisation held advantages for the Irish economy, but, looking forward, adjustments will be necessary, because “hyper globalization” is not sustainable.

Louise Richardson’s contribution, on the role of education in addressing the challenges of the 21st century, falls flat and does not cohere with the other essays; as she acknowledges herself, her title was “way too ambitious”. She offers a few half-baked perspectives on universities and Islamic radicalisation, and inequality in access to education; the impression is left of her falling between the two stools of her academic area of expertise – terrorism and counter terrorism – and her role as a senior university administrator.

Donald Trump, Brexit, international political volatility and economic models and markets all feature as part of the backdrop to these essays

In contrast, Brendan O’Leary indulges in a very impressive parlour game of predictions (“some other contributors to this conference had easy assignments about the past”). The result is insightful and especially relevant to recent events in Northern Ireland and London: “the misalliance between the Conservatives and the DUP seems likely to end in a farce, albeit an expensive one for the mass publics of these islands”. He suggests there will be much more discussion of future Irish unity as something that will benefit Ireland as a whole, predicts another Scottish independence referendum and a continuing Irish establishment’s attachment to the EU. It is also likely, he suggests, that before any vote on Irish unity, Irish people “may be asked to vote on some UK-EU 27 Agreement”. While “overt special status” for Northern Ireland in the context of Brexit might not be granted in name, “it may come in practice”. And it is needed.

As well as Irish sovereignty, and the legacy of the ideological visions of a century ago, Donald Trump, Brexit, international political volatility and economic models and markets all feature as part of the backdrop to these essays. The book is a short but powerful vindication of the relevance and vitality of the humanities in providing context and a framework for debate about urgent contemporary issues.

Diarmaid Ferriter is professor of modern Irish history at University College Dublin and an Irish Times columnist. His next book, On the Edge: Ireland’s Offshore Islands, A Modern History will be published in September by Profile Books