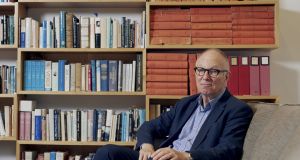 Ian Buruma: It is unclear whether he resigned or was fired from The New York Review of Books. Photograph: Vincent Tullo/The New York Times

Ian Buruma, the editor of The New York Review of Books, left his position on Wednesday amid an uproar over the magazine’s publication of an essay by a disgraced Canadian radio broadcaster who had been accused of sexually assaulting women.

“Ian Buruma is no longer the editor of The New York Review of Books,” Nicholas During, a publicist for the magazine, wrote in an email. It was unclear if Buruma resigned or was fired.

The essay’s author, Jian Ghomeshi, who was acquitted of sexual assault charges in 2016, lamented his status as a pariah, “constantly competing with a villainous version of myself online.”

It caused immediate furore, with some criticising what they saw as a self-pitying tone, and soft pedaling of the accusations, which included slapping and choking, and had come from more than 20 women, rather than “several,” as Ghomeshi wrote. Buruma drew further censure by giving an interview that many interpreted as showing lack of interest in the claims against Ghomeshi.

The upheaval at the publication shows the raw emotion still surrounding nearly every #MeToo accusation and response, less than year since the first reports about Harvey Weinstein’s behaviour unleashed a tide of allegations against other famous men.

Ghomeshi counts among several high-profile men, including the comedian Louis C.K. and the former public radio host John Hockenberry, who have recently resurfaced in the public eye following allegations of sexual misconduct or harassment. The re-entry attempts have met both approval and opprobrium – Louis C.K.’s surprise stand up set last month in New York was applauded by the crowd and decried by many others – underscoring how little consensus exists about what sort of redemption the #MeToo men deserve.

Hockenberry wrote a 7,000-word article titled “Exile” in Harper’s Magazine this month, rueing his continued banishment and shaming. “For almost a year I have lived as a pariah facing cold silence or open hostility in public,” he wrote. “I have watched presumed friends vanish. I have listened to colleagues, lawyers, and PR professionals tell me that I am unemployable.”

Ghomeshi’s essay, which was half as long, was published last Friday. Attempts to reach him for comment on Wednesday were unsuccessful. Buruma did not respond to a phone call and email seeking comment.

On Wednesday, the magazine posted a note atop the essay that began, “The following article, which has provoked much criticism, should have included acknowledgment of the serious nature and number of allegations that had been made against the writer, Jian Ghomeshi.” It then listed some of the allegations.

In the essay, Ghomeshi recounted his experience being fired from his job as the host of “Q,” a culture program for the Canadian Broadcasting Corp., in 2014 amid reports about his behaviour.

“Even as I feel deep remorse about how I treated some people in my life, I cannot confess to the accusations that are inaccurate,” he wrote. “What I do confess is that I was emotionally thoughtless in the way I treated those I dated and tried to date.”

“I was demanding on dates and in personal affairs. I would keep lobbying for what I wanted. I was critical and dismissive. Some women I cared about went along with things I wanted to avoid my disappointment or moods. I ought to have been more respectful and responsive with the women in my life. To them I say, you deserved much better from me.”

But the broader theme of the piece, titled “Reflections From a Hashtag,” was how Ghomeshi became a target of ostracism on social media and in Canadian newspapers, an experience that left him “suicidal.”

“There has indeed been enough humiliation for a lifetime,” he wrote. “I cannot just move to another town and reboot with a pseudonym. I’m constantly competing with a villainous version of myself online. This is the power of a contemporary mass shaming.”

Ghomeshi’s article, which has yet to reach print subscribers, appears in the magazine’s October 11th edition, which includes three essays on the cover as a package under the headline “The Fall of Men.”

Backlash against the piece began even before it was posted, as word of it leaked out. Then, in an interview with Isaac Chotiner of Slate, which was posted not long after the essay was, Buruma defended his decision to publish Ghomeshi’s piece, noting that while “not everyone agreed,” once the decision was made, the staff “stuck together.”

When pressed by Chotiner about the several accusations of sexual assault against Ghomeshi, Buruma said: “I’m no judge of the rights and wrongs of every allegation. How can I be?” He also noted that Ghomeshi had been acquitted and said there was no proof he committed a crime, adding, “The exact nature of his behaviour – how much consent was involved – I have no idea, nor is it really my concern.”

The Slate interview drew detractors from even within the Review’s own ranks. In a series of tweets, Amia Srinivasan, a contributor to the magazine and lecturer at University College London, slammed Buruma for saying Ghomeshi’s behaviour was not his concern, and his assertion that the Ghomeshi piece had the office’s support. “Top-down decision-making often feels this way to those in power,” she wrote. “Feel free to consider this a complaint.”

But the reaction was not uniform. Laura Kipnis, also a contributor, said that the Review had a history of publishing “tough, controversial pieces” that did not kowtow to public opinion, and she lamented that doing so cost Buruma his job.

Letting people in Ghomeshi’s position have a platform did not exonerate them, she said. “It’s hearing what somebody has to say in social position of suddenly being exiled from social life, and sentenced to a nonexistence,” she said.

The Review declined to elaborate on whether Buruma was asked to leave or did it voluntarily. But James Fenton, an English poet and literary critic, longtime contributor to the Review, and friend of Buruma’s, said he believed the editor was unhappy about leaving.