Gary Shteyngart’s is a dark, touching tale of a Manhattan hedge fund manager 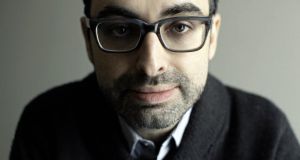 Gary Shteyngart: his novel looks at the comic failure of one individual and his bogus business dealings and what is happening to America.

Barry Cohen, a man with $2.4 billion of assets under management, staggers into the Port Authority Bus Terminal on a perfect Manhattan night, bleeding, and so the caper begins. We don’t know what has befallen him: marriage woes; financial fell strokes; an inability to accept his small son’s autism diagnosis; a generic mid-life showdown. What we are told is that he’s been attacked by the nanny. He has a proclivity for watches, some of which are valued at $70,000. He sups 48-year-old Karuizawa single cask whiskey at $33,000 a bottle. But at this very moment in time he’s scarpering with $600 in his pocket and no plan. He’s been obsessing about his ex from college, Layla, a woman ripe for love and heartache. What if he was to show up in El Paso where she lives now? Not on his NetJets account, but on a Greyhound bus?

Shteyngart conceived the novel after friends were priced out of the “artistic” parts of Manhattan by middling millionaires on the “sell” side of finance. He wanted to chart the lives of these 1-per centers: the earnestly progressive Democrats adored for their salubrious garb and limitless get-up-and-go. After befriending some real-life “hedgies” he realised there was serious emotional deficiencies, a pitiable lack of imagination, and a lot of unhappiness. The trading floor had become a human branding machine with automation solutions. “Before Princeton, Barry felt like he could understand more of what was being said out on the streets, but now he needed subtitles.” Like his protagonist, Shteyngart travelled around America by Greyhound in 2016, describing it as a “melancholy but very instructive experience”. He heard and felt and saw the strange shrapnel of the newly-elected Trumpian administration. Lake Success is a deliberate glower at real political psychosis, filtered through the comic failure of one individual and his bogus business dealings. What is happening to America and how is this being acted out?

Barry is a rat’s nest of a hedge fund manager – This Side of Capital being his fund. The US Securities and Exchange Commission (SEC) are on his tail. “What proof did the feds have that he’d used his relationship with Valupro to make money off the demise of GastroLux? It was like the whole of society was positioned to make sure Barry didn’t make money off anything. It was socialism. He didn’t want Trump to win, but he was glad the Obama years were sputtering to an end, even as they coincided with his own potential demise.” He identifies everyone he meets by colour or race. Everything and everyone are pigeon-holed and processed according to peak net worth. Even marital orgasms are treated as separate “work products”. Despite this Barry does exhibit signs of being self-aware. He knows that his fellow hedgies will get to hear of his meltdown and judge him harshly for it. “Like your first ankle monitor or your fourth divorce, the occasional break with reality was an important part of any hedge-fund titan’s biography.”

Seema, his “tall and compact” wife, is slightly more palatable, but not exactly affable either. He waited a long time for her, “the right young woman with young perfect eggs”. Their son Shiva’s diagnosis results in him being refused from seven stellar kindergartens including the Flatiron Montessori they planned to send him to. As the book goes on, the plight of this small boy becomes the central theme and focus. There are father-son scenes that are utterly heartbreaking. “I love you so much. Please talk,” Barry says. “I know it’s in you. I know it’s in you. I’m your father. Don’t you see that? Don’t you see that I’m your father? Daddy’s here . . . The child’s scream formed a funnel of its own, reaching upward into the ceilings and drilling straight into Rupert Murdoch’s triplex.”

When Seema thinks she might be pregnant again, Barry tells her he wants an abortion. “You know what the odds are of another boy with...” He couldn’t say it either, not even in the drunken heat of the night. “The diagnosis.” It is left to Seema to deal with, while Barry goes on the road with his band of denial. The cast of periphery players that drop in and out of Barry’s journey are hackneyed and hilarious. Male friends the Princeton bros come across as crass dullards, while the women, the sparkly wives, all seem to look and act the same; highlighted and nondescript, clinking Miller Lite. “Marrying an accomplished woman and taking her off the job market was a way to telegraph success among Barry’s peers.”

The mélange of voices talking over and at each other but forever failing to connect is what gives the story its sap. It is a very funny book and a strangely ugly book. The dialogue is convincing. The plot seems to present itself but disappear just as quick. Close attention to a lot of trivial detail and a big troupe of characters is exhausting at times, but I doubt anyone will want to abandon this book at any stage. Chapter after chapter there is a build-up to the worst kind of crash, consequence or redemption. For all the cringe-coldness of the protagonist and the unashamed shallowness of many others, Lake Success is a proper addictive read. We want to see Barry inter himself alive but get out in the nick via some small smack of humanity. There are great moments where he does battle to prove himself capable of great heart – when he attempts to start up an urban watch “fund” so that children who live in poverty can learn to worship stunning timepieces just as he does. There are even greater moments when he gives in to impulsivity with graphic consequences.

Alas, Barry’s foundations are not that good at all, which makes him vulnerable along the faultline. He is an only child with a mother who died in a car accident when he was five; a father who cleaned swimming pools of the wealthy and bought the family towels second-hand. What is he really doing in the fabulous scheme of things and does he deserve anything approaching pity? Is he capable of changing and doing something new, odd, exceptional, real? If only life was a watch face, gilded and well-engineered, ticking in a predictable manner, with no unscheduled stops or breaks. What would Hemingway do? The ending is superb and will leave you properly trumped.