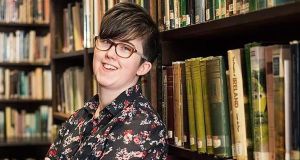 Lyra McKee: she was committed to recovering the lost stories of boys whose lives had not been deemed worthy of serious investigation. Photograph: AFP/Getty Images

In the last 10 days I have witnessed three standing ovations. The first was on April 15th at the Lyric Theatre in Belfast where two Man Booker Prize winners – Anne Enright and Anna Burns – shared the stage to celebrate a turning point in the cultural history of Northern Ireland: Milkman, a novel born out of the Troubles (both capitals are significant), winning the most prestigious literary prize awarded in the UK.

The win – and ensuing event, a kind of homecoming for Anna and her work – had tremendous significance for two reasons: the success of Milkman bears witness to a place and a time, a culture and a voice that doesn’t find itself in the mainstream media outside of these six counties, and in so doing it magnifies the stories of those who rarely find themselves heard. But the other reason for the celebration of Anna Burns’s novel was that it truly felt historic.

The conversation, and those privileged enough to bear witness to it, was about how we could talk about these traumas now they had passed. It was about how those times had been metabolised in this very special novel.

On the taxi back to our hotel I asked Anna why I hadn’t seen Lyra.

Lyra McKee was a passionate advocate of Anna’s work and its cultural and political significance, and the respect and deep affection were entirely reciprocal.

Anna and the beauty of her work presaged such hope for Lyra, and Lyra in return wowed with her energy and openness, her generosity and talent.

It turned out she had work on. We were sorry to miss her at this particular do, but it didn’t signify, I’d see her next time she was in London and Anna was having dinner with her in a few days anyway. Three days later Lyra was shot dead. In the street. On the eve of the anniversary of the Good Friday Agreement and the Easter Rising. Her murder was initially claimed as a legitimate act of war by a splinter terrorist organisation.

On April 24th I witnessed (and participated in) my second and third standing ovations. They happened at Lyra’s funeral. They were part of the applause that filled St Anne’s Cathedral as Lyra’s family and friends celebrated her life and stood testament to her work. But they were also an act in themselves – an act to disavow silence.

Silence. The natural consequence of death, silence has a very particular place in the history of Northern Ireland.

When Fr Magill quoted Lyra’s friend to say “we have had enough”, his was a direct plea to end the remorseless cycle of violence and political fracture that has plagued his country and its people, but he also called for an end to silence. For the Northern Irish community finally to be free to bear witness to what happened to Lyra, yes, but his was also a call to end the incursions – political and economic, sectarian and social – that force the most vulnerable, the weakest, the lost, to remain unheard, their demands for change unanswered.

Lyra McKee cared about breaking silences. As a writer she was committed to recovering the lost stories of boys whose lives had not been deemed worthy of serious investigation and in preparing to publish an account of their loss she was claiming their right to be heard, to be mourned, to be loved.