The Animal’s Companion review: an ambitious history of love and cruelty 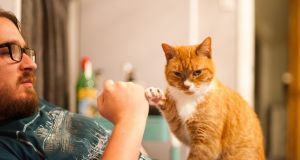 At one point, a cat could be considered as valuable as three cows.

Book Title:
The Animal’s Companion: People and their Pets, a 26,000-Year-Old History

The author starts this ambitious book with a redhaired man and his red setter wearing matching bandanas and sunglasses, who made her wonder why so many of us feel so impelled to allow unutterably alien animals live at our hearths, and lodge in our hearts.

Inevitably, we think about our own companion animals – for me, spaniels, like the one that tried to follow King Charles to the scaffold, and terriers, like the one that charges across this book’s cover. So ensues an engaging, insightful consideration of how anthropomorphism, cruelty, egocentrism, empathy, realism and sentimentality have blended and blurred across centuries – teaching us a vast amount about animals, and even more about ourselves.

One of our oldest ideals is being able to talk to animals, as we did in Eden, although few of these mythic conversations ended as badly as Eve’s. Some cults adored animals; even animal sacrifice is a kind of communion. Not all Christians admired all Creation, or were sure where boundaries lay; there were medieval trials of “evil” pigs, rats and weevils. A 15th century Dutch manuscript shows stains of feline urine, and the enraged monk’s caricature of the culprit and malediction against all cats. Puritans regarded animistic and Edenic ideals as near-Satanic, worried over-familiar pets might shade into witches’ familiars - although probably even the severest had four-legged “family”.

Pet, a term from the Scottish-English borders, was probably first applied to lambs, but can encompass any animal if its “owner” esteems it. Romans adopted locusts, hares, dolphins and moray eels. (The “crazy cat-lady” has been a moralising motif since the time of Augustus.) Excavations at Navan Fort unearthed an Iron Age Barbary Ape. An eighth century Irish legal code listed badgers, cranes, otters, ravens, rooks and squirrels as pets for whom owners were responsible. Castile’s King Alfonso X commissioned a song of thanks to the Virgin when his weasel escaped death. More recently, people have made pets of cockroaches, pixels, even rocks.

“Pet” connotes amusement, companionship, “cuteness”, dependency, and smallness (and being pampered, and spoiled). Even confined to the ovine, the term is complicated. “Baa-baa black sheep” is a cipher, whereas “Mary’s little lamb” is a pet - because of the love felt by the girl for that lamb which had singled her out to follow. Even so, Mary’s pet’s outlook is uncertain. The hard histories of up-countries teem with lambs taken down tenderly from wintry hillsides to be hand-fed – to be slaughtered later, when the snow-fleeced frisker has become a valuable commodity.

The person-pet dynamic has always been pragmatic as well as psychological. We cannot know what relationship existed between the boy and the proto-dog who 26,000 years ago dared the totemic Chauvet cave, but the boy was probably glad of the company in case of cave-bears, as the author was grateful for Fergus in spectre-stalked Suffolk. Celtic law books recommended small dogs guard mothers-to-be against fairies, and gave a cat the same value as three cows if proficient at mousing and purring, and one-and-a-half cows just for purring. 1413’s The Master of Game suggested Nosewise, Clench and Holdfast as hortatory hound-names, to bring luck to the huntsman, and the 1486 Boke of St Albans “small ladyes poppes” to “bere away the flees”.

We have forced horses onto chevaux de frise, consigned them to coal-pits, eaten them – and treated them better than we treat ourselves. The author uses a dragoon officer’s relationship with his charger as a parable of perennial love - the horse’s gravestone in a Surrey field almost the only trace of his rider’s aristocratic estate. Self-styled dog-lovers select breeds for appearance rather than health. White mice are toyed with, brown ones trapped. Technicians treat lab rats differently once they have been assigned names. Canaries were talked to – and jailed – and taken down mines to asphyxiate. “The cage is its native element”, thought a benevolent, blockheaded Boys’ Own editor.

Descartes notoriously viewed animals as automata, but his unfeeling “bête-machine” was disbelieved in even by his contemporaries, because closeness to animals is intrinsically enlightening. Unarticulated ideas can be communicated by unspeaking animals, their exciting arrivals and disconsolate departures teaching children about duty, love, sex and death - lessons they can and do project onto people. As a fledgling ideology of animal liberation starts a long flight towards legislation, the next target is pet ownership itself. But the truth is we will always need animals because, in the words of Walt Whitman, “They bring me tokens of myself”.