Elllis rails against ‘Generation Wuss’ in a book of essays. Recommended 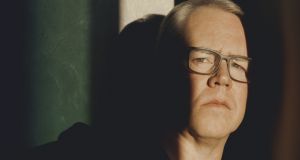 Bret Easton Ellis defines a midlife crisis as being ‘the moment in a man’s life when he realises he can’t – that he won’t – maintain the pose he’d thought was required of him for a single day longer’. Photograph: Ryan Pfluger/New York Times

Bret Easton Ellis begins by sharing “an oppression I felt whenever I ventured online, a sense that I was going to somehow make a mistake instead of simply offering an opinion or make a joke or criticise someone or something ... The fearful began to instantly see the entire humanity of an individual in a cheeky, offensive tweet and were outraged.”

Later there is a definition of a midlife crisis as being “the moment in a man’s life when he realises he can’t – that he won’t – maintain the pose he’d thought was required of him for a single day longer”.

Here are two key themes of this book of essays: firstly, a middle-aged white male criticising millennials (so it divides along generational lines); and secondly, the notion of people as actors who are not behaving with authenticity. Ellis weaves his themes throughout the essay to produce a cohesive whole.

That Ellis engages with his themes in a forthright, abrasive and unapologetic, intelligent manner is no surprise given he is the author of American Psycho, the great satire on capitalist America of the late 1980s where a vacuous concern for designer clothes brands, expensive restaurants and haircuts is depicted to the extent that the men become interchangeable with each other and to have as much depth – soul – as the objects they consume. All is objectified to the logical extent of murder. It is unsettling. Unsafe. Dark.

You could say that, for Ellis, this is a confrontation with the dark side of the world. For him the contemporary world is a tyranny of ignoring this dark side with an insistence, as he would see it. of the overprotection, the mollycoddling, of a generation he names Generation Wuss in his tweets.

The central character, Bateman, is an actor in so far as he does not seem to have any connection with any true self. Ellis quotes Christian Bale in the film version as basing him on Tom Cruise, with his effusive pushed-out smile but dead behind the eyes. Ellis writes insightfully of Cruise while comparing him with the, for him, much more interesting Richard Gere – particularly his performance in American Gigolo (also exploring his own awakening sexual desire).

Need to be liked

He sees in actors a need to be liked above all and relates this to identity politics in a discourse where what can be said is only what should be said – a tyranny that reduces the complicated contradictory human being to a “virtuous robot”. For him people are acting out what is expected.

He grew up in the 1970s, when “The world wasn’t about kids yet”. He saw many age-inappropriate movies; he was only nine when his father takes him to see Theatre of Blood, “which was one of the more vicious and imaginatively bloody movies I’d ever seen up to that moment”.

The exposure to adult films at a young age would definitely contribute towards explaining his point of view. He admits that he is from the age of pessimism and sees a corporate fascism at work in movies producing right -on messages – he critiques Moonlight in this regard, and, while admitting the positive in it – the mainstream representation of a gay protagonist – he ultimately wants art that is assessed by aesthetics, not an ideological message.

In Aesthetic Theory, Theodor Adorno writes: “Autonomy, art’s growing independence from society, is a function of the bourgeois consciousness of freedom ... What it contributes to society is not some directly communicable content but something more mediate, ie resistance. Resistance reproduces social development in aesthetic terms without directly imitating it.”

Ellis wants aesthetic assessments, and for him freedom is escaping from the frame of what must currently be expressed; he cites Kanye West, Charlie Sheen and Trump as men who are free – (free to not give a damn), people (men) doing it their way and in the process generating a following.

That his own freedom would also be based on wealth – he comes from a well-off background, has a hugely successful writing career, earning large amounts of money for books, magazine pieces (enjoyably recounted interviews for sums of money he admits are unavailable today) – sometimes makes his criticism of the “victimisation culture” seem a bit rich – as though not realising that a rebalancing is in order and that other voices must have their platform to be heard.

Ellis uses the word “resistance” but applies it to what he describes as the shrill and irrational response to the election of Trump. He has friends in both camps but lambastes the outcry against Trump’s election, calling it childish, accusing the American left of being biased and creating a hugely divisive discourse (he admits that he didn’t vote and that he was not that interested in politics. Perhaps if he was he might see the bias and divisiveness as emerging from Republicans over many years – Reagan, Bush jnr, Trump and Fox News – rather than blame the left for suddenly introducing it in response to Trump).

Towards the end of the book Ellis writes of being invited to visit Kanye West (he had worked with him in the past) at the time when West was being vilified for supporting Trump and his sanity was being questioned by social media. Initially Ellis declines but West’s disappointment persuades him to change his plans. Then Ellis realises “that my hesitancy was colored somewhat by all that media coverage”. Here is the ostracisation at the hands of the dominant discourse in action.

This book is a refreshing and hugely interesting intervention in a debate about the nature of our times – is it the cry of a dinosaur or a timely injection of corrective truth? I recommend it.

I will leave the last words to the recently deceased, much loved and brilliant wild man of stand-up comedy, Ian Cognito:

“One day the world will be a better place, we will love each other and share things together. It won’t be a something for nothing world or everything for some, but fair shares for all. We will live in a world where there is nothing to be gained from making people look small and putting others down, and when that day comes, I’m fucked.”