The Irish Citizen Army, caught in the middle of Irish trade unionism and republicanism 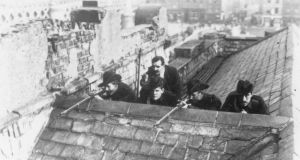 The history of the Irish Citizen Army, from 1913-23, was defined by complex relationships with trade union Ireland and republican Ireland. In what was effectively the “year of the militia”, the Citizen Army’s formation in 1913 was a type of anomaly. Unlike the Ulster Volunteer Force and the Irish Volunteers, it did not form solely out of the evolving militarisation of the Irish question.

Yet to adapt the prefix “Irish” and with “Transport Union” often included in its moniker, it was largely driven by the necessity for a workers’ defence corps. The translation of the ICA’s title in the midst of the Irish Civil War into Árm Lucta Oibre na h-Éireann (Army of the Working Class of Ireland) instead of the more direct translation Árm Cathartha na hÉireann, signified how this working-class tradition remained central to the force even as the collapse of the republican struggle neared.

Given that the use of this translation continued after the ICA’s break with the ITGWU, it was not suggestive of a static relationship with Ireland’s other labour bodies. Socialist republicanism was adhered to by the ICA throughout the decade. However, interaction with the ITGWU, its closest leftist organ, moved from parentage to outright hostility and criticism. The two bodies were most closely connected during the 1913 strike and lockout. In the midst of the conflict with William Martin Murphy and with no written charter of philosophy and purpose, the “airy nothing” that was the Citizen Army primarily existed for both the morale and the protection of those locked out.

With the collapse of the industrial effort, the ICA’s focus was gradually placed on territorial rather than class questions. Once a self-consciously created ideological position was formalised by the ICA in March 1914, through the adoption of a constitution, the national question was granted eminence. Throughout this period, the ICA’s ideology remained closely aligned with other labour bodies, as evidenced by the ITUC’s anti-partitionist statements during the Curragh mutiny. Despite this, union minutes highlighted criticism of the ICA in 1915 and fears of the attention their radicalism would bring in the months prior to the rebellion. ICA captain Frank Robbins, who continuously attended Branch No 1 meetings in the latter years of the decade, stated that antagonism was not present in the months preceding the Easter Rising. However, the seeds for the antipathy of the following years existed before the 1916 revolt.

The 1917-23 period saw a divergence of politics between armed labour and the rest of labour’s representative bodies. The departure of Larkin and the execution of Connolly removed the most extremist elements from the wider left spectrum. Likewise, after successive raids, the destruction of the Beresford Place building during the Easter Rising led to the ITGWU having a fear of British reprisals and a more acquiescent approach to authority.

An ambivalent response to the insurgency outlined in the ITUC’s 22nd annual conference was indicative of this process. The growing militarism over the ensuing years led to an increased isolation of the Citizen Army within labour circles. This long gestation period finally came to a head when the ICA was eventually forcibly removed from Liberty Hall in 1919. It was only after the cessation of hostilities with the British empire that a reappraisal of this relationship was considered by Branch No 1 of the ITGWU.

The major wedge between the two labour wings was the ITGWU’s fears of arousing the ire of the British authorities and the catastrophic consequences such wrath could have had for the trade union movement in Ireland. The ICA was far less concerned with such issues and was purposefully combative. Even after the agreement of peace terms with Westminster in December 1921, political divergence meant a return to the previous amicable association proved impossible.

Inversely, class dynamics and ICA antagonism towards the Irish Political Party led to initial criticism and hostility with the Irish Volunteers. However, over the progression of the decade, pre-existing nationalist principles and the intensification of the republican struggle led to a more aligned relationship between the two militias. The presence of the IPP, the industrial class and other moderate nationalist, as well as perceived strike breakers at the Rotunda in 1913 resulted in an inimical beginning.

Limits to IRB hegemony necessitated its appeal to moderate nationalists which isolated the Citizen Army from martial republicanism. Criticism and competition for resources between the two nationalist armies continued for the first six months of 1914. However, this trend was often ruptured by moments of co-ordination. Commemorations, response to the Howth gunrunning, and response to the Bachelor’s Walk shootings indicated that the animosity was a façade which temporarily hid a natural unity of purpose. The Redmondite break over the question of Irish Volunteer involvement in the first World War created an IRB-centric Irish Volunteers which allowed for immediate co-operation with their socialist brethren.

James Larkin’s position of chairman of the Irish Citizen Army also raised concerns from the IRB leaders regarding the viability of collaboration with the ICA. James Connolly’s assumption of the ICA’s command in October 1914 allowed for further progress on the road to Easter 1916. During his leadership all forms of resentment were eradicated. With the formalisation of rebellion plans established in January 1916, the ICA’s base in Liberty Hall began to be a hotbed for republican activity, extending to the Citizen Army’s soldiers acting as guards for the printing of the proclamation.

The Easter Rising acted as more than a joint venture between the two militias. For the soldiers belonging to the Citizen Army, the occasion created an entirely new republican army. Alongside leaders such as Tomás MacCurtain, many ICA combatants saw themselves as members of the newly constituted IRA, sharing the same martial structure and leadership as opposed to mere ideological agreement with their fellow Volunteer men. It was not until 1917 when ICA figures began to identify themselves as the Citizen Army again.

The desire for close co-operation continued throughout the ensuing years and by the outbreak of the Anglo-Irish War of Independence, leadership meetings between both republican armies occurred weekly. While this conflict never led to a manifestation of the same level of unity as seen during Easter Week, 1916, co-operation was typical and ICA intelligence was often passed over to the stronger army. Splits within the republican movement in early 1922 led to some ICA men joining the Free State army. However, the majority remained republicans, fought side by side with the “Irregulars” in the Four Courts, and continued to take part in the national struggle.
The Labour Hercules: The Irish Citizen Army and Irish Republicanism, 1913-23 by Jeffrey Leddin is published by Irish Academic Press