The Porpoise review: A chilling story ventures into dangerous lands 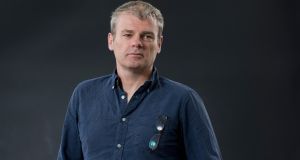 In the Porpoise, Mark Haddon weaves his story from a well-worn fabric. Photograph: Getty Images

When Mark Haddon was writing the opening of The Curious Incident of the Dog in the Night-time, his wife overheard him giggling to himself. She asked him what he was laughing at and he told her he had just written a scene about a dead dog, and thought it was funny. “Hmmm,” she said, “Do you think real writers laugh at their own jokes?”

So, the author of the world-renowned best seller wasn’t a “real writer” while he was writing it. What’s more, the rest of his career has been an exercise in trying to forget Curious Incident exists, so stifling is the weight of its success.

Still, he has managed to produce a poetry collection, a play, three novels and a collection of short stories since then - his most recent work, The Porpoise, containing, at its very heart, the notion of writing, or, more accurately: storytelling.

The Porpoise is a much darker affair than his breakout work. In it, a man loses his wife in a plane crash and is left to look after his new-born daughter, Angelica. Wracked by grief and mental instability, he raises her in seclusion, and begins to abuse her in ever more sinister ways as she grows. Stories act as a barrier for Angelica: an imaginative world into which she can escape when real life becomes too much. She reads old tales; ones “that set deep truths ringing like bells”. She sees herself as “both teller and listener”; forgetting “where the page ends and her mind begins”. While she cannot be physically free, she can be internally so.

Eventually, a young suitor, Darius, happens upon the situation. There is a chance he may save Angelica, but alas he has his own exploits to face. Thus, we are dragged on a romping escapade of a novel, one containing pirates, sword fights, time travel, Scythian horsemen. What on earth is going on here, you might ask. But what Haddon is doing isn’t original. In fact, he is using a tactic employed by real writers since forever: copying.

In his short story collection, The Pier Falls, Haddon reworked the myth of Ariadne and the story of Sir Gawain and the Green Knight, respectively. Here again, and like Angelica who recounts stories to herself, “changing them a little every time” and coming to believe that they are “stories of her own invention”, Haddon weaves his tale out of well-worn fabric.

The Porpoise is a reworking of Shakespeare’s lesser-known play, Pericles, Prince of Tyre, which itself is a reworking of the Greek tale of Appolinus/Apollonius. And not only is Shakespeare’s version “copied”, it was also written, for the most part, by someone else. (The first two thirds, they say, were written by the English dramatist George Wilkins.)

So, even before we open The Porpoise, questions of authorship and storytelling are at the forefront. Both within the book and without, layers of time, theme and character are overlaid.

The plot is slightly hokey, but the momentum is fast. Like many Shakespeare plays, this work begs to be read allegorically. It’s fun to theme-ize, categorize, etymologize. Motifs of wealth, madness, animal instinct and more permeate. Haddon writes clipped tense sentences, leads us to bizarre and beguiling places:

“They are at sea […]They must be sailing through a storm. She tries to sit up. She cannot sit up. There is a hard, flat surface in front of her face. She slides sideways and hits a wall. The bed flips over. She hits another wall. She is not in bed. She is inside a box.”

In fact, the box is a coffin, and we get the terrifying sense of being inside it, with the character, willing her out.

Indeed, this notion of a female trying to break free is what the whole work hangs on. Part of Haddon’s motive in “rewriting” Pericles was to right a moral wrong; to retell that long-overlooked story of the daughter of the King of Antioch. Her suffering is the engine that drives the whole plot – in the play’s opening she is raped by her father – yet she is rarely more than a device to set Pericles on his journey.

Here, Haddon gives her a name, arms her with a story, reminds us that her suffering might mean something. Were Haddon a female writer, The Porpoise might have been marketed as a feminist retelling of Pericles. As it is, the tale is all the more complex and chilling for his broaching of this subject. He ventures into dangerous lands.