Lotharingia review: Did the vanished kingdom foreshadow the EU? 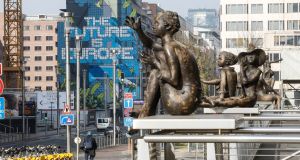 A mural reading ‘The Future Is Europe’ on a wall outside the European Union’s Charlemagne building in Brussels. Photograph: Dario Pignatelli/Bloomberg via Getty

Many of us know Brussels to be a delightful city, almost the definition of what a city should be. But why was it once part of France, once part of the Netherlands, once part of Germany, to now be the capital of a country where half the population can’t speak to the other half? Why does the Duchy of Luxembourg exist? Why were some of the crucial battles of the last century fought out on the forest tracks of the Ardennes and on the muddy banks of a shallow river called the Meuse? The answer, as Simon Winder shows, in this informative and always entertaining book, is Lotharingia.

Lotharingia can be defined as that huge stretch of land, including the Netherlands, Belgium, and large parts of France, Germany and Switzerland, that runs down through the heart of Europe from the North Sea to the Alps. Squeezed between the great states of France and Germany, it long ago ceased to exist, becoming one of Europe’s vanished kingdoms, like the Grand Duchy of Lithuania. But it continues to lead a ghostly afterlife. Above all, as Winder shows, much of what we think of as the great cultural inheritance of medieval Europe, its building and its art, are Lotharingian.

It all started almost by mistake in AD 843 with the Treaty of Verdun. After the death of Charlemagne, Holy Roman Emperor and ruler of most of Europe, his lands were divided up between three grandsons. One got Germany, then known as East Francia, one got France, called West Francia, and the third Lothar got the bits in between, then called Middle Francia, but later named after him, and later still the Duchy of Burgundy. This division remained more or less stable until the arrival of Napoleon almost a thousand years later. This middle land was a patchwork of independent cities and Duchies, which often seemed to have gone their own, increasingly prosperous ways, not much troubled by the distant, not-always-all-powerful kings and emperors. The prosperity was staggering. Cities like Bruges and Antwerp grew to be among the richest in Europe.

Winder, who is known for his playful histories, Danubia and Germania, has a very personal approach to history. Despite the huge research that has gone into this book, he wears his learning lightly, and much of it written in the form of personal travel memoir, as he explores the enormous cultural riches of this place. He describes himself walking home late from obscure provincial museums in medieval towns centres, to his cheap B&B on the outskirts, passing, as he puts it, through periods of housing: “new estates from the 1920s, post-bombing quick rebuilds from the 1950s or new estates from the 1960s.” Because war is ever-present in this vanished kingdom. Down through the centuries it has witnessed endless wars, massacres, plagues, cities have been razed to the ground and raised up again.

But somehow, the art has survived. Or at least some of it. As Winder points out, the art we now possess is only a fraction of the original heritage. In the 16th century the Protestant iconoclasts swept through this region, destroying images, in the famous Beeldenstorm. Cathedrals were turned into vast, white, empty spaces, and huge bonfires lit with some of the greatest art ever made, about which we can only conjecture.

Winder is at his best when writing about people such as Dürer (“My favourite German”), Hieronymous Bosch, Holbein. His deep appreciation of their work allows irreverence. In Ghent he visits St Bavo’s to see Van Eyck’s astonishing Adam and Eve, naked in the Garden. He notices the later panels painted on the order of the Hapsburg Emperor Joseph II, which had them clothed in furs, so that, writes Winder, they are “transformed from being burdened, austere parents of humankind into Flintstones swingers”. Visiting Lille Museum, he ponders “whether modern Europe is simply too weighed down by the rubbish of the past. Should the whole lot be gathered in a huge net, picked up by a helicopter and dumped off the Florida Keys to create a fabulous basis for a new reef, for example?” A sentiment that even the most ardent cultural tourist in Europe has occasionally, shamefully, entertained.

In the end the rise of the nation state in the 19th century finished off Lotharinga, with the Grand Duchy of Luxembourg an anomalous chunk left over. But perhaps it lives on in other forms. After all, the six Lotharingian or semi-Lotharingian successor states went on to form the core of the European Union, and it cannot be by chance that its capitals are the three great Lotharingian cities of Brussels, Luxembourg and Strasbourg, with Charlemagne increasingly emerging as its patron saint. Many European thinkers still dream of a federal Europe, with a distant, benign leadership presiding over increasingly autonomous, self-ruling regions. That imagined Europe, with its patchwork of languages, religions and rulers, sounds a lot like Lotharingia.