Then it Fell Apart review: Endearing and often alarming 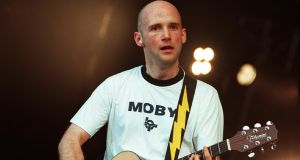 Moby performs at Slane in 2000, the year after his wildly successful album Play was released. Photograph: Frank Miller 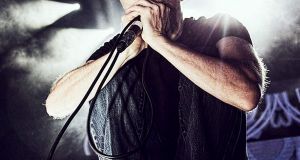 Book Title:
Then It Fell Apart

“I went to the windows, barely staying upright. I wanted to throw myself out, fall 450 feet through the warm air, and land on concrete… I went back upstairs… the upstairs windows opened a few inches for air, but not enough for me to squeeze through. I lay down on the thick carpet in my master bedroom, sobbing and apologising to God and my dead mom for being such a disappointment.”

There are many more examples of Moby’s low self-regard dotted throughout this endearing if often alarmingly honest book that tracks the American musician’s life from 1999-2009. The second volume of his memoirs – the follow-up to 2016’s Porcelain, which focused on his life from 1989-1999 – differs significantly in that he writes just as truthfully about his upbringing. With Porcelain, Moby recounted his early days as a jobbing maverick musician and producer, living in just-above-poverty-line conditions in New York City. Then it Fell Apart swiftly takes up the story, recounting in vivid detail the release of his fifth album, Play, which went on to not only sell ten million copies in just over a year but had each of its tracks licensed internationally for use in television shows, advertisements, and movies.

From growing up on welfare and food stamps, and then living in NYC in a small loft, to making enough money to buy outright (for $6 million) a luxury multi-storey penthouse apartment on the Upper West Side of Manhattan, you could safely say that, from the outside at least, Moby’s circumstances radically improved. The issue that permeates a good portion the book, however, and one he successfully grapples with, is that while he had fallen deeply for the trappings of success (“especially the sex and alcohol and fame”) he was panic-stricken at its impermanence. The realisation that he had been handed the keys to the kingdom only to deliberately drop them down a drain while spectacularly loaded takes a while to process, but the writing of such is smart enough to draw the reader in as one entitled, self-absorbed year follows the next.

With chapters alternating between childhood and post-Play fame, a dynamic is maintained from start to end. Richard Melville Hall was born in Harlem, Manhattan, on September 11th, 1965, his lifelong nickname obliquely referencing his great-great-great uncle, Herman Melville, author of Moby Dick. When Moby was two, his chemistry professor father died in a car accident, which triggered a sequence of downward spirals as his mother raised him from one part of the US to another for some years.

Music was a constant in Moby’s life, from a teenage hardcore band (Vatican Commandos) to post-university DJ work in 1985, which is when he became less enamoured of punk and indie bands and more into hip-hop and dance music. Such relatively innocent times (“I was happy playing music at 2pm in an empty bar… but someday I wanted an audience. It didn’t have to big – I just wanted someone to notice me.”) are weighted against later years of excessive overindulgence.

Something had to break

From touring his two most successful albums, 1999’s Play and 2002’s 18 (“a perpetual road trip party with huge concerts, unceasing drunkenness, and almost effortless promiscuity”) to performing “in smaller venues to smaller audiences who just wanted to hear older songs”, the path from unprecedented fame and its supposed comfort blanket to ordinary living seems all too familiar. For Moby, something had to change, but in order for that to happen something had to break.

In late 2007, advice from an unnamed “old, well-known musician” finally hit home, and so Moby concludes the book with a stoic, weary admission: he needs help, not just with alcohol and drugs but also with facing his anxieties, dysfunctions and startlingly low self-esteem issues that made him an alcoholic/addict in the first place.

In the hands of a less engaging writer, such travails might have turned into a litany of failures that disconnected a reader’s full attention. Moby, however, peppers the details with skyscraper height name-dropping (Natalie Portman, Christina Ricci, Ivanka Trump, David Lynch, David Bowie, Lana Del Ray) and droll anecdotes (“I was visiting David Bowie as a friend. As a peer… Bowie was the greatest musician of the 20th century, while I was a bald degenerate with an accidental hit record”) that regularly turns a desperately unhappy memoir into a pick-me-up holiday read.