A GP’s work-lifesaving balance: ‘I could not care for others if I was not caring for myself’

All in a Doctor’s Day author on balancing life as a country GP, mother and friend 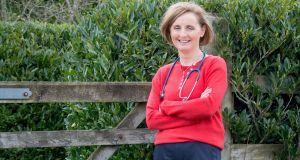 Dr Lucia Gannon: “I have often thought that I put people off their pints, simply by being in the local pub and asking them how they are”

Once a doctor, always a doctor. In the opening lines of my new book, All in a Doctor’s Day, I tell of how I wake in the early hours of a dark, windy February morning and realise that I have to get to hospital straight away. My waters have broken, my baby is breech and, even though I have a section planned for the following day, this plan must now change.

When I go back to the bedroom where my husband Liam, also a GP, is supposed to be sleeping, I find him on the phone, taking down details for a house call. Liam has been on call for the weekend and this is a patient who wants him to come out and see him before his Monday morning surgery. I have no idea what’s wrong with the patient, but I know that Liam now has to bring me to hospital and find someone to take care of our two children, aged six and four. Our childminder had told me, just the day before, that she was ill and unavailable to work for the foreseeable future.

I had not been able to find a locum doctor to cover my maternity leave for the busy GP practice that Liam and I shared and had worked up until just two days before the planned section. We were contracted to provide care for our patients for 24 hours a day, 365 days a year and this is what we had to do.

Our only plan for emergencies such as this was to ask our colleagues in the neighboring practices of Fethard and Ballingarry to cover our patients. Nowadays, there are co-operatives of GPs that cover the out of hours but in those early days we had organised with our colleagues to do a one-in-four rota, which meant we were only on-call one night in four. Of course, there are times when emergencies happen and because of the distance from the nearest hospital, we are still first port of call for those regardless of the hour or which GP was on-call.

Before we built the surgery, we used a room in our house to see patients out of hours. It was not unusual to have people sitting in my sitting room or hallway, waiting to see one of us while the other one, usually me, tried to keep our two children occupied, cook dinner and keep some appearance of order and normality. When Ailshe, our daughter, was younger she liked to go into the surgery room if it looked like there might be something to see, like a head that needed stitching, just up from the hurling field. She imagined she could give a hand.

One of the funniest times I remember someone calling out of hours was one New Year’s Eve when we were not on call and had finished up in the surgery at about four o’clock. I was in the kitchen getting dinner ready when I heard a tapping on the kitchen window. Looking out, I was startled to see a face peering in at me, indicating that she wanted my attention. I went to the door and the woman said she was a patient of mine, although I did not recognise her. She told me she had been to the surgery, but that there was nobody there and that she needed her blood pressure checked. Our regular patients knew us as well as we knew them and would never call us unless it was an emergency.

We found balance by being consistent. We knew we were in for the long haul and we wanted to live in the community but I could not be available 24 hours a day. I knew I could not survive this. I knew our family was too important to sacrifice it for any job. I knew from hospital medicine that I was only able to do my job when I was rested and interested and then I could care. I could not care for others if I was not caring for myself.

The co-operative started in 2000. Liam was actively involved in setting it up with the neighbouring GPs. Initially, many patients and GPs thought it would never work but we had worked in the UK where one doctor would cover a large population of patients and we knew it could. It took a bit of adjustment for both doctors and their patients, but if someone called to our door when the co-op was on call, I would firmly and politely tell them how to access the on-call doctor. In truth not too many people did call to us and, if they did, they usually asked for Liam as they assumed I would be busy with the children and the household tasks when, in effect, we tried to share these as best we could between us.

As I outline in my book, we made a conscious decision to have easy access to our house in case someone needed us in an emergency, and decided not to put gates up at the entrance. This did lead to a scare where our two-year-old escaped onto the main road but was thankfully rescued by a passing stranger. Emergencies in rural practices are usually heart attacks, seizures, road traffic accidents, strokes or shortness of breath. We have to maintain our competency in emergency care and always have emergency equipment close at hand. A road traffic accident call could be very serious or, as in Dan’s case in one of the stories, a fairly minor incident. Still, there’s no point arriving at the scene without the proper equipment in case it is a serious accident.

Of course, it’s not just emergencies that can be difficult. Living in a small community as the local GP can make for some interesting everyday encounters. Going out socially can be tricky. I have often thought that I put people off their pints, simply by being in the local pub and asking them how they are. This could lead to an impromptu bar-side consultation. Yet not asking someone how they’re doing could be interpreted as quite odd or rude. In the early days, it was difficult to judge the level of conversation that I and others were comfortable with.

As I say in the book, making friends was also a bit of a challenge. I could not trade in gossip, could not get embroiled in local politics and never knew who might be related to whom, so I seemed to always be watching what I said when out. Liam talked GAA and found social interaction much easier than I did.

It wasn’t always easy be professional and friendly but I have become much better at it over the years and rarely find myself without something to say or someone to listen to. Twenty-three years later, I’m still a blow-in in Killenuale but I now have wonderful relationships with my patients, not just as patients, but as friends, neighbours and I feel part of a community that I love.

All in a Doctor’s Day: Memoirs of an Irish Country Practice by Dr Lucia Gannon, published by Gill Books, is out now, priced at €16.99 and available in all bookshops and online