Joshua Cohen: 'I am a partisan of the parochial'

The author's latest book is about 'Israel and Palestine; it’s about gentrification; it’s about race relations in the US' 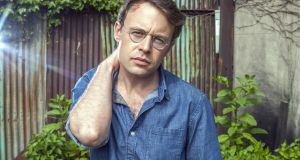 Joshua Cohen: “I am a partisan of the parochial.” Photograph: Danny Ghitis/The New York Times

Listening to Joshua Cohen, you quickly begin to see how the 37-year-old has managed to publish half a dozen novels and a few collections of stories – not to mention volumes of essays and reviews – in such a short career to date. The New Jersey native speaks in long sentences, with thoughts expanding both rapidly and discursively towards an unknown destination.

He is witty and passionate, sometimes brusque – he begins a review of Jonathan Franzen in the London Review of Books with the line, “What’s the German for a writer who resurrects a writer who would have hated him?” – and interested in almost everything. He speaks Hebrew and German, worked as a roving reporter in central and eastern Europe for several years, and wrote one book live on the internet.

His latest novel, Moving Kings, is shorter and more straightforward than much of what has preceded it – Witz (2010) and the widely-acclaimed Book of Numbers (2015) run to some 800 and 600 pages respectively – but it is just as dense, insightful, and funny as those earlier works.

Moving Kings is set in New York and New Jersey, and follows a gang of professional movers – the guys in overalls and gloves who come to pack up your belongings and move them somewhere else; the men in vans clogging up the streets of Brooklyn and Queens; the crews headquartered in warehouses in vast, anonymous industrial estates. And yet its romantic origins belie its workaday subject.

“I’d always wanted, from a fairly young age, to write a Conrad or a Melville novel,” says Cohen. “Which is to say, I wanted to write a book where a bunch of people from many different ethnic or racial backgrounds find themselves on a boat in the middle of the ocean, having to deal with each other. Because we didn’t grow up in the era of boats, my multiethnic, multiracial crew sort of had to be a moving crew. And the ship had to be a moving truck.”

The captain of this ship is David King, a middle-aged man from New Jersey with a divorce, a grown-up kid, and a tepid affair with his office manager under his belt. Despite the ostensible success of his business, King is struggling to find a sense of purpose and direction in his life.

When an opportunity arises to surreptitiously lodge significant amounts of cash into an Israeli bank account, he flies across the world and spends some time with his Israeli cousins, whom he doesn’t really know and yet envies for their connection to a culture and a history larger than themselves.

When Yoav, David’s 22-year-old cousin fresh out of his stint in the Israeli Defence Force, arrives in New York several years later, David is more than eager to welcome him into the American wing of the family, giving him a job and bolstering his own ties to that mythical Israel which has formed in his mind.

“He gains this entire identity which makes his own existence seem richer,” Cohen says of David’s burgeoning interest in the land of his forefathers. “Suddenly he’s not just a guy, a small businessman in Jersey; suddenly he feels a greater connection to the richness of Jewish history and suddenly he feels more authentic. He feels more rooted, in a way. I feel like how these things play out on the family level is much more interesting than even how these things play out on a political, identarian level.”

These relationships between individuals and their families – chosen or otherwise – are the minor dramas which make up most of Moving Kings. While trying to survive the turbulence and conflict of contemporary urban life, the characters are also attempting to understand the ways in which they see themselves, and how they are seen by others.

It’s a particularly poignant journey for Yoav, who, more than most, feels the weight of his Israeli family and heritage as a burden. One of the book’s most climactic emotional moments involves Yoav finally speaking his frustrations aloud, demanding space to explore his own thoughts, free of the expectations and limitations of his inheritance.

“To my mind this is a novel that doesn’t want to judge or make political judgments, it wants to show the making of a mind, or show the process by which a mind comes to political maturity,” Cohen says.

“I think that that speech by Yoav is really just his frustration with being unable to even have an idea of what it would be to be just himself. Just an individual. Just a person with a deeply specific, deeply particular mind, that can’t be read as an attribute of his identity.”

Yoav is soon joined in New York by an ex-army mate, Uri. Through broken English – or, in Uri’s case, no English at all – they attempt to navigate the transitory, unpredictable world of the moving industry. They communicate in short bursts, with Yoav translating for Uri, while around them swirls the teeming conversation of their multi-cultural workmates. They make fun of each other constantly, they talk about their other jobs and boast of their women, they discuss their hangovers and detail their adventures. Through it all, their occupation colours everything.

‘Language of the trade’

“The prime subject of intellectual interest in any real trade is the language of the trade,” says Cohen. “The way in which that trade can colour the way you see everything else in the world, the way that once you see the world through the prism of your labour, the prism of your work, the entire world takes on the same outlines.”

Cohen takes a real pleasure in the particularity of these characters, the tightness and directness of their reference points, the colour and wit of their language.

I have many ideas of what I believe and what I think. And they’re constantly in conflict

“I am a partisan of the parochial,” he says, and reading Moving Kings, you believe him. It’s a book at its best when tied up in the on-running thoughts of its main characters, spiked with deliciously barbed turns of phrase, blending intensity and humour in equal parts.

At the same time, the book is almost old-fashioned – certainly out-of-step – in its desire to be about things. It’s about Israel and Palestine; it’s about gentrification; it’s about race relations in the US. Characters emerge which are perhaps more ideas than people, existing in order to point to something beyond themselves; navigational aids for the politics and culture of the world Cohen is attempting to recreate.

Moving Kings is a deeply realist novel – shorn of the self-conscious autofictional parodies and technological experiments which animated Book of Numbers – with little but keen cultural observation and a nagging set of questions to sustain it. At a time when people so often appear to drown in the truth, or spend their lives chasing a liveable version of it, Cohen seems most interested in the power of literary realism to get a reader out of their own heads, away from what is true and towards what we might feel to be real.

For him, the spark is always in finding ways for subjects and ideas and people to come into contact with each other, to illuminate and expand each other.

“It’s funny to me, funny and tragic, that we’re at a time in which people read metaphors as if they’re analogies, or as if they’re mathematical equations,” he says. “I see them as collisions, as car crashes. A metaphor in my mind is that you take one idea, and you take another idea, and you smack them up against each other because you say one should be inside another. And you ask people to react, to feel something at the wreckage. You ask people to have a response to the carnage that ensues. You allow that response to be a test or a trial of their own sensibilities, of their own politics, and of their own aesthetics.”

This is very much the view of a writer who has, in the past, said he became an author in order to hide. Cohen is nowhere present in Moving Kings, but his personality, his ideas, and his beliefs are everywhere apparent. They’re just spilled out through the pluralist voices of his characters, living their complex, humdrum lives, bumping into each other along the way.

Moving Kings is out now, published by Fitzcarraldo Editions