A compelling portrait of Dublin and its famous mayor

Alfie: The Life and Times of Alfie Byrne review: Trevor White animates an overlooked Dublin legend, vividly evoking the past 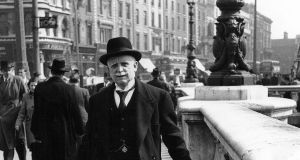 Alfie Byrne was a mass of contradictions: a man fond of grandeur, yet who prided himself in fixing his own push-bike. A politician seduced by the pomp of Westminster, who didn’t mind getting his boots wet when the occasion arose.

Right before the Celtic Tiger was stuffed and mounted, Trevor White – then editor and founding publisher of the Dubliner magazine – turned a high-powered acumen towards the modern restaurant trade in Kitchen Con. Three years later in 2010, The Dubliner Diaries, an account of his final few years at the ill-fated magazine, followed. Both titles oscillated between authoritative, revealing and occasionally preening. But there was little denying it: White had a knack for pinching hold of the zeitgeist, and capturing the cut and thrust of a certain time and place.

Making modern-day Dublin jump off the page is one thing: quite another is to make early 20th-century Dublin do similar, and with the same energy. But with Alfie Byrne as his conduit, White has breathed something akin to glamour and drama into the era.

It’s safe to assume that White knows a thing or two about the man who took office as lord mayor of Dublin in October 1930. In the Little Museum of Dublin – another of White’s successful ventures – a permanent exhibition on Byrne holds pride of place. Byrne’s son, Patrick, donated about 4,000 personal effects to the museum, among them diaries, unopened letters and leather-bound press books. The generous gift is writ large in this well-researched book.

The likely reasons that Byrne caught White’s imagination are myriad: after a hard-knock childhood in the north inner city, Byrne was briefly a contemporary of James Joyce and Sean T O’Kelly.

“Byrne had tangled roots, like many Dubliners,” writes White. “Town and country, Catholic and Protestant. In thrall as a young man to Charles Stewart Parnell, Byrne became, of all things, a teetotal publican, purchasing the Verdon bar on Talbot Street for £500. It was over the bar that he truly got to know the inner workings of the city; the mechanics of power and influence in a community: how to flatter and win trust, how to tell a story, how to settle arguments, how to exude authority.”

Elected to Dublin City Council at 28, Byrne remains the only politician to serve as mayor, Dáil Éireann deputy, Westminster MP and Senator (his efforts to become president of Ireland were ultimately scuppered). Elected 10 times into the mayoral role, he would become the highest-paid politician in the country, and hired a coterie of new staff when he became lord mayor. A story in The Irish Times reported that he would spend more money on postage in a week than any four of his predecessors combined. Up to a point, and before the siren song of property development, he channelled much of his energies into helping Dublin’s poverty-stricken denizens.

White has found a deliciously rich seam to mine in Alfie Byrne, and paints a suitably charismatic character. He’s a mass of contradictions: a man fond of grandeur, yet who prided himself in fixing his own push-bike. A politician seduced by the pomp of Westminster, who didn’t mind getting his boots wet when the occasion arose. Towards the end of the book, White makes a case for the theory that the character of Alfred Pennyworth – the butler in Batman – was based on Byrne. Weighing up the striking similarities, he concludes: “the rumour is probably wrong, but it hardly matters, because every city needs its legends, and that is the truth about Alfie Byrne and Batman”.

Though the book occasionally veers towards the hagiographic, White concedes that Byrne was a politician not without his flaws.

That Byrne, for his many distinctions, got lost in the shuffle of 20th-century history is clearly an injustice White feels acutely. In contrast to his great rival Jim Larkin, remembered with a statue at the head of O’Connell Street, an ornate memorial throne in Clontarf was removed by Dublin City Council in 2015. “The press mentioned vandalism and years of neglect,” writes White. Most gallingly of all, Byrne was given the Freedom of Kilkenny the Freedom of Toronto, but not the Freedom of Dublin. “The prominence of Larkin – who never once secured more votes than his rival – does raise a pertinent question: whatever happened to Alfie Byrne?” asks White. Despite the wealth of detail presented, White’s book never quite gets to the real nub of this question.

As supporting characters go, early-20th century Dublin is almost as deft at the job as Celtic Tiger Ireland was in White’s previous fare. A well-researched and forensic account of a historical figure is one thing, but White’s USP as a writer is to take the temperature of the city to impressive effect. Here, Byrne’s Dublin is revived in glorious Technicolor, and with much affection. It’s a lively, boisterous, contradictory, occasionally maddening place. Much like the man himself, really.