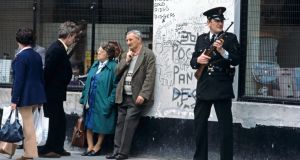 An RUC man on patrol in Belfast during the Troubles. Photograph: Alain Le Garsmeur/Getty Images

In Rain Dogs, Adrian McKinty offers an intricate narrative that reflects sharply on varied matters including sexual abuse, imperial decline, women having to travel for an abortion, and Northern Ireland’s particular economic and political status. Holding all of this together is McKinty’s protagonist Sean Duffy, whose voice lends the novel a kind of deceptive ease that is only ever achieved with great care. This may be stating the obvious, but Duffy as a character drives the series, notably so in a genre often mistaken as exclusively about plot.

Duffy is idiosyncratic in a way that acknowledges genre types – when his postgrad student girlfriend Beth leaves him, he pleads that she’ll “be contributing to a stereotype which from your literary theory essays I know you hate. The policeman with dependency issues and girlfriend trouble” – without ever merely conforming to them.

Like Duffy, the series is very aware of these genre conventions. Where the first novel, The Cold Cold Ground (2012), occupied readers (and Duffy) with what appeared to be a serial killer before becoming something quite different, Rain Dogs does something similarly effective with the idea of the locked room mystery, one of crime fiction’s longest-standing plots. Once again, though, McKinty shifts the ground beneath our feet, taking the reader somewhere more surprising in the process.

The Duffy novels are anchored in the Troubles and insistently looking outward, both deeply rooted in their place and intimately engaged with more distant forces

As a narrator, Duffy deflates his own poses even as he strikes them. His musical tastes are broadly small-c catholic but decisive (I’ll not spoil Duffy’s punchline, but at one point he scornfully asks a younger colleague “What’s the difference between listening to U2 and shitting yourself?”).

Though his bleak humour and abundant profanity are dramatic enough, they never overshadow the rest of the book. Instead, McKinty surrounds Duffy with distinctive characters, like his stolid colleague DC McCrabban, a man by whom the word “optimistic” is “only ever used pejoratively”.

Crucially, this is very much a chronological series in which Duffy ages and develops, as he himself recognises. The series remains immersed in that experience, with little intrusion by more recent perspectives. (A rare departure from the narrative timeframe comes when Duffy observes “a folded-up copy of the Sun on a chair near the double doors. A couple of years from now, in the wake of the paper’s Hillsborough coverage, you won’t be able to get the Sun anywhere in this part of Liverpool. But that’s in the grim tomorrow and we’re still in the grim today.”)

McKinty’s commitment to these characters’ individual experiences of Northern Ireland helps ground Duffy’s view that 1980s Belfast forecasts the future more than it echoes the past: “Belfast is the prototype of a new way of living. In 1801 it was a muddy village, by 1901 it was one of the great cities of the Empire, and now Belfast is the shape of things to come. Everywhere is going to look like this soon enough after the oil goes and the food goes and the law and order goes.” This passage is emblematic of the series, which turns on its head the familiar image of Belfast as an ancient quarrel intruding on the otherwise happily modernising present.

This international scope appears across the series, from Finnish telecom executives looking to set up a factory in Rain Dogs back to the DeLorean Motor Company’s collapse in an FBI sting in I Hear the Sirens in the Street (2013). The common thread to these episodes is a sense of Northern Ireland as subject to larger forces: MI5 and MI6, transnational corporations, American interests, and the downward spiral of the British Empire.

Across the series, such forces bat Northern Ireland around at will, in the service of their own external priorities. As this pattern suggests, the Duffy novels are at once anchored in the Troubles and insistently looking outward at the same time, both deeply rooted in their place and intimately engaged with more distant forces; not for nothing did Val McDermid suggest in her essay for this Book Club series: “If you want to understand where we are in 2017, read Rain Dogs”.

For all of Duffy’s banter, wit, and narrative energy, Rain Dogs – like the other books in the series – is capable of an impressive stillness, too

For all of Duffy’s banter, wit, and narrative energy, Rain Dogs – like the other books in the series – is capable of an impressive stillness, too. This is clearest in a scene on the boat to Liverpool, when Duffy accompanies Beth on “the Great Abortion Trail walked by thousands of Irish women and girls every year”. As do Claire McGowan’s Paula Maguire books, and as did Christina Reid’s The Belle of the Belfast City before them, the Duffy series uses this narrative strand to highlight the disjunctions and fault lines of Northern Ireland.

The scene is also, however, a moving moment anchored in character, in the experiences of both Beth and Duffy, and in empathy for the other women travelling to Liverpool. This empathy is clearest when Duffy describes the other passengers after a night on the boat: “This side of the cafeteria has at least a dozen single women staring at cups of tea and coffee, tears in their eyes, ciggies in their hands. One of them approaches. She’s about fifteen. ‘I couldn’t get a smoke, could I?’ I give her the entire packet and go up on to the freezing observation deck. Stand there for a long time, getting cold.”

Passing with little overt comment, this scene has more weight precisely because it is not part of what seems to be the main narrative, and does not move the main plot forward. Instead, it focuses readers’ attentions on the lives that happen while plots are taking up the foreground of our stories. Such moments are central to the ways Rain Dogs, with a quietly insistent empathy, uses all the tools of crime fiction to draw its reader into the fullness of life amidst a society’s crises.
Dr Brian Cliff, Assistant Professor in the School of English at TCD (currently on leave), is completing his book Irish Crime Fiction for Palgrave. Rain Dogs by Adrian McKinty is October’s Irish Times Book Club pick. The series will culminate in a public interview with McKinty conducted by Irish Times Books Editor Martin Doyle in Belfast’s Europa Hotel (Europe’s most bombed etc) on Saturday, October 28th, at 1pm as part of the inaugural NOIRELAND International Crime Fiction Festival, which runs from October 27th-29th. The podcast of the interview will be available on October 30th