The women’s bodies lay on the floor, empty carbolic bottles beside them 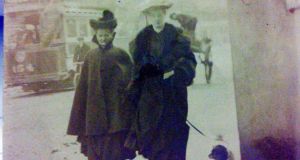 Bellina and her mother Nina J Prior in 1905 in Dublin

On Wednesday morning, November 24th, 1909, when Constable Lawrence Cavey climbed in at the rear window of 2 Charleville Road, Rathmines, in Dublin, he was doing so at the behest of the Society for Protection of Cruelty to Animals. They had been contacted by neighbours distressed at the yelping sounds of two dogs in the house. The dogs had been giving cause for concern for over two weeks, their owners – two eccentric ladies, a mother and daughter – had not been seen in that time, the blinds had been drawn, and some said the women had gone to London. Tired of throwing scraps over the wall, the concerned neighbours had contacted the SPCA.

Constable Cavey rescued the dogs but on entering an upstairs bedroom he discovered a more pitiful sight. The bodies of two women lay on the floor, and near them were two empty bottles of carbolic acid. A suicide note, written by the mother, was dated November 7th. An inquest was held on the 25th, and the women were then buried in Mount Jerome cemetery. Their grave is unmarked to this day.

The women in question were Nina J Prior (66), a widow, and her daughter Bellina Prior (43). They had been living in Rathmines for about five or six years, keeping largely to themselves. Bellina referred to herself as Mrs Beresford, although there was no evidence of a marriage, and locals knew her as The Pink Lady after a particular outfit she was fond of wearing. However, behind these quiet eccentrics – or not so quiet, as Bellina was once removed from the Empire Palace theatre for hissing and causing disturbance during a variety show – there lay a murky past.

Nina J Hadaway came from British military stock, her father Scottish, her mother from Corfu, and in India in 1862 she married a soldier, John De Montmorency Murray Prior, who would rise to the rank of Lieutenant-Colonel. Nina was some 20 years younger than her husband who had fought in the Crimea, South Africa and India, including the 1857 Mutiny. Three of their four children, John, Adele and Bellina, were born in India, with younger son Harvey being born in London in 1873, the year Lt-Col Prior took up his last post in the city of Armagh. Within three years of this, however, Lt-Col Prior died of phthisis, leaving 33-year-old Nina to bring up four young children. She decided to remain in Armagh and moved the family to Vicars Hill, a pleasant terrace of houses facing the Church of Ireland Cathedral where Brian Boru is buried.

Fast-forward 12 years to 1888. On the afternoon of Tuesday, March 27th, a young local girl, Catherine Slavin, who used to run errands for the now-grown-up Prior sisters, called, as requested, to 6 Vicars Hill, to leave her 3-year-old sister Annie in Bellina’s care. Sometime later, Bellina, who had taken Annie down to the basement kitchen for food, ran upstairs to the parlour and in a distressed state told her sister Adele “I have killed the child!” Adele ran down to the kitchen to find little Annie drowned in the cold water of the boiler.

Bellina Prior was subsequently found “guilty but insane” of the murder of Annie Slavin and served four years in Dundrum Asylum before being released into her mother’s care, with the restriction that they must not return to Armagh. The two women lived for periods in London, Warrenpoint and finally, and fatally, in Rathmines.

For generations of Armagh children such as myself, that house on Vicars Hill was one to run past or avoid altogether. A legend of The Green Lady – some vague, wicked or disturbing presence – grew over the original story, and only in recent years, thanks to local historians such as Sean Barden, has it again come to light.

Portraits of the Irish big house, from Castle Howard to Luttrellstown
4