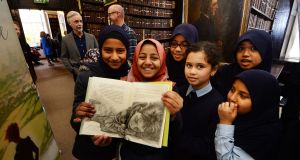 Jumanah Nahari with fellow pupils from the North Dublin Muslim School at the launch of “Once Upon a Time” by Eoin Colfer and illustrator PJ Lynch. Photograph: Cyril Byrne

I had lots of fun selecting “Ten Books to Read Before You Are Twelve” for this year’s Dublin Book Festival. Fifty copies of the books, containing a personal message from me as Laureate na nÓg, will be dropped at locations around the capital next Wednesday and it’s up to eagle-eyed young readers to find them. What a great way to get out and see the city during the midterm break! And don’t worry – there isn’t a worthy or boring title among them.

Quite the opposite in fact. Most of them are funny and some are even quite rude, but they are all brilliant to read.

My first choice has extraordinary pictures and lots of wonderful poems for children from Ireland’s leading poets. Something beginning with P is a very special book. Edited by Seamus Cashman, it features poems by Seamus Heaney, Paula Meehan, Brendan Kennelly and many others. The illustrations by Alan Clarke and Corrina Askin are spectacular and fun, making this a sumptuous book to treasure.

I’m a Happy Hugglewug by former Laureate na nÓg Niamh Sharkey is a super book for younger children who will probably be familiar with Sharkey’s Hugglemonsters from the Disney Junior animated series. Here’s the book that inspired the series! Niamh will be drawing on our Big Picture Wall at the Dublin Book Festival along with another author from my list, Chris Judge. At first, his Lonely Beast seems a very unlikely hero, but though he looks scary, he is actually very kind and lovable. Therein lies a lesson for all of us about judging by appearances.

I was first attracted to Mary Webb’s Gulliver because of the brilliant illustrations by Lauren O’Neill. In this retelling of Swift’s classic, she really captures the hugeness of Gulliver and there are lots of funny details when you examine the pictures. Webb’s writing makes this timeless tale accessible to younger readers.

As an illustrator myself, I have gone for lots of books with pictures, including one you could call a “silent book”. Marie-Louise Fitzpatrick’s Owl Bat, Bat Owl tells a story entirely through pictures, without the need for words. Young readers will enjoy the humour and the mischief, but there is an important message about getting on with your neighbours in there too.

Walking past my local bookshop, Alan Hanna’s in Rathmines, the other day, I was delighted to see The President’s Glasses by Peter Donnelly in the window display. I know this book will be a big hit. He has been working as an illustrator for many years but this is his first picture book. One resourceful pigeon is on a mission to find the President and return his glasses, treating readers to stunning bird’s eye views of Dublin.

Historopedia, meanwhile, is a beautifully designed, large-format book with maps and illustrations by Fatti Burke and quirky snippets of myth and history written by her father, John. This book really brings Ireland’s past to life in a fun way for children.

When it came to picking a book by Oliver Jeffers for my list, I was spoiled for choice, but settled on The Incredible Book Eating Boy. It’s a wonderful fable for book addicts of any age, and it was a huge favourite with my own kids. If this cool and funny book doesn’t get children reading books at least they might start nibbling them.

I’ve found humour is often what turns kids on to books, and that is why I chose The Giggler Treatment by Roddy Doyle – a ripping yarn that’s a little bit rude, making it all the more appealing! There is plenty of text for confident readers but it is broken up by some cool drawings by Brian Ajhar.

Lastly I had to include Once upon A Place. Edited by former Laureate na nÓg Eoin Colfer, it’s a brilliant collection of stories and poems by many of Ireland’s top writers: Derek Landy, Oisín McGann and Sarah Webb, to name just a few. I have a real soft spot for this one as I got to do the illustrations!

If you find one of these books during the Dublin Book Festival, pick it up and give it to a child you know. You are giving them more than just a story, you are opening their eyes to a world of possibility. Better still, read it with them, and remind yourself how magical it feels to get lost in a book.

Hunt for the Wilderpeople review: super all-ages adventure with a hint of danger
5