Kate Wilson: I wanted also to make a book that helped people see the natural world 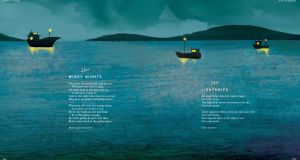 I Am the Seed That Grew The Tree by Kate Wilson

For my seventh birthday, my parents gave me a book containing – like this one – hundreds of poems. It was a small, fat book without pictures. At first I found it daunting: without pictures there was nothing to catch my eye, nothing to lead me into the book.

But one wet afternoon after school, I took it down and began to read. And that was it for me: I fell in love with poetry, with rhyme, with rhythm, with the way that poetry squashed big feelings, big thoughts, big things into tiny boxes of brilliance for the reader to unpack. It became my favourite book. I have it still. It is stuffed with little slips of paper that I used to mark the poems I liked best. As I grew older, those poems changed: a poem that baffled and bored me when I was seven revealed itself to me a couple of years later. I learned many of them by heart, and could recite them to you now.

When I was that seven-year-old child, I lived in a very small house with a very big garden on the outskirts of a city. The house was quite new, but the garden had old trees in it – a lilac, a holly and an apple tree so climbable it seemed as if it had grown itself with climbing children in mind. Those trees were alive with small birds and, one spring, there was a nest with blue eggs in it and, later, three shockingly naked baby birds with gaping beaks that seemed to split their heads in two. Hedgehogs sometimes snuffled across the grass at night, and one wet spring I saw two frogs. There were daisies and dandelions and buttercups, and a flower so astonishingly complex and beautiful that I thought it must be magical. I later learned it was called a columbine. I spent hours in that garden, looking and learning.

I grew up. I read more poems. I became a publisher and, in my 30 years of publishing, I have published many poetry books. But none has been as ambitious as this one. My idea was to make a book as rich as the one I loved so much, but to make something that was more beautiful and easier to find your way into. And I wanted, too, to make a book that helped you to pause and see the natural world around you.

Kate Wilson is publisher at Nosy Crow. I Am the Seed That Grew The Tree: A nature poem for every day of the year, illustrated by Fran Preston-Gannon and selected by Fiona Waters, is published by Nosy Crow/The National Trust, £25