Oscar: A Life by Matthew Sturgis review – A Wilde ride 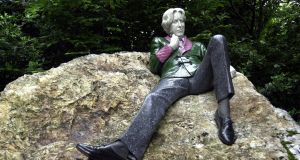 When Richard Ellmann’s Oscar Wilde, the culmination of two decades of arduous research undertaken in a pre-digital age, was published in 1987, it won the Pulitzer Prize and was hailed as “the standard life of Oscar Wilde for many years to come”. Tragically, Ellmann did not live to enjoy this acclaim. He died aged 69 of motor neuron disease, in May 1987, shortly after finishing Oscar Wilde with what documentary film-maker Seán Ó Mórdha described as “heroic persistence”. Since then a relentless fascination with Wilde has yielded new information and fresh perspectives on his sexuality, his literary influences, his chaotic finances and every other aspect of his short life.

Yet, until now, no Wildean scholar has felt ready to attempt a new “life”. In his introduction to Additions and Corrections to Richard Ellmann’s biography, Horst Schroeder, justifying his audacity in addressing Ellmann’s shortcomings, states: “On the face of it, this seems to be outrageously mean, and yet it is the highest tribute I can pay to Ellmann’s genius.”

Introducing his Oscar: A Life, Matthew Sturgis, a historian, biographer and acknowledged expert on the English Decadence of the 1890s, addresses the Ellmann in the room, as it were, by pointing out the absence from that “monumental green volume” of vital new material, including a full transcript of the libel trial of 1895, an early notebook kept by Wilde and more than 60 previously unknown letters.

Equally convincing is his decision to examine his subject not through the prism of his work, as literary critic Ellmann did, but with a historian’s perspective that will “return Wilde to his times, and to the facts”. What follows is a meticulous documenting of key events and influences that avoids imbuing them with any false sense of foreshadowed tragedy. In taking this approach, Sturgis realises his stated ambition, “to give a sense of contingency, to chart [Wilde’s] own experience of his life as he experienced it”.

With almost 900 pages at his disposal, including extensive references and notes, Sturgis has ample space to explore the importance of Wilde’s Irish childhood, adolescence and early adulthood. The significance of his mother, the towering Speranza, is handled particularly well. One lovely vignette offers us a glimpse of the three Wilde children as they lean their heads against the bulk of their unconventional mother while she reads to them from Longfellow’s The Song of Hiawatha, Poe’s The Raven and other nursery favourites.

Although Wilde was just 46 when he died, he outlived both his siblings. Sturgis provides us with a comprehensive account of the life of Oscar’s older brother, Willie, a brilliant scholar whose potential was occluded by a haze of alcohol. On leaving Portora Royal School in Enniskillen, Oscar was assured by Dr Steele, the headmaster, that, if he continued to work hard, he might be “as big a credit to the school as Willie.”

The contradictions in Wilde’s character are evident in schoolmates’ accounts of a dreamy, aloof boy who was also a born entertainer with a talent for comedy and a need for an audience. Exposing Wilde’s “defiant individualism”, Sturgis demonstrates how divisive a figure he could be from early on. A tendency to behave recklessly towards authority, consequently jeopardising his own success, is evident in his conduct as an undergraduate at the University of Oxford, where this most brilliant but vexing student exasperated dons with his persistent recalcitrance – absent at the beginning of term, nonchalant in the exam hall and unable to live within his means. “When faced with financial worries,” Sturgis explains, “extravagance was always his first resort.”

A key strength of Sturgis’s account is his acknowledgement of the importance of women in Wilde’s life. Their observances are often more astute than those offered by men who simply couldn’t comprehend this dandified upstart. May Harper remarked that Wilde, aged 20, was “already noticeable everywhere”. From the moment he arrived in London, in 1878, women became his “great allies and supporters,” although many of them turned away when he needed their support. Remedying Ellmann’s near-omission, Sturgis devotes ample space to Wilde’s formative years as editor of high-end periodical The Woman’s World. He also gives a balanced account of Wilde’s marriage, drawing on important new research, including Franny Moyle’s Constance: The Tragic and Scandalous Life of Mrs Oscar Wilde.

Wilde’s tour of America in 1882, the subject of several standalone volumes, is covered here too. More engaging is Sturgis’s vibrant depiction of Wilde in fin de siècle Paris, that “city of sex and sin”, where he drank absinthe with Decadent young poets in Le Chat Noir and shared the streets with Camille, Hugo, Degas, Verlaine and Pissarro. Returning to London, Sturgis draws on Oscar Wilde: A Vagabond with a Mission, Geoff Dibb’s impeccable account of Wilde’s lecture tours of Britain and Ireland, to chart how, after the failure of his first play, Vera, with the press on both sides of the Atlantic reporting his downfall, Wilde took to the railway, teaching himself German “with the aid of a small pocket dictionary and a volume of Heine”. He was his linguist mother’s son.

Sturgis is unflinching in his description of Wilde’s life of “sybaritic abandon” in underworld London, teeming with rent boys, blackmailers and pimps at a time when paranoia concerning sexual relationships between men prevailed. Abandoning his wife, Wilde took up with the rapaciously wanton Lord Alfred Douglas. The publication of The Picture of Dorian Gray led to “a further darkening of Wilde’s reputation”, although Sturgis tells us that its sparkling dialogue persuaded theatre manager George Alexander to commission Lady Windermere’s Fan. Success made Wilde “insufferable”. Bumping into him in Algiers in 1895, French writer André Gide, who found him “reckless, hardened and conceited”, detected “a strain of dark anxiety” beneath his joyful pose. Soon afterwards Wilde was embroiled in the “grim circus” of a libel trial, the collapse of which led to his arrest and imprisonment.

The Wilde revealed in Sturgis’s meticulous account, an individualist antagonistic towards the stifling moral strictures of his time, is evident in his writing. In a considered introduction to In Praise of Disobedience, a collection of the “boldly experimental” prose writing Wilde produced in 1891, Neil Bartlett insists that “Wilde’s challenges to the status quo of his culture were public, not private”. His work dazzles, he suggests, “with the light reflected from the barely concealed razors embedded in the honey of his language.”

Bartlett chooses one sentence from The Soul of Man Under Socialism, which opens this collection, to encapsulate Wilde’s ethos: “Disobedience, in the eyes of anyone who has read history, is man’s original virtue.”