‘I spent my time at a desk, writing. Or not writing’ 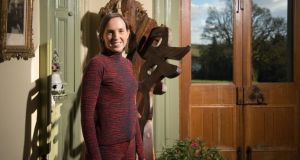 Niamh Donnelly at Annaghmakerrig: “I couldn’t write. I had been nominated as the next generation of Irish literature and I barely had the courage to lift a pen.”

Earlier this year, I found myself at a large stately home on a lake. It was the beginning of March. A few days previously, the country had been covered in snow – thick duvets of the white stuff had brought everything to a standstill – but now, miraculously, it seemed to have lifted, and all that remained were icy boulders in fields and stony mounds at the sides of roads.

“You made it here grand, in the end,” my host remarked.

“Sure it’s as if there was never any snow at all,” I replied.

I was led to my room: a large, ground-floor space with a case of intriguing old books – The Expanse of Heaven, The Loss of the Agra, The Tempest – all hardbound and dusty. On the walls were artworks by names like Norman Fraser. In the centre was a comfortable couch, and in front, a polished wooden desk, facing on to canted bay windows and a view of the grounds. This would be my workplace – the hub where I, like many others, would create my masterpiece.

In my stately home on a lake, I felt like I was in a gothic novel, but I was not. The lake was Annaghmakerrig, and the house was the Tyrone Guthrie Centre, one of the most coveted places for artists in Ireland to stay. I knew how lucky I was to be here. I had heard all the stories; how inspiration was thick in the air; how artworks bloomed from the walls and fully-formed manuscripts accrued in the crannies. The list of former guests was like a longlist for an important prize: Anne Enright, Derek Mahon, Edna O’Brien . . .

I was here as part of the Next Generation Artists’ Award, an initiative of the Arts Council to help artists at an early stage in their careers. Literature was my thing – I was supposed to be writing a novel – but there were also visual artists, architects, circus performers; our talents were multifaceted. During the residency, we would work on our craft, collaborate and learn from established artists, who would visit during the course of our stay.

Over the next few days, I met with my fellow artists. They were a fascinating group of 19 women and five men. In the evenings we ate marvellous dinners of casserole, curry, lamb shank. We discussed politics, culture, art. In the afternoons, we worked in our studios, and when we needed rejuvenation we walked around the lake, which was sometimes pink, sometimes white, sometimes a shocking, computer-screen blue. Around the grounds we encountered wildlife: hares, badgers, frogspawn. “It’s so inspiring,” we said.

The first visiting artist to arrive was Val Connor. She was radiant and insightful. She referred to me, startlingly, as “the writer”. At dinner, one evening, she turned directly towards me and asked my opinion, as if I, “the writer”, had the answer. I gave it my all. I spoke the way I had seen other writers speak, as if they knew everything there was to know.

Of course, I knew nothing. I felt clownish and stupid. I willed those encouraging faces to look away. They were the talented ones, with something to offer. I was. . .

I didn’t know what I was. With every passing moment I could feel the weight of my own failure.

The days passed and I watched the others perform their daily routines, arriving downstairs in leotards or painters’ smocks; carrying musical instruments, or professional cameras. Their projects were ambitious and exciting. I had no costume or instrument. I spent my time at a desk, writing. Or, as seemed to be the case: not writing.

I couldn’t write. I had been nominated as the next generation of Irish literature and I barely had the courage to lift a pen.

Instead, I made the mistake of googling the other Next Generation writer, Nicole Flattery. She was incredible. She had produced lots of short stories, each one better than the last. When I told her how amazing she was, she laughed. She said that writing stories was fun. Fun!

She asked about my work.

“I’m writing a novel,” I said. It felt like a lie. It wasn’t, exactly – on my desk was a 70,000-word manuscript, but I couldn’t bear to look at the thing. Still, I leaned on it, this novel I wasn’t writing. I spoke about it like it was important. I used words like “craft”, “practice”. I was certain that soon someone would send me home, having realised what a fraud I was.

I wanted to write for all the people who had helped me get this far: the teachers, the friends, the believers. Instead, I went for runs

When I found my way back to the house, I made myself sit in the library with a pen and paper. “Write anything,” I told myself. I thought I might describe the lake. It was mostly frozen over, except for a few little islands of warm water. The sky was beautifully white and textured – ripply, cottony, satiny. I could hear birds singing with joy.

Outside, some tourists were exploring the grounds. They came close to the window and peered in at me. I marvelled at the idea of me in here. I should’ve been out there, looking in.

I don’t know why I wasn’t writing. I loved writing. It would have helped me. I could have confided my worries in the page and they would have blinked up at me like the childish things they were. But I continued to not-write as though it was the answer.

One night, we went to the pub in Newbliss. We sat in a corner by the piano. Our conversation started with intellectual stuff like politics and culture, but after a few hours we were bashing out chords on that piano and singing the cheesiest songs we knew. The pints were cheap. We stayed long after closing time. Back in the house, we sat in the drawing room hiccupping and talking about whether God was real. I felt loose and free. Finally, I thought, I am a real artist, doing what real artists do.

The next morning, I woke up and hated myself. I could barely move. I regretted whatever unintellectual garb I had been spouting. I hadn’t drunk that much in years. If I couldn’t write before, I certainly couldn’t write now. What had I been thinking? I was an ungrateful person, wasting my time here.

I wasted the rest of the day sleeping. After dinner, one of the artists invited us to the dance studio to listen to a piece he had composed. We lay on the floor in darkness, and let his work, Waves, wash over us. I was touched. I knew I needed to be better.

I was touched. I knew I needed to be better

Since we were sharing work, someone invited me to share mine. I was hesitant, but a niggling part of me felt that even if my work was bad, sharing something, in the form of a reading, might at least be a positive outcome to a negative day. I shared. The others listened respectfully. After, they were kind about it, and I felt both exposed and relieved, the way art sometimes manages to make you feel – like even if it is bad, it doesn’t matter: it is necessary.

That night, when everyone had gone to bed, I sat at my desk, pen in hand. It was dark outside, but I hadn’t drawn the curtains. The light from my desk lamp illuminated my face, so that when I looked at the bay windows, all I could see was me, reflected three times, in the black of each pane. So, that made four of us, endeavouring to do this task of writing. Each time I put pen to paper, all three of them put pen to paper, too. The one on the left looked smug, as if she knew what she was doing. The one on the right looked uncertain, and the one in the middle looked fierce, as if knowing wasn’t as important as doing. And then there was me, the only one I couldn’t see, but who would keep going nonetheless. They were all counting on me.