‘Brook Water’ and ‘Jobs for the Boys, 1950s’ by John Donaghy are this month’s joint winners 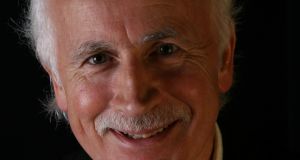 They say our souls agree their journeys
before our human lives begin
that somehow by a chance no gambler
would put money on
we move into the same arena
on some pre-appointed day.

It was summer when the bus from Derry
arrived at Pollan strand.
Willie from the Gaelic League
was chosen for his language skills
to ask for water at the only house.

Her mother at the door was all suspicion
seeing his hard hat his Sunday suit
He has the look of a Protestant on him
she said in Irish
but Brigid’s eye was bright.

No Protestant at all but it’s a Catholic I am.
Would you please let me have some water?

The girl filled his kettle from the pail
she’d lately carried from the brook across the fields
and sealed her fate.

Grandfather grandmother.
And somewhere in some disembodied state
we all lined up for the thrill
of the physical.

James Gallagher, flautist, historian, raconteur.
You lost your breath in his pauses.

Charlie Cassidy, first violin in the Opera House.
Grown men would weep at the memory of his sweetness.

Joe Crumlish taught his budgie to drink his tea from a spoon.
He loved them both.

These men I knew worked all their lives
In the dirt of the docks at Derry quay.

John Donaghy’s poetry has been published in “The Derry Journal” and in the “Sarasvati” and “Fingerpost” magazines. He was shortlisted for the Bridport Prize in 2015. He was selected to read at the John Hewitt Summer School in 2015 and is working towards a first collection.