The Wardrobe Mistress: Theatrical triumph from a master of English Gothic 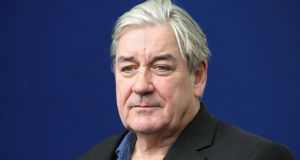 Patrick McGrath: Not since Kazuo Ishiguro’s 1989 Booker Prize-winning The Remains of the Day has this period of history been as effectively explored. Photograph: Jeremy Sutton-Hibbert/Getty Images

Joan Grice is beside herself with grief – tormented by it. Mourning is not easy for her; little is. She is a solitary individual, with no friends, “not well liked”, we are told in the opening sentences. She is good-looking, perhaps may even be beautiful, at very least striking, but for her dreadful teeth. Her disciplined existence has been unravelled by loss, the sudden death of her legendary actor husband, “Gricey”. What a character, beloved by all; he was flamboyance personified, the life and soul of every gathering.

Master storyteller, Londoner Patrick McGrath immediately sets an emphatic stamp on his characteristically menacing 10th novel with unsettling ease, aided by his limpid prose, languid feel for description and, most tellingly, if sporadically, by a waspish chorus of dead onlookers.

Few contemporary British writers are as adroit at summoning atmosphere, while the tone in this queasily seductive, bravura narrative is nothing less than inspired. Joan, hardworking and stern, a wardrobe mistress who knows her craft to the set of a collar, the length of a sleeve, may have had the man everyone wanted, but with it came the envy and also, as she discovers, the burden of his deception.

It all takes place in a dreary postwar London. It is 1947 and debris from the Blitz in the form of ruined buildings and rubble are still visible, “soot everywhere”. Of course it is cold and damp; it is January and, what with rationing and gallows humour, what better world to inhabit than theatre-land with its grasp of human absurdity.

Everyday life may not be up to much, but actors can retreat into an alternative universe and concentrate on competing for parts. It is not like that for Joan, although Vera, her beautiful adult daughter by Gricey, is also an actor. Like father like daughter, Vera is larger than life – “Like her mother, Vera Grice at this time was far from stable or tranquil or clear in her mind about anything, but she did have her work” – and is, most obviously, unpredictable, possibly dangerous. Ruthless and sardonic, she is one of the most memorable characters yet created by McGrath. In a literary career begun with Blood and Water and Other Tales, swiftly followed by The Grotesque and Spider, he has populated his fiction with many originals. McGrath’s handling of English Gothic won him an audience while beneath the ingenious special effects is his intuitive understanding of human nature at its most flawed and, in many cases, as with lonely, haunted Joan Grice, at its most vulnerable.

The widow’s needs dominate a novel which is rich and busy with subplots, including the racist cruelty of Oswald Mosley’s British Fascist movement as perpetrated by some sorry remnants still clinging to their black shirts and delusions. Not since Kazuo Ishiguro’s 1989 Booker Prize-winning The Remains of the Day has this period of history been as effectively explored. It also makes The Wardrobe Mistress most shockingly a novel of the moment, reflecting the recent antics of white supremacists in the United States. Joan wanders unwittingly into an underworld which is particularly repellent to her as a Jewish woman and personally devastating as it destroys the love which she has felt to be her life’s achievement.

This historical subplot is brilliantly juxtaposed with the murky intrigue surrounding an upcoming production of John Webster’s macabre Jacobean bloodbath, The Duchess of Malfi. McGrath, on dazzling form, takes the reader through the rehearsal from first reading to the run itself, complete with backstage backstabbings. Edgy Vera flourishes as an actor preparing to mould a role – in this case, that of the spirited duchess. Even more interesting, though, are the struggles of a young actor, Frank Stone, an ambitious immigrant caught up in an endless cycle of self-invention and lies.

By chance he finds himself stepping into Gricey’s vast shoes when the great man’s abrupt demise enables him to take over the famous actor’s signature portrayal of Malvolio in Shakespeare’s Twelfth Night. The understudy’s uncanny performance impresses all involved, including Joan, who feels her dead husband’s spirit has returned. She decides to help the youth and even uses her skill with a needle to alter Grice’s clothes to fit the young actor’s poverty-ravaged form. As expected, the tentative pair becomes close but McGrath shapes a memorable love story ignited by contrasting desires: “. . . she ran her fingers through his thick hair and gazed out the window, thinking, he’ll fall in love with someone else, that’s what’ll happen next. Someone who can do more for him than I can . . . So something between them died a little that night.”

All the while, though, the chorus, as effective as that employed by Jeffrey Eugenides in The Virgin Suicides – only far less rueful, more knowing, almost maliciously gleeful – sustains a dark undercurrent. The Wardrobe Mistress is theatrical in intent, structure and execution, as well as very English. It is as if McGrath, always a fascinating writer, has aspired towards an ironic form of ghostly noir which also includes echoes of famous plays through asides, references and incidental gestures.

While the actors are busily shaping their production, under the watchful glare of a sharp-tongued female director, an equally bloody, real-life play is gathering momentum off stage. As the narrative approaches its end, Joan has become a tragic heroine, one possessed of a mounting sense of theatre. She finally locates her husband’s uniform, as much a costume as any he ever wore on stage: “She’d lifted out the folded shirt and breeches, the belt, the boots and cap, carried them from the kitchen and into his bedroom . . . They were all of a piece. The sum of his parts.” The ambivalence of the word “parts” here resonates throughout the entire narrative.

It is a cohesive novel, fast-moving and quick-witted, a piece of theatre. Yet where Patrick McGrath most succeeds, in what is one of his finest novels to date, is, as always, in his study of character and, most plaintively, how the human mind at its most vulnerable ultimately falters in the face of the hopes and longing when confronted by the sheer pain of disappointment.