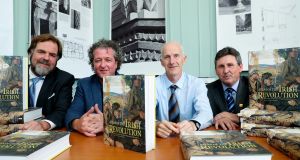 As weighty tomes go, they do not get much weightier than the newly published Atlas of the Irish Revolution.

This monumental work of almost 1,000 pages published by Cork University Press weighs over 5kg or just under the old imperial stone.

It contains 364 original maps and 707 images, many of which have never been seen before.

It is the work of a group of academics in University College Cork (UCC) and has taken five years to come to fruition.

Cartographer Mike Murphy said the most challenging map was the one which listed the locations of all 1,900 IRA companies active in the War of Independence.

Many of the traditional maps outlining ambushes during the revolutionary period were found to be wrong and had to redrawn.

There is even a map of the locations for sphagnum moss around the country. The moss was used to treat wounds in the days before antibiotics.

The Atlas of the Irish Revolution will be in every public library in the country. It should be in every gym as well. pic.twitter.com/tvcPdNxsUO

Speaking at the launch in Dublin, broadcaster and historian John Bowman noted that every public library in the country will have a copy, but he joked that it is not a book that will be lent out because it will take much longer than the usual lending period of two weeks to read.

Mr Bowman said the use of maps and illustrations were “absolutely brilliant” in making the book accessible to a wider audience.

He hopes that the book will be an inspiration in 20 years for young historians who will attribute their interest in history to the Atlas of the Irish Revolution.

He also suggested its retail price of €59 is very reasonable and represented great value for a book of its size.

“It is among the least expensive books on Irish history. The cost per page is very inexpensive,” he said.

It has taken as its template, the Atlas of the Great Irish Famine which was published in 2012 and was a success.

The Atlas of the Irish Revolution’s main focus is the decade of centenary from 1912 to 1923, but also features sections on the roots of the revolution in the 19th century; the impacts, outcomes and legacies of these turbulent years; and how they have been remembered in literature, on film, in art and through public memorials.

Associate editor Dr John Borgonovo, an historian at UCC, said their ambition was to produce one of the definitive works of the decade of centenaries. “It’s the most important thing I have been involved in,” he said.

It includes 140 separate contributions from scholars of the era along with hundreds of maps, photographs and illustrations.

“It’s been a long time in the making, but when you see it in the flesh the images jump off the page,” he said.

“The idea of the book is to make the scholarship accessible. It’s a very visual book. That’s part of its appeal. There are many entry points for people to engage with the historical material.

“It tries to capture a very exciting period in not just Irish history, but global history. We wanted to bring out the international connections. Ireland is not acting by itself, but is part of something much larger. It is impacting events not just nationally and provincially but down at the parish level.”

The book will also be launched in Cork on September 19th.