How the fight against ‘poverty and squalidness’ created the welfare state 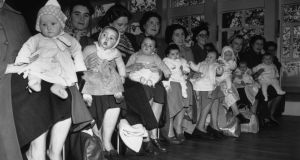 The Woodberry Down Health Centre in Stoke Newington, London, opens for treatment. Woodberry Down was the first fully comprehensive health centre to be built under the National Health Service Act. Photograph: L Blandford/Getty Images

Book Title:
Bread for All, The Origins of the Welfare State

The first substantive initiative to create a welfare state occurred in the first two decades of the 20th century, just before Irish independence. A minimum wage was introduced in 1909 for many industries and was applied to farm workers from 1920. In 1906 local authorities provided free school meals. Two years later a children’s charter was introduced providing extensive protection for children, and the old age pension arrived. Soon after unemployment assistance was made available.

On April 29th, 1909, the then chancellor of the exchequer, Lloyd George, unveiled to the House of Commons, in a four-hour speech, what he described as “a war budget…For raising money to wage implacable warfare against poverty and squalidness”.

Incidentally, the Irish Parliamentary Party, led by John Redmond, opposed that 1909 Lloyd George budget because it would impact adversely on the Irish drinks industry.

In 1911 the National Insurance Act was passed, which provided free medical treatment and sick pay for 20 weeks for a contribution of 10 shillings a week.

In the aftermath of Irish independence, several pieces of legislation were passed at Westminster, which resulted in the building of over half a million homes – a belated fulfilment of the promise of “homes for heroes”, the heroes of the first World War. There were improvements in pensions and unemployment benefits.

The seminal development came in 1942 with the publication of the Beveridge report. It identified five “giant evils” in society: squalor, ignorance, want, idleness and disease. It recommended a compulsory insurance scheme involving healthcare, unemployment and retirement benefits. The Labour Party, led by Clement Attlee, which came into office immediately after the war in 1945, acted on the Beveridge recommendations, going beyond them to institute the National Health Service (NHS).

What was astonishing about that British Labour Party initiative was that it came at a time of great economic stringency and when the national debt had escalated alarmingly during the war years. But not only that, none of the salient features were disturbed by the Tory governments returned to office from 1951 to 1964. It was because the welfare state had become embedded in the national consciousness, had become the prevailing “common sense”, that is, until Margaret Thatcher assaulted that “common sense” when she took office from 1979.

Bread for All engagingly traces the trajectory of “common-sense” – ie the prevailing mindset – from the early 19th century and that led to the welfare state.

In the 15th century impoverishment was criminalised – beggars were punished, often brutally – the belief being that poverty was self-induced. In 1597 and again in 1601, during the Elizabethan era, legislation was passed providing for poor relief, which made each parish responsible for providing such relief.

In 1832 a Royal Commission on the Poor Law was established. It identified three central principles: there should always be an incentive for people to choose work over relief; poor relief could be dispensed only in workhouses; and there should be a central board to ensure uniformity.

Workhouses were deliberately constructed to be so bleak so as to be a deterrence. Families were to be broken up, barely adequate meals were provided, food poisoning was common and the workhouses were overseen by a master “who liberally dispensed beatings or spells in solitary conferment to those accused of misdemeanours”.

But during the 19th century the prevailing mindset began to shift.

Surveys done on the scale of poverty astonished many – up to 30 per cent of the population barely survived at subsistence levels. The French Revolution gave rise to apprehensions that an impoverished populace might rise in rebellion and with extensions of the franchise it was appreciated a new force would emerge – as it did in the form of the Labour Party – that would challenge the parliamentary hegemony of the Tories and Whigs. It also began to be appreciated that poverty was influenced by factors other than indolence; notably structural changes in society and the economy which made it impossible for the mass of impoverished people to emerge from their destitution by their own efforts and which, in many instances, deepened their impoverishment.

That shift in mindsets enabled the emergence of the welfare state.

This book ably chronicles the intellectual influences that changed these mindsets and the social forces that required that.

Irish mindsets were not ready to shift, as indicated by the opposition of Irish parliamentarians to the Lloyd George 1909 budget.But it was not just them.

In a letter to Austin Stack, minister for home affairs in the First Dáil, in May 1921, WT Cosgrave, minister for local government and one of the revered founders of the Irish State, wrote on the subject of orphans in workhouses: “As you are aware, people reared in workhouses are no great acquisition to human society. As a rule, their highest aim is to live at the expense of the ratepayers. As a consequence, it would be a decided gain if they took it into their heads to emigrate. When abroad they are thrown onto their own responsibilities and have to work whether they like it or not”.

When the Beveridge report was published in 1942 in Britain, Eamon de Valera’s cabinet apparently gave it brief consideration and established a cabinet committee to examine whether a separate department of social services should be set up. It seems, the cabinet committee never met.

Garret FitzGerald used to argue that had it not been for the insurrection of 1916, Irish freedom would not have happened until decades later because of the reliefs the emerging welfare state brought to the mass of impoverished people. But what was the point of “Irish freedom”? Freedom from what and freedom for whom? Was freedom from want not an essential human need and given the mindset of the leaders of the new Irish State wasn’t it likely the mass of Irish people would have been better off without “Irish freedom”?

Vincent Browne, is a journalist and former TV presenter