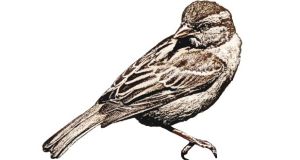 When my brother was seven, he shot a bird with a slingshot. He shot it mindlessly, while we wandered, aimless, through the woods that we could get through from our back garden.

He had got it for his birthday, from our dad. Dad had got me one too, for my birthday a few months prior. But I had stored it away in the back of my sock drawer, because just holding it had stirred a hollow feeling in my stomach.

My brother had taken it with greedy eyes and brought it with him when we were sent out to play. I had watched it worriedly as he talked about the birthday party he’d be having in the afternoon, and tried to listen as he talked about how sure he was that Grandma would be getting him a bike.

I eventually felt calm settle inside me as my mind drifted from the slingshot. We sat down on the forest floor, and I talked to my brother about my friend Mandy in school, and how Richie had a girlfriend, and how Ollie would be turning 12 in September.

But I didn’t realise for a while that he wasn’t listening, that he was eyeing up a bird as it hopped from branch to branch.

It was a young and healthy sparrow. When I did notice he was watching it, I stopped talking, and we simply sat and stared at it for a while.

I didn’t notice him put the stone in the slingshot, but I did see it flying through the air, and I did see the bird hit the leaf-covered ground with a hollow and horrible thump.

We brought it back to the house and hid it from our mother. We brought it to our room and put it in a cardboard shoebox. We hastily promised it we’d be back after the party. We washed the blood off our hands in the bathroom.

We kept it under my bed, going to bed each night with dread-filled lungs, hoping it would be alive in the morning, and not knowing what we’d do if it wasn’t.

I told my brother that we could, under no condition, tell our dad about it. He asked why, and I didn’t tell him. All I knew was that my dad would probably congratulate my brother on his “first catch”. He’d probably order me to finish it off. He’d scold me if I refused. “Don’t be stupid, Roo, you’re a man,” he’d bark, and I’d choke down my tears. “I didn’t raise a girl.”

My brother and I would take turns going to fetch worms in the morning, and we’d feed them to it. We’d give it little tubs of water and feed it sunflower seeds or fruit that we’d sometimes steal from the kitchen, as a treat.

My brother never told me, but I could practically see the guilt wash over him every time he laid eyes on the little bird. It wasn’t as bad as the moment he had realised what he’d done, out in the woods. The moment he froze in horror and dropped the slingshot, the same second that the bird hit the forest floor.

I had rushed over first, and my brother had followed seconds after. We had stared in pure horror at its wing – where the stone had hit it. So much blood for a little sparrow.

He never told me anything about how he felt about it. We didn’t even make eye contact for days.

A week passed. The bird was still alive.

“We should set it free, Roo,” my brother suggested, as we both sat together on the floor of our bedroom, watching as the bird drank its water. “It’s not bleeding anymore. You can barely tell that it was hit in the first place. Birds don’t belong in bedrooms. We should let it fly away by the river.”

It took me a second to agree. I could feel doubt crawling up my throat as I watched my brother carry the shoebox to the stream. But it disappeared once we reached the riverside. The water was calm, but icy cold to touch. We crouched by it, in the twigs and the dying leaves on the forest floor.

He opened the shoebox and tipped it forward. We watched excitedly as the bird stumbled out. “Fly away!” my brother crowed, his eyes lit up. “You can go now, fly away!”

I joined in. “Yeah, go fly away birdie, you’re free!” I cheered.

We chanted and whooped as the bird took to the air. But stopped dead as it hit the brick wall on the other side.

We left the shoebox by the riverside. We walked back home in silence. I could still hear the sound of my heartbeat grinding to an empty halt as the sparrow dropped into the water. A heart-stopping sense of guilt and horror had filled my lungs and didn’t drain for months. My brother hardly used the bike his grandma had bought him. I didn’t touch my dinner for days.

We didn’t talk about the bird again.