Break.up by Joanna Walsh review: intimacy in the digital age

Structured like a travelogue, this novel moves around European cities as the narrator laments a lost love 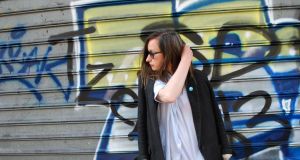 Imagine you’ve just enjoyed a brief romantic dalliance. It lasted barely a week and then fizzled out, unconsummated. Supposing you were to fret over it to the tune of some 250 pages: would that make you an old-fashioned romantic or a deluded weirdo? What if that handful of days had been bookended by protracted online correspondence – would that legitimise your woe? The narrator-protagonist of Joanna Walsh’s new novel is in just such a quandary. When she laments her lost love, it is not for his touch or his smell that she pines but the dynamic of their on-screen communication: “I liked the rhythm of our written conversations, the ellipses, phrases left hanging, finished, or left to go hang; each sentence a switchback, every new word, a change of angle”.

“Stalking’s the aesthetic of our generation,” she declares, wryly acknowledging the folly of her obsession while passing the buck to the zeitgeist.

Break.up is structured like a travelogue. It begins with its narrator taking the Channel tunnel from London to Paris; the chapters move through a European tour encompassing Italy, Greece and Eastern Europe before winding homeward via Berlin, Brussels and Amsterdam. It soon becomes apparent that the memories of her failed marriage loom every bit as large as those of the abortive romance, whereupon her predicament begins to make more sense: infatuations are often more about what the person is away from than about the object of affection per se. We might think of a life lived online as an attenuated existence, but for Walsh’s narrator it is quite the opposite: “I can’t begin to describe the silence at the heart of marriage… No wonder I preferred romance, the internet, correspondence, the airless Twitter in which people have no husbands, wives, families”.

Walsh is an exponent of the genre of writing known as creative non-fiction or autofiction, in which elements of memoir are spliced with essayistic digressions within the garb of a novel. Her protagonist’s internal monologues frequently nod to familiar touchstones of philosophy, sociology and psychoanalysis. A vignette on the strangeness of airports (“a buffer zone against loss of time and place”) recalls the work of the French anthropologist Marc Augé, whose Non-Places (1995) dissected the uncanny loneliness of transient spaces like airports, motorways and hotels – a theme Walsh explored in her 2015 book, Hotel. A passage in which the protagonist ponders the distance between artifice and reality in visual culture both high and low – juxtaposing Matisse paintings with bikini-clad women in billboards – evokes John Berger’s art historical treatise, Ways of Seeing (1972).

Revisiting the online footprint of a dead relationship can be a singularly jarring and dispiriting experience. Towards the end of the book, the narrator addresses her absent lover: “I’ve spent too long alone with you – or with your shell: your messages, your photographs, your music.” But Break.up isn’t just a meditation on the nature of intimacy in the digital age; it’s also about the peculiar limbo of starting afresh, alone and untethered, after a long stretch. If a good deal of the narrator’s people-watching centres on young couples, it is as much on account of their youthfulness as their romantic bliss. Trawling her memories of her own youth, she finds them sadly lacking in specificity: “I can remember the feeling of it, but nothing that I said”.

Though by no means a doorstop, Break.up is somewhat longer than Walsh’s previous works such as the novella Vertigo (2016) and the short story collection Worlds from the Word’s End (2017). Her whimsical laconicism and stop-start syntax, so well suited to short-form writing, threaten to become unwieldy at regular book length. Luckily her protagonist’s insatiable restlessness helps offset the torpor of her wallowing. No sooner does she settle into a new place than it becomes over-familiar and she has the itch to move on. “The ideal holiday,” she remarks, “would be constant arrival and departure; as it is I’m bored by day three…’

Foreign tourism is said to be salutary for people in a state of emotional flux, because putting yourself in unfamiliar surroundings can sharpen your sense of who you really are. Perhaps this is also true, to some extent, of literary influences. For all the Francophilia on display in Break.up – from the precise minimalism of the prose, evocative of the nouveau roman, to the name-checking of writers like Roland Barthes and André Breton – Walsh’s itinerant narrator exudes an unmistakably English reserve as she muses over biscuits, cigarette packet health warnings, and the telling little banalities of cultural difference. She, like her creator, is decidedly and inescapably an Englishwoman abroad.