The Order of Time review: Where physics and philosophy meet 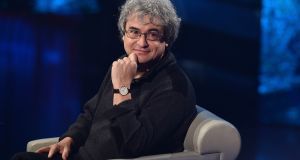 Carlo Rovelli points out that our entire conception of reality is blurred, necessarily – we can only discern the big events, not the infinitesimally small. Photograph: Stefania D’Alessandro/Getty Images

Book Title:
The Order of Time

We live in the past. When we look deep into the night sky the radiance of the stars we see is anything from minutes to millions of years old: we are stargazing into the past. Even here on earth the “present moment” is an illusion. The light that for me is the image of your face takes an interval of time, however brief, to reach the retina of my eye, so that for me the you I see is you as you were an instant ago. It is a dizzying thought. Carlo Rovelli has many such facts and phenomena to confront us with, that require us to bethink ourselves. As he remarks, “We know little of the actual relation between what we see of the world and the world itself.”

Rovelli is a physicist working in the field of quantum gravity – “There is not yet a theory of quantum gravity that has been generally accepted by the scientific community, or obtained experimental support” – and is based in Marseilles, where he directs a research group at the Centre de physique théorique. He is also a masterly interpreter to the layman of highly complex and counter-intuitive current theories of the actual nature of reality, that reality to which most of us outside the laboratory are purblind. As the title of Rovelli’s previous book has it, Reality Is Not What It Seems. But have no fear: he is a wonderfully humane, gentle and witty guide through the theoretical thickets, for he is as much philosopher and poet as he is a scientist.

Perhaps the easiest means of access to this captivating, fascinating, profoundly beautiful but undeniably intricate book is to consider, as Rovelli does in Chapter 4, the contrast between Aristotle’s and Isaac Newton’s notions of what time is. For Aristotle, philosopher of the actual, time is nothing more or less than the measurement of change: “If nothing changes, there is no time.” Newton, on the other hand, founded his physics on the premise that there is such a thing as absolute time – and absolute space, too, but that is another matter – which passes in a seemingly Platonic somewhere, “independently of things and of their changes”.

We live in a Newtonian universe, as we must. Newton, it might be said, made a home for us, accommodating, dependable, built to our scale, and there we reside, and always shall. There is, however, not next door but on the very same site as our House of the World, another structure, wherein other laws hold sway, and another reality is in place. Here the medium in which things exist is Einstein’s spacetime. “This is the synthesis that Einstein found between Aristotle’s conception of time and Newton’s,” Rovelli tells us. “With a tremendous beat of his wing, Einstein understands that Aristotle and Newton are both right.” However, Newton is mistaken in holding that time is absolute and independent of things, “that it passes regularly, imperturbably, separately, from everything else”.

In fact, time varies according to where we are and at what speed we are moving. The time that the clock on the mantelpiece measures is faster, admittedly by an almost unimaginably tiny fraction, than time down on the hearth. Also, for a runner in a race, time passes more slowly than for his friend standing by the track and cheering him on. The reason for these eerie effects is that time slows down in proximity to a mass – the hearth is closer to the earth than is the mantelpiece – and with increase in velocity. This is one of the principles of the Theory of Relativity, and one of the implications of it is that, as Rovelli baldly states in a section heading, “‘Now’” means mothing”.

The collapse of the notion of “the present” Rovelli considers to be “the most astounding conclusion arrived at in the whole of contemporary physics”.

Among the many amazing and, to most of us, baffling aspects of the quantum world – the world, that is, of atomic and sub-atomic particles – is that down there, in the mysterious microcosm, there is no distinction between past and future: time’s arrow can fly in either direction, and does. How, on earth, can this be? Yes, we live in a Newtonian universe, but that universe is composed of quantum particles. The chair in which you are sitting, and which seems to you a solid entity, is in fact a mass of swarming molecules, a kind of reified blur. And for those particles, “then”, “now” and “next” are all the one.

Indeed, Rovelli points out that our entire conception of reality is blurred, necessarily – we can only discern the big events, not the infinitesimally small – and that this blurring effect offers a kind of mediation between the counter-intuitive quantum world and the Newtonian world in which we live. Locating that median point, where two apparently irreconcilable versions of reality converge, is one of the most ticklish problems with which modern science has to grapple. How can a cloud of probabilities, which is what atomic particles are, coalesce into our big, solid, enduring world? And more to the point, where precisely can we locate the horizon of that coalescence?

On every page of this book Rovelli expresses, in a prose style at once simple, clear and passionate – and, one must add, exquisitely translated – his wonderment at the essential strangeness of things, but if his head is frequently in the clouds, his feet remain firmly on the ground. He is the quintessence of common sense. He quotes Bertrand Russell’s famously witty comment on the fact that in modern physics one does not speak of “causes” – “The law of causality . . . is a relic of a past age that survives, like the monarchy, only because it is assumed, wrongly, that it does no harm” – but acknowledges the exaggeration. “At an elementary level there are no cats either,” he writes, “but we do not for this reason cease to bother with cats”.

In the world according to Rovelli, entropy is the prime mover. And what is entropy? It is the process expressed in the second law of thermodynamics, which, put at its simplest, as Rovelli does, decrees that ‘if nothing else around it changes, heat cannot pass from a cold body to a hot one’. The concept seems to us simple and self-evident. It is the reason that engines work-heat becomes energy-and that the universe grows steadily more disordered, which it has been doing since the Big Bang. And according to Rovelli, it is “the only basic law of physics that distinguishes the past from the future”. In other words, without entropy, without the process of ceaseless disordering, there would be no time.

In Carlo Rovelli modern physics has indeed found its poet. However, he writes not only about Yeats’s “beautiful lofty things”, but also about the quotidian world where we all, scientists and sewerage workers, postmen and poets, lead our brief, humdrum and sometimes exalted lives. Of the frequently baffling matters he offers to our attention – and this review has touched on only a few of them – most could be expressed with perfect simplicity in mathematical equations; it is our great good fortune that Rovelli, and a few others of his kind, whom it is an injustice to call “popularisers”, persist in the effort to translate from the technical language of science into the vernacular, so that we may all have a glimpse of the timeless world of particle physics, “a clear world, windswept and full of beauty as the crests of mountains; aridly beautiful as the cracked lips of the adolescent you loved”.