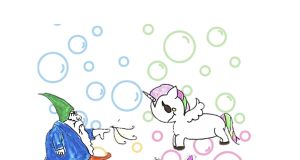 Sparkles was a unicorn. He was in a lovely forest, called the Meatball Forest, with Diamond the baby rabbit.

Sparkles was watching Diamond’s dreams. Sparkles couldn’t do magic and he wanted to be a Dream Watcher.

He wanted to become a Dream Watcher so that he could watch all the happy dreams that people were having so he could have a better job.

Right now, his job is that he cleans the house for his mum and gets paid in diamonds. It’s boring and he has to do the same thing every day. He wants to experience a change every day, and dreams are different every day.

In the lovely forest, it wasn’t all candy-canes and sweets and candy. There was a scary wizard named Scribbles.

He shouted a magic word:

A very big bubble appeared and it took Sparkles’ mum. Sparkles got really mad. He made a plan to save his mum.

“Diamond the Wizard said a magic spell and then a very big bubble appeared and took my mum. So I decided to help.”

“Okay Sparkles, I will help you save your mum because it will be terrible if we do not,” said Diamond.

“Should we ask my mum to help because we could get lost going to the wizard’s castle?”

“Of course, it will be good of her to help us,” said Sparkles.

“I will tell her and I will be back in a second,” shouted Diamond.

After a while, Diamond came back with her mum.

They lived happily ever after!