A history of theatre in 30 quotations: ‘Acting’s just waiting for the custard pie’ 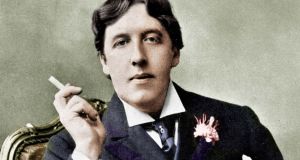 Oscar Wilde: The play was a great success, but the audience was a total failure. Photograph: Roger Viollet Collection/Getty Images

If you can’t write a play without being taught – don’t.
George Bernard Shaw

Writing a play is like smashing that [glass] ashtray, filming it in slow motion, and then running the film in reverse so that the fragments of rubble seem to fly together. You start – or at least I start – with the rubble.
Tom Stoppard, quoted in Kenneth Tynan’s Show People

I suspect that Beckett is a confidence trick perpetuated on the twentieth century by a theatre-hating God. He remains the only playwright in my experience capable of making forty minutes seem like an eternity and the wrong kind of eternity at that.
Sheridan Morley on Samuel Beckett, Punch

If somebody asked me to put in a sentence what acting was, I should say that action was the art of persuasion.
Laurence Olivier, quoted in Kenneth Tynan’s Curtains, 1961

I love acting. It is so much more than real life.
Oscar Wilde, The Picture of Dorian Gray, 1891

The better the actor, the more stupid he is.
Truman Capote

Show me a great actor, and I’ll show you a lousy husband.
WC Fields

Anyone who works is a fool. I don’t work – I merely inflict myself on the public.
Robert Morley

I always pass on good advice. It is the only thing to do with it.
Oscar Wilde, An Ideal Husband, 1899

There are no small parts, only small actors.
Constantin Stanislavski

The play was a great success, but the audience was a total failure.
Oscar Wilde

Broadway – a branch of the narcotics world run by actors.
Bertolt Brecht

Nobody ever died of laughter.
Max Beerbohm

Humour is like a frog: dissect it, and it dies.
Mark Twain

You may be as vicious about me as you please. You will only do me justice.
Richard Burton, New York Times, July 25th, 1978

A critic is a legless man who teaches running.
Channing Pollock

Ducking for apples – change a letter and it’s the story of my life.
Dorothy Parker

All the things I really like to do are either immoral, illegal or fattening.
Alexander Woollcott

Don’t come too close, you’ll see through my talent.
Ralph Richardson, attributed: to the lighting cameraman on the set of The Charge of the Light Brigade

I am dying as I have lived – beyond my means.
Oscar Wilde

Never invest your money in anything that eats or needs repairing.
Billy Rose

Life begets life. Energy creates energy. It is by spending oneself that one becomes rich.
Sarah Bernhardt

When we are born we cry that
we are come
To this great stage of fools.
William Shakespeare

I don’t think any writer has much purpose back of him unless he feels bitterly the iniquities of the society he lives in.
Tennessee Williams

A play should give you something to think about. When I see a play, and I understand it for the first time, then I know it can’t be much good.
TS Eliot, New York Post, 1963

Whoever condemns the theatre is an enemy to his country.
Voltaire

From Break A Leg! A Dictionary of Theatrical Quotations, compiled by Michèle Brown and introduced by Gyles Brandreth (Notting Hill Editions, £9.99)