Once famous but largely forgotten, his work is a fascinating visual expression of nationhood 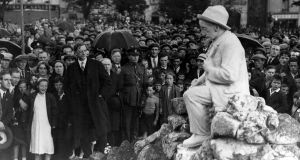 My interest in the sculptor Albert Power goes back to my childhood in the 1950s when on a visit to the National Gallery of Ireland with my father, I was intrigued by Power’s Leenane, Connemara Trout. What looked initially like a lump of green stone, excitingly revealed itself to be salmon swimming upstream.

On a visit to Connemara shortly after, I was introduced to his delightful Padraic Ó Conaire statue, then in Eyre Square, Galway. Lacking the usual hauteur of memorials to great men, Ó Conaire seemed to welcome children as well as adults into his space.

Not surprisingly, when I later studied art history as a mature student, I chose this accessible artist, once famous but largely forgotten, as my subject for postgraduate study. My years as curator of Irish art at the National Gallery of Ireland, with its large collection of his work, led me to an even greater appreciation of him.

The initial research was completed for the thesis between 1988 and 1992. This in turn provided a solid body of knowledge from which to begin writing the book, the first biography of this sculptor who lived from 1881 until 1945. Born in Victorian Dublin, his career spanned two world wars, the Easter Rising, the War of Independence, the birth of the Irish Free State followed by a short but bitter Civil War.

But his life did not only coincide with seismic political events. The cultural landscape gradually changed too. Academic realism dominated the Irish art scene from the end of the 19th century and beyond. Power was a superb exponent of this style. But by the time of the sculptor’s death, modernism and modern art had begun to make an impact, albeit in a country renowned for its conservative art tastes.

Two issues intrigued me when first researching the artist for the thesis. Writing a detailed biography of his life and times several decades later with access to more material allowed me the opportunity to explore these topics in greater depth. Firstly, critical assessments of Power written before his death accorded him an honoured place in the history of sculpture. In their minds Power was the great nationalist sculptor of the Irish Free State. Obituary columns were united in their praise of his work, some of it distinctive in its “Irish” content and medium like the Connemara Trout.

Yet within a few short years the artist had been almost forgotten and art historical publications up until this century rarely mentioned him. Why so?

The sculptor had trained at the Dublin Metropolitan School of Art under the guidance of luminaries Oliver Sheppard (his Cúchulainn statue graces the window of the General Post Office, O’Connell Street, Dublin) and academic portrait painter, William Orpen. Both teachers were inspirational for the young Power. By 1919, on being elected to full membership of the Royal Hibernian Academy, the influential Builder magazine declared he was one of the most promising of Irish sculptors and that his work was marked by artistic skill and originality.

A man of strong nationalist views, Power believed that where possible his art should be as distinctively Irish as possible. To this end he used Irish stone of all colours and hues rather than cheaper imported marbles. His Connemara Trout is a superb example of this idea. Unfortunately for him in the decades after his death, his realistic style quickly became unfashionable. It would be the next generation of Irish sculptors like Seamus Murphy and Oisín Kelly who would go beyond verisimilitude and towards abstraction. Unlike Power they were interested in exploring modernist styles.

Importantly too, following the second World War, the social and cultural landscape transformed. Ireland underwent a period of rapid economic change which in turn had a positive bearing on the arts. The Arts Council was established in 1951. It promoted art outside Ireland and the ROSC exhibitions (1967-88) marked the internationalisation of the Irish art world. By the end of the century an Irish Museum of Modern Art had been opened to the public.

I was also fascinated by the intersection between art and politics during his lifetime. The sculptor was commissioned by all sides of the political divide to produce memorial portraits and monuments. The Cumann na nGaedheal party quickly set in train busts of Arthur Griffith and Michael Collins and plaques for the new cenotaph at Leinster House, erected in 1923. When Fianna Fáil followed into government in 1932, it too quickly ordered portraits of its chosen martyrs, Cathal Brugha and Austin Stack.

But also anxious to create their own pantheon of heroes, anti-Treaty republicans relied on Power to fashion monuments to their dead; among them 1916 leader Sean Mac Diarmada and the republican Liam Lynch who was shot by state troops during the Civil War. The sculptor’s unambiguously figurative style proved to be acceptable to all political groups because, like the bulk of the citizenry, there was a general distrust of modern art. Power’s realistic imaging was regarded as the most appropriate in visualising the new State.

While there were few opportunities to demonstrate artistic individuality in the many religious commissions that came his way, there were several occasions when the artist produced statues carved from native limestone and granite and whose physiognomy was deliberately gaelicised. His Madonna and Christ Child at All Hallows College, Drumcondra, Dublin (1922) is especially impressive. Using limestone from Durrow, he used his wife with her distinctive Irish features and one of his children as models for the work. The Madonna was represented wearing a Munster cloak.

A later St Joseph and Christ Child group for Garbally College, Galway, characterised both figures as sturdy Irish rural types. Interestingly one of the cornerstones of national identity was its devotion to Roman Catholicism. Power’s “Irish” religious representations consciously linked the piety of the Catholic Free State with the fervour of Ireland’s early Christian era.

My biography, dedicated to Power’s contribution to Irish art explores his sculpture both at the time of its production and the present day. It is framed within political and cultural life before and after independence. I believe that his work represents a fascinating visual expression of nationhood in bronze and stone.
Expressions of Nationhood: Albert G Power, RHA by Dr Síghle Bhreathnach-Lynch is published by Irish Academic Press