The Other Name: Hypnotic repetition – and no full stops

Book Review: Jon Fosse’s novel is the first two parts of a larger work, Septology, that will be published in three volumes 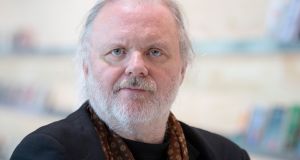 John Fosse: regarded as a national treasure in Norway

Who stole all the full stops from last year’s novels? The deserved Booker Prize winner Girl, Woman, Other by Bernardine Evaristo had only one full stop per chapter. Lucy Ellmann’s much-praised Ducks, Newburyport had just one in the narrator’s entire thousand-page monologue. Now Jon Fosse has gone one better – or worse – by having none at all in his new novel.

Fosse isn’t much known in the English speaking world, but he’s a big name in his native Norway, where his national treasure status is such that he’s been awarded a residence within the grounds of the Royal Palace in Oslo. He once taught a literary workshop where one of the students was Karl Ove Knausgaard, where Knausgaard submitted a poem and, as he describes it in his book Some Rain Must Fall, Fosse told him: “The first line is a cliche, you can cross that out. The second line is also a cliche. And the third and the fourth. The sole value of this poem, he said after rejecting every single line, is the word ‘widescreen-sky’… You can keep that. The rest you can scrub.”

So he has high standards for others, but what of his own work? The Other Name is, as the subtitle suggests, the first two parts of a larger work, Septology, that will be published in three volumes.

Fosse’s book, translated by Damion Searls, is of a particular and recognisable type of European literature. The prose is closely packed and repetitive, with no paragraph breaks except when characters speak. The action is internal: everything that happens in the book happens in the narrator’s head. Which is fine, because what is a book but an effort, with no moving parts, to make things happen inside a reader’s head?

The narrator is a middle-aged man, an artist named Asle, who paints in order to “try to paint away these pictures that are lodged inside me, there’s nothing to do but paint them away, one by one,” though he is never sure when a painting is finished, and when “the picture will disappear and go away and the uneasiness inside me will stop and it’ll bring me peace”.

Asle lives alone following the death of his wife, Ales, and has few contacts other than a gallery owner and a neighbour called Åsleik. If these names are starting to sound quite similar, then brace yourself, because central to the book is another Asle – the “other name” of the title – who lives in a nearby town, and is also a painter.

I’ve never tried to write in a complicated way. I always try to write as simply and, I hope, as deeply as I possibly can

The other Asle, who is an alcoholic, is a doppelgänger of Asle the narrator, who can imagine the other Asle’s thoughts and fully enter his life narratively. “Is all of this just me seeing things?” Indeed, other characters that appear in the book also can be seen as a representation of some aspect of the narrator, a technique previously seen in Kazuo Ishiguro’s novel The Unconsoled.

The plot is as light as can be, starting with Asle going and rescuing the other Asle as he descends toward alcoholic incapacity and taking him to a clinic to dry out, then looking after his dog. But as Fosse has said, “You don’t read my books for the plots. But it’s not because I want to be a difficult writer. I’ve never tried to write in a complicated way. I always try to write as simply and, I hope, as deeply as I possibly can.”

This is borne out by what Fosse terms his “slow prose” – where elegant variation is eschewed in favour of hypnotic repetition. The Other Name is not difficult to read because the repetition and the endless commas give it the hypnotic feeling of a mantra. A sense of provisionality is provided by the fact that many places and people in the book are named generically: The Clinic, The Art School, The Bald Man, The Nurse.

It all has a distinctly Beckettian flavour, which is no coincidence as Fosse, who was a productive playwright before becoming a novelist, wrote his first play Someone is Going to Come as a response to Waiting for Godot. There is, appropriately, a subdued comedy from time to time, usually when characters talk without communicating.

Although part of a larger work, The Other Names does have a proper (even surprising) ending, and the lack of full stops seems less affection than necessity. It forces you to read the book in long phases, maximising the satisfaction and engagement with Fosse’s slow-flowing story.

The Other Names is published by Fitzcarraldo Editions, a small UK publisher that has distinguished itself by giving us English translations of two recent Nobel Prize winners: Svetlana Alexievich and Olga Tokarczuk. Fosse has long been tipped as a future Nobel winner and he certainly has that European modernist sensibility that the Swedish Academy has rediscovered its appetite for recently. So, get in on the ground floor with this one, and watch this space.