Nigel Farage, the leader of Britain's Brexit Party, has been doused in milkshake by a protestor, the latest anti-EU figure to be targeted during campaigning for the European parliament elections. Video: Reuters 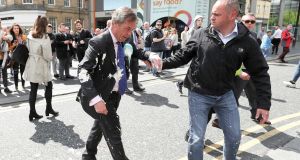 Brexit Party leader Nigel gestures after being hit with a milkshake while arriving for a Brexit Party campaign event in Newcastle. Photograph: Reuters

Nigel Farage has been doused in milkshake during a campaign walkabout in Newcastle.

The Brexit Party leader became the latest victim of a protest which has seen other European election candidates such as Ukip’s Carl Benjamin and ex-English Defence League leader Tommy Robinson suffer similar attacks.

Mr Farage was led away by security as the thrower was dragged away by a police community support officer and was later seen in handcuffs.

Paul Crowther (32) from Throckley, Newcastle, said it was a £5.25 Five Guys banana and salted caramel milkshake. He said: “I didn’t know he was in town, I thought this is my only chance.”

Mr Crowther said he saw there was a Brexit Party event in the city centre, thought it was an MEP and then saw Mr Farage. He explained: “It’s a right of protest against people like him.

“The bile and the racism he spouts out in this country is far more damaging than a bit of milkshake to his front.” Of his milkshake, he ruefully said: “I was quite looking forward to it, but I think it went on a better purpose.”

Mr Farage tweeted: “Sadly some remainers have become radicalised, to the extent that normal campaigning is becoming impossible.

“For a civilised democracy to work you need the losers consent, politicians not accepting the referendum result have led us to this.”

Meanwhile, British prime minister Theresa May is set to begin discussions with senior ministers on her proposed new offer to MPs in a final attempt to get her Brexit deal through parliament.

The weekly meeting of the cabinet on Tuesday is expected to sign off on a package of measures to be included in the forthcoming withdrawal agreement Bill aimed at winning cross-party support.

However, there was widespread scepticism at Westminster that it will fare any better than her three previous failed attempts to get the House of Commons to pass the deal.

Following the collapse last week of cross-party talks with Labour aimed at reaching a common approach, party leader Jeremy Corbyn said he had not yet seen anything new that would persuade him to support it.

It comes at the start of what looks likely to be another torrid week for the prime minister with the Conservatives braced for a hammering at the hands of the Brexit Party in the European elections on Thursday.

One weekend poll put them in a humiliating fifth place behind the Greens, with the results likely to exacerbate frustration in the party at the failure to leave the EU in March as planned.

Labour – which has been criticised for facing both ways on a second referendum – is also expecting a difficult result with the same poll showing them in third place behind the Liberal Democrats.

A government source said the Bill – which is needed to ratify the deal with Brussels – would include new measures on protecting workers’ rights, an issue where agreement with Labour was said to have been close.

However, the source made clear the package would not just be aimed at Labour MPs but would seek to secure the widest possible support across the Commons.

It is expected to include provisions on future trade arrangements with the EU, on environmental protections, and on Northern Ireland, including the use of technology to avoid the need for border controls with the Republic.

Ministers will also consider whether to put any of the alternative approaches to indicative votes in the Commons to establish which, if any, can command a majority.

It will not, however, seek to re-open the withdrawal agreement – which included the controversial Northern Ireland “backstop” – after the EU repeatedly made clear it could not be re-negotiated.

Mrs May has said she will bring the Bill before MPs for its second reading vote in the first week of June.

Regardless of how the vote goes, she will then meet the chairman of the Tory backbench 1922 Committee, Sir Graham Brady, to agree a timetable to elect her successor as party leader, paving the way for her departure from No 10.

The prime minister is expected to set out details of her Bill proposals in a major speech before the end of the month. – PA