Is the prospect of Nigel Farage as future British prime minister any more fanciful than a Trump presidency? 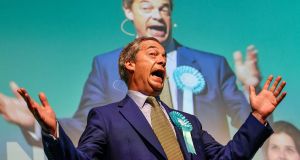 Nigel Farage at a rally with the Brexit Party’s European election candidates at the Corn Exchange in Edinburgh, Scotland, on May 17th. Photograph: Jeff J Mitchell/Getty Images

Sterling has slipped towards the lows of the year as the leadership contest for the Tory party moves into top gear. With a new prime minister likely within a month or two, markets have noticed the passage of time, the growing crisis in British politics and the groundhog nature of the Brexit debate.

Nigel Farage is in the ascendant, and the new party, Change UK, has been pronounced dead on arrival.

The centre has been eviscerated: all of the contestants for prime minister compete only over the hardness of their Brexit views. Nobody knows or cares what the next leader of the UK thinks about anything else.

The people who will pick the next prime minister, an ageing band of a few thousand members of the Conservative Party, will mostly be long gone by the time the full consequences of their votes will be felt.

The foreign exchanges, like the rest of us, have, until recently perhaps, given up trying to figure out what all of this will lead to. The pound has stayed weak, reflecting the conviction that whatever happens will not be good. But more than that is impossible to tell: sterling has been relatively stable since its initial post-referendum collapse.

Its recent weakening is a judgement that the odds of a no-deal exit at the end of October are starting to increase.

Boris Johnson, favourite to replace Theresa May, will be faced with the same no-win scenario. Fans of Star Trek will be familiar with Captain Kirk’s Kobayashi Maru moment, the ultimate test of a leader’s mettle when up against insurmountable odds. Johnson will not have the benefit of science fiction solutions, although he, like so many others, seems to believe in fantasies that even Hollywood scriptwriters couldn’t come up with.

Tired old tropes, Brady amendments, Malthouse compromises, Alternative Arrangements and the like are all zombie ideas, long since buried by the EU but which nevertheless refuse to die. Nobody would pay to watch this B-movie but we are all going to pay for it.

Tánaiste Simon Coveney this week spoke of the need for everyone to compromise. While true in most circumstances, such noble calls ignore the basic Brexit conceit: the various antagonists now define themselves by their unwillingness to compromise.

Brexit authenticity demands extremism: compromise, for the Tories at least, is career suicide. That’s the direct consequence of the views of the gerontocracy that makes up the membership of that party.

Johnson, or whoever is prime minister, will be faced with a House of Commons implacably opposed to no-deal and an EU equally unwilling to open up the withdrawal agreement. But a new withdrawal agreement or hard Brexit will be his one-line election manifesto, his only promise.

On that logic, hard Brexit looks likely. Theresa May hopes that means she can get her deal through before she leaves Downing Street, but that right now looks unlikely.

So another extension looms into view. Yet that is faced with Emmanuel Macron crying “I told you so”, and an EU more willing this time to listen to those who worry that an inverse Turkey solution is now possible. Turkey is in a permanent application to join, but never will; Britain will be forever leaving but never manage it. Best, therefore, if it is done quickly.

Philip Coggan, a journalist with the Economist, recently lamented the fact that he has brought up his children to be considerate, work hard, have principles and not lie. His sorrow was based on the observation that the Tories have proved “you can break all those rules and still get to the top”.

Max Hastings, a prominent historian, has called out all of the leadership hopefuls for their lack of moral courage. Few of them believe a word of what they are saying yet none of them are willing to sacrifice anything for their careers.

As much as all of this raises the chances of a hard exit at the end of October, I suspect a few thoughtful investors are beginning to think about what this all means for the longer term, whatever the short term outcome. In particular, will any kind of Brexit resolve much?

Britain’s political future matters, not least for the economy. Farage has declared an interest in standing at the next general election. I suspect he will run even if Brexit is delivered. He will claim a need to police the purity of Brexit.

His other ambition will be for a seat at the cabinet table, with his party in coalition with the Tories. We scoffed, initially, at the idea of Donald Trump as president of the US. Is the prospect of Farage as prime minister any more fanciful?

Philip Collins, a columnist with the London Times, argues that Brexit is worth doing just to get rid of Farage. That, I think, underestimates Farage’s ambition. It also overestimates British exceptionalism: the UK is not, contrary to Collins’ views, immune from being utterly convulsed, if not consumed, by populism.