Theresa May to present ‘new and improved’ Brexit deal 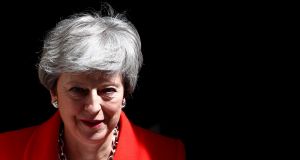 Theresa May has promised that MPs will vote on a “new and improved” version of her Brexit deal when she introduces the withdrawal agreement Bill within the next two weeks.

But Jeremy Corbyn said the government had failed to move sufficiently from its red lines, adding that it was “very, very unlikely” that the legislation would pass all its stages by the end of July.

Writing in the Sunday Times, Mrs May said the government’s talks with Labour had given it a much better idea of what it would take to win parliamentary approval.

“The cabinet will consider the details of those changes next week. It will also consider whether holding votes in parliament to test support for possible solutions would be a useful prelude to MPs considering the legislation. But whatever the outcome of any votes, I will not be simply asking MPs to think again. Instead I will ask them to look at a new and improved deal with fresh pairs of eyes – and to give it their support,” she wrote.

The government has ruled out seeking any changes to the text of the withdrawal agreement itself, and international development secretary Rory Stewart suggested that the changes would involve commitments to maintaining labour and environmental standards. He said the government and Labour were “about half an inch apart” on those issues and on how to maintain a strong trading relationship with the EU and the rest of the world.

“None of us want to remain in the European Union, none of us want a no-deal Brexit, which means logically there has to be a deal,” he told the BBC’s Andrew Marr Show.

“We’re in the territory of a deal, and where we need to focus is parliament and particularly getting Labour votes across – maybe not Jeremy Corbyn’s vote but there are many other moderate, sensible Labour MPs that we should be able to bring across.”

Mr Corbyn told the same programme that Labour would seek to put any deal approved by parliament to a confirmatory referendum but he stopped short of endorsing a second Brexit referendum if MPs failed to back a deal.

“I think if there’s any future public vote it has to be on the basis of some credible option that’s put forward there. At the moment we do not have a credible option because parliament has actually not agreed on anything,” he said.

The Labour leader declined to say if he wished to see the UK leaving the EU or remaining within it. He said free movement of people would end when the UK left the EU but there would be “a great deal of movement of workers” in some sectors.

“It would be part of our negotiations the extent to which workers would transfer from one country to the other and what the needs for it would be,” he said.

“We would ensure that there would be an ability to move from country to country . . . particularly where there’s a need of a workforce to achieve that.”