150 years ago today, a Fenian became the last person to be publicly executed in England

Three days after Irishman Michael Barrett was hanged outside Newgate Prison, the law was changed 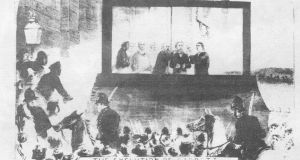 The public execution of Michael Barrett

Today, May 26th, 2018, marks the 150th anniversary of the last public execution in England, when Michael Barrett died in front of Newgate Prison, London. Crowds witnessed hangings, intended as a deterrent, until the Victorians began to question this Hogarthian concept.

Charles Dickens, their most popular novelist, insisted that such spectacles brutalised society. In 1840, he attended the execution of François Courvoisier, a valet who had murdered his master. Dickens recorded that the audience, mostly from the criminal underclass, showed no awe for death, but treated it as a rough sport. He rejected claims that press coverage created this “depraved” excitement. Horror of murder was replaced by a “horrible fascination”, which seized even good and virtuous onlookers, like Thomas Hardy (16), who witnessed the last public hanging of a woman in Dorset in 1856. This inspired his greatest novel, Tess of the d’Urbervilles.

Dickens recalled the Mullingar execution of Bryan Seery for attempted murder of his landlord in 1846. Seery strongly protested his innocence and his memory survives in local folklore. Dickens worried about human error in cases of capital punishment, which would prove especially detrimental in Ireland, where the administration of law could be controversial.

The Fenian movement was motivated by the cataclysm of the Great Famine and ongoing, relentless emigration. It prepared its members for insurrection, hoping to establish an Irish Republic. But the March 1867 Rising failed, handicapped by the detention of suspects under the habeas corpus suspension. In America, the Fenian Brotherhood had split, as did its counterpart at home. Leaders still at large operated from England to evade arrest, although Fenianism was declining.

On September 11th, 1867, Col Thomas Kelly, who had directed the Rising, and Capt Timothy Deasy, both veterans of the American Civil War, were arrested in a police coup, which threatened the survival of their organisation. The Manchester Fenians planned a rescue. On September 18th, armed Irishmen stopped the prison van travelling to Belle Vue Jail. Inefficiency had prevented the local police from acting on a vital warning. An unarmed Sergeant Charles Brett was locked inside the Black Maria and refused to surrender his keys, while the Fenians tried to break it open. The police escort had fled. In the confusion, somebody shot at the lock, tragically killing Brett.

A policeman’s death in an English city, where the Famine Irish clustered together, mistrusted as alien in customs and religion, caused outrage and panic. While Kelly and Deasy were liberated, dozens of Irishmen were rounded up on suspicion. Five were tried and sentenced to death on dubious evidence. One of them received a pardon, for his involvement was most unlikely, while Edward O’Meagher Condon, a American citizen, had his sentence commuted in response to US intervention. On November 23rd, Michael O’Brien, Michael Larkin and William Philip Allen (“the Manchester Martyrs”) were executed in front of the usual crowd. Neither had shot Brett, but contemporary law considered anybody involved in a fatal incident guilty by association. Irish people believed the executions unsafe and unjust. The Martyrs’ speeches from the dock highlighted deep-seated grievances under British rule, which justified the rescue for nationalists. In British eyes they remained murderers, however.

The executions caused a shift in public opinion throughout the Irish diaspora. Constitutional nationalists, who had hitherto avoided Fenianism for having resulted in two failed invasions of Canada and hundreds of arrests, now joined funeral processions honouring Allen, Larkin and O’Brien in Ireland and abroad. Charles Bradlaugh, a leading radical, and other members of the Reform League, which agitated for universal (male) suffrage, highlighted how the British administration had failed to address Ireland’ s suppurating problems. The Fenian movement began to revive.

Col Ricard O’Sullivan Burke supported Col Kelly in reorganising the movement. When arrested and sent to the Clerkenwell House of Detention in London, he used his experience as an engineer in the American Civil War to instruct followers to pack a barrel with gunpowder to “spring” him after destroying the prison wall. O’Sullivan Burke remained unaware that this wall was less formidable than apparent from inside the prison. His small group struggled to raise the necessary funds and an informer alerted the police, which once again failed to respond intelligently. The fuse malfunctioned on December 12th, but the following day the barrel exploded with disastrous effect, killing 12 working-class people and injuring a hundred in a district, which had been sympathetic to the Irish cause.

With hindsight, far too much gunpowder had been used. In the initial panic, nobody recognised this as a jail break with tragic consequences. An Irish-American terror campaign was expected and 65,000 Londoners were sworn in as special constables. Bazalgette, the famous engineer, assisted the police in searching for Fenians intent on reaching parliament or Buckingham Palace via the sewers. The Home Office planned portable electric lights, should the Fenians knock out the gas lamps.

Michael Barrett, a native of Fermanagh working in Glasgow, was eventually arrested on information received and tried at the Old Bailey alongside four minor London-Irish activists, including a woman. Barrett, a Fenian, had assisted Capt James Murphy in planning the jail break, but did not light the fuse. Murphy and the real perpetrator escaped to the US. Barrett was never satisfactorily identified by witnesses and behaved courageously throughout the trial. He was the only one convicted and sentenced to death. Although his execution was twice postponed to test potential alibis, ultimately the home secretary authorised his hanging at the hands of William Calcraft, the notorious executioner, who had also hanged the Manchester Martyrs and Martha Brown, Hardy’s inspiration for Tess of the d’Urbervilles.

On May 29th, 1868, the Capital Punishment Amendment Act 1868 came into force and henceforth Calcraft officiated behind closed doors.
Eva O Cathaoir is the author of Soldiers of Liberty. A study of Fenianism, 1858-1908, which will be published by Lilliput Press this month