Pops by Michael Chabon: a quiet look at fatherhood and writing

The American novelist’s new work doesn’t turn out to be the sort of deep, essayistic engagement that it’s set up to be 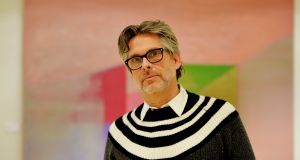 Michael Chabon: the writing in his latest works is too slight to be properly essayistic, but too elegant and thoughtful to be considered fluff. Photograph: Alan Betson / The Irish Times

Pops, the American novelist Michael Chabon’s new collection of essays on parenthood and related matters, begins with an anecdote about attending a literary gathering at the beginning of his writing career. On the cusp of both his first published novel and his first marriage, Chabon fields some sonorous advice from an admired older writer. “Don’t have kids,” drawls the illustrious old geezer of American letters, swigging authoritatively from a longneck. “You can write great books, or you can have kids. It’s up to you.” (Chabon never names the older writer, but my feeling is he might as well have presented the anecdote in the form an acrostic spelling out the words “Richard Ford”.) The brute calculus is laid out in the starkest possible terms: you loose a book, he informs him, for every child.

This kind of thinking is, of course, extremely common among writers – especially male ones – and is as often as not attended by the rueful citation of Cyril Connolly’s line about how there’s no more sombre enemy of good art than the pram in the hallway.

I am, I’ll admit, by no means immune to it myself. Full disclosure: I read much of this brief collection while my week-old daughter dozed, waking now and then to languidly vomit, on my shoulder. Even fuller disclosure: as I write this review, it is 8am on the first Sunday after the passage of its agreed deadline, and her older brother has just woken up, and I am fatally distracted by the thought that any second now he is going to burst into the room I refer to with bitter irony as “my study”, and issue a list of demands: that I make him toast; that I set him up with some cartoons; that I inspect something he’s just constructed with Lego; that I hear him out while he recites a really huge number he’s just thought of. There are, I mean to say, so many figurative prams in the hallway that I can’t even see the desk half the time, let alone sit down at it.

Chabon, for his part, admits to being rattled by the don’t-have-kids injunction; even now – 15 books and four children deep into a combined writing/parenting career – he occasionally finds himself wondering whether “the creative wistfulness that comes over me after a rough night at the keyboard” is in fact “a kind of mourning for the loss of those other, phantom limb novels, the ones that my children stole”. But if it turns out, he decides, that his work doesn’t resound through the centuries because “I allowed my children to steal my time, narrow my compass, and curtail my freedom, I’m all right with that. Once they’re written, my books, unlike my children, hold no wonder for me; no mystery resides in them”.

Despite this opening gambit, Pops doesn’t turn out to be the sort of deep, essayistic engagement with the entanglements of writing and parenthood you feel you’re being set up for. These are the kind of pieces that, when they wind up in a book together, publishers tend to refer to as “loosely connected”– which is to say they are about, or at least feature, Chabon’s children, but are only lightly and secondarily engaged with the lived reality of parenthood. Chabon’s life with the novelist Ayelet Waldman, to whom he’s been married for 25 years – and who once wrote an infamous New York Times article about loving her husband more than their children – is, for instance, hardly mentioned at all.

The writing collected here is, for the most part, too slight to be properly essayistic, but too elegant and thoughtful to be considered fluff. (If it is fluff, it’s cashmere fluff, Merino fluff.) There are pieces on watching baseball with his daughter, on feeling solidarity with his other daughter as a “Northern California freakazoid”, on the racial discomfort of reading Tom Sawyer to his kids. For all the sophisticated swing of Chabon’s prose, there’s a dominant tone of folksiness to the whole thing. In Against Dickitude, for instance, in which he writes about taking his older son to task for being a dick to a girl who fancies him, he sees a flicker of horror cross the boy’s face at the notion that he might have done the girl real emotional damage. “I could see,” he writes, “that I had put a fine crack in him […]But that was okay. Sometimes a crack is just what is needed, to let in a little shaft of light.” At such moments, I felt the urge to sneak out the back of the church for a sneaky fag, in quiet protest against the minister’s self-delighted sermon.

The best piece is Little Man, in which Chabon is sent to Paris by GQ to write about fashion week, and lavishes his writerly attention not on the clothes themselves, or on the cultural milieu surrounding them, but on his 13-year-old son Abe, whose evolving creative relationship with fashion is a subject of equal pride and mystification to his father. What’s most touching is Chabon’s reckoning with the limits of parental jurisdiction, the knowledge that loving your children means accommodating their need, on some level, to reject you.

At the end of the piece, as Abe prepares to return home with his dad, his eyes fill with tears, and Chabon realises why that is. He has found his tribe for the first time, the people who truly get his eccentric investment in fashion; and having found them he now has to leave them. “You are born into a family and those are your people,” writes Chabon, “and they know you and they love you and if you are lucky they even, on occasion, manage to understand you. And that ought to be enough. But it is never enough.” It’s a lovely ending to a funny and moving and engrossing piece of writing, in which the engagement of an author with his subject and the love of a father for his son attain an ideal work-life balance.