Beyond the Breakwater by Catherine Foley: a humble memoir 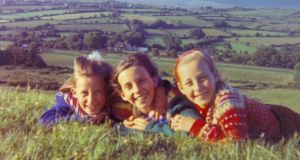 Catherine Foley (centre): her writing reveals an ease with words gained over decades as a journalist

Book Title:
Beyond the Breakwater

Pat McCabe has a lot to answer for. The class messer of Irish literature has altered forever how we read rural Irish memoirs. His evisceration of the central tropes of the genre (hopscotch on the street, the sick mother, singsongs with aunties, treats of lemonade, First Holy Communion, the allure of Kennedy’s Camelot) has made us suspect now of books that reveal overt traces of innocence and earnestness. We wonder when the veneer will be stripped back to reveal a darker truth. And this is the least appropriate way to approach the sincerity and earnestness of Catherine Foley’s new memoir, Beyond the Breakwater: Memories of Home.

Foley, a former staff journalist and social columnist with this newspaper, has written a warm-hearted collection of simple memories in simple language of a simpler time. Their tone is reminiscent of RTÉ’s Sunday Miscellany, which Foley has been a regular contributor to for many years: nostalgic recollections of playing shop; of make-believe tea parties; of staying home sick from school; of a mouse in the house; of watching Daniel Boone’s wild-west adventures on television; of the Pope’s Visit; of first jobs, first crushes and the inevitable, car-chasing family mongrel, who gets knocked down in the end.

And, just like Sunday Miscellany, there are occasional glimpses at something deeper, lucid surprises that resonate and spark reflection in the reader, like her description of the strangeness of the nuns she encountered at school: “the sound of their beads striking their keys made little irregular clicks that sounded like beetles when they moved” and the smell of their clothing “imbued with a rich mix of soap, starch, sweat, camphor balls, polish, incense and old refectory aromas”.

Foley’s writing steps up a notch from the prosaic for these occasional sections of perspicacity, to reveal an ease with words gained over decades as a journalist and, perhaps, from the cellular inheritance of her uncle, the writer, Dónal Foley.

While the book can seem like a sequence of writing exercises, meandering from a childhood in Waterford city and the Ring Gaeltacht to young adulthood and her years working in Dublin, there is a reassurance and compassion to her insight that is nourishing. Foley demonstrates the same qualities that she attributes to her mother’s amateur art pottering: “there is a certain timeless energy, a stillness, and an innocence in every picture”.

She brings moments alive that are familiar and yet seem oddly exotic, such as her maternal grandfather, a retired merchant seaman and Suir river pilot, in braces, starched collars, and black trousers “voluminously wide like a mariner’s should be” and fingers nicotine-stained from Player’s Navy Cut, “splicing and knotting ropes and sculpting small bits of wood”. She conveys the gulf between them by describing his era as “a time when semaphore was still in use, when the chapel bell marking the time had a central place in daily lives.”

Occasional chapters veer into poetry or a travel account or a history lesson about an element of Waterford heritage, such as the cod fishing industry of the 18th and 19th century. And there are a few pure Pat-McCabian moments, like when she describes the infatuation she felt for a statue of the Virgin Mary as a child, recalling her longing to be able to lie down beside the large plaster figure and cuddle her: “To me she was like a giant-sized doll… I’d wrap my arms around her and… kiss her fervently on the cheeks”.

Although the book purports to be an account of two worlds, the English-speaking realm of Waterford city where she spent her early years and the Gaeltacht of Ring where she grew up and still lives, there is surprisingly little insight about the Irish language in these pages, the focus is primarily on personal reminiscence.

And, as you’d expect from a writer of such sincerity, some of the most affecting passages are those dealing with her parents’ decline in old age. A nostalgic account of a summer fishing lobsters with her father contrasts poignantly with a later memory of him frail and weak at the screening of the first TG4 documentary that she produced with her sister, RoseAnn. Likewise, the memories of helping to wash and dress her parents and care for them in their final years are captured with heart-warming compassion.

Beyond the Breakwater is an unusually intimate and humble book – an unpretentious account of what may, perhaps, have been a simpler life in the 1960s and 1970s.