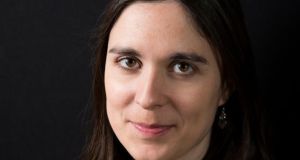 Claire Hennessy: we still believe that it is kinder to force women to continue pregnancies than it is to have a world in which every child is wanted

This time last year I was anxious about May 25th. The more things change . . .

The date in question in 2017 was far more personal and trivial, though. It was the day my new (and 12th) YA novel, Like Other Girls, would be published. The title – which I’d love to say came from some deep, reflective place and not my Disney playlist on Spotify – echoes that phrase that women are so often pseudo-praised with: you’re not like other girls.

Meaning: you’re easier, quieter, more docile. You don’t kick up a fuss. You don’t make demands. You’re not like “the rest of them”.

My protagonist, Lauren, shares a great deal of my background: she attends an all-girls’ secondary school in south Dublin that performs the same musical my school put on in Transition Year. Like Lauren, I eye-rolled my way through much of school and felt that the “other girls” were to be dismissed rather than empathised with.

But she does. Lauren does, in a spoof addition to the school musical that makes me terribly proud of her (do please indulge the writer here, I’m aware she’s fictional) and also was sheer joy to write.

So as the author I imagined I would speak too. And I did, at first. I was invited onto a wonderful panel about queer Irish writing as part of the International Literature Festival Dublin, the same festival that unfortunately is subject to regulations around referendums and has had to cancel an event about Una Mullally’s collection, Repeal the Eighth. I received thoughtful reviews from both print and digital media, this paper included.

But then . . . then there was broadcast media.

Irish media is terribly aware of the need for “balance”, especially about “sensitive issues”, whether or not a referendum is coming up. This awareness (wariness) is not imposed by the broadcasters themselves – it’s a response to precedent set by Catholic organisations such as the Iona Institute, which in 2014 received a payout of €85,000 from RTÉ after being accused by (now Dr) Panti Bliss of homophobia.

I spoke about my novel on a podcast and was reassured that it was all grand because it wasn’t on the radio, so we didn’t need to worry about “balance”. I was allowed speak about the book with the understanding that it was art and not a manifesto, even though art is always political (maintaining or questioning the status quo).

I spoke about my novel on television and was told repeatedly – with those saying this well aware of the ridiculousness of it – not to talk about abortion. “So . . . I won’t turn up in my Repeal jumper then?” I said, amused but at the same time understanding.

We find abortion an ugly topic, one which we can’t talk about unless there’s someone “on the other side” there to say what we’ve been told are all the ‘right things’. The trouble is, that “other side” is populated by people and organisations who should not have the moral high ground. They’re associated with child abuse scandals and mother-and-baby home scandals, with Tuam and Ann Lovett, with the Ryan Report and Savita Halappanavar.

My goal when writing Like Other Girls was to not get preachy. The first version of the section in which Lauren travels to Britain for her abortion was printed out and delivered to two writer friends – both older and infinitely wiser than me – and they underlined and circled bits that were, as they put it, “you having a rant, not your character”. I listened carefully to them, because I knew this was the big risk here: manifesto rather than novel.

But in Ireland we cannot see the difference. Speaking at an event about censorship last year in Britain, the moderator (journalist David Aaronvitch, whose approval I still hold close to my heart) made a wry comment in response to my eye-rolling rendition of “both extremes” – “what, forced abortion for everyone?”

They’re able to say that there, without fear of punishment or lawsuits. We can’t here. It would be insensitive.

We still believe that it is kinder to force women to continue pregnancies than it is to have a world in which every child is wanted.

I hope that on May 26th, my novel about a young woman forced to travel for abortion becomes what it should be: historical fiction, a thing of the past.
Claire Hennessy is the author of several YA novels, most recently Like Other Girls