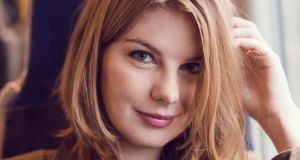 Caroline O’Donoghue: the writing in her debut novel feels authentic and urgent

There is so much to like in Caroline O’Donoghue’s debut novel that it’s best to get the downside out of the way quickly. A shift from the pitch perfect intimacy of the novel’s first half towards an ill-judged thrilleresque storyline of anonymous blog messages and underdeveloped mental health issues, bloats an otherwise charming novel about a millennial woman making her way in the world.

But readers should judge this book by its cover. Promising Young Women is indeed full of promise, a novel penned by a 28-year-old Corkwoman in a style that is sharp, pithy and engaging. The story opens with Jane Peters, an Irish woman working in advertising in London, drowning her sorrows on her 26th birthday over a recent break up with long-term boyfriend Max. She ends up back in their flat, hunched over the toilet bowl as Max holds her hair back. This is no sloppy reunion in the making. Max already has another more promising young woman lined up: a barrister, ready and able to afford her own home; in short, an adult.

O’Donoghue relates Jane’s subsequent spiral with honesty and huge emotional insight. As Jane regales her colleagues with a doctored version of the break-up, she notes: “I liked the way it made me sound: like someone who had bad things happen to them because they were unlucky and not because they deserved them.”

There is a familiarity to Jane’s voice that has its roots in O’Donoghue’s experience as a blogger and social media user. She is now a contributing editor for ThePool.com, writes regularly for the Irish press and co-hosts the podcast School for Dumb Women. The writing in her debut feels authentic and urgent, a documenting of the struggles of a millennial woman, a character who’s aware of her “grumpy, demanding nature and constant low-level dissatisfaction”. The Jane who comes across on the page though is very likeable. As she hurls herself into an affair with her sleazy boss Clem, the reader longs to reach out and pull her back.

Details of the affair are well observed and titillating, in a way that recalls Sally Rooney’s Conversations with Friends. As they celebrate winning a pitch – with Clem giving Jane just the right amount of credit – she finds herself drawn towards him in a fittingly seedy scene in a basement bar: “He has spent so long almost-touching me – nudging me with pencils, or tapping me on the head with wads of paperwork – that feeling his actual skin on mine makes me catch my breath.” The praise lavished on Jane for this pitch makes a later spurning of her ideas and intelligence all the more galling.

The author is excellent on the serious issues that plague young women today, issues that are often misunderstood or dismissed by older generations, particularly men. Jane and her friends experience anxiety disorders, eating disorders, insomnia and mental illness. It is admirable that O’Donoghue tries to document so much but choosing to focus more on Jane’s own disintegration would bring more depth. Stories of Clem’s former girlfriends, and a bizarre subplot involving anonymous blog postings, feel unnecessary. Far more interesting is Jane’s physical and mental collapse where details like her hair loss, her weight loss and even the nasty rash on her thighs – “something I have invented called ‘leg thrush’” – warrant more depiction.

Jane’s plight as a woman on the edge nonetheless comes through. Promising Young Women is timely and vibrant, with O’Donoghue particularly sharp on gender relations. An excruciating scene with an older male doctor, who tells Jane to stop acting like a ladette instead of helping her, leaves her feeling understandably wretched.

The author uses Jane’s work life to draw attention to the guilt and exhaustion that women constantly feel. Her boss, meanwhile, is the kind of man who likes younger, skinny women, “women whose needs can be folded away into cupboards, like ironing boards”. O’Donoghue doesn’t let her own gender off the hook either. From friendships that sour because of promotion, to overemphasis on appearance, “that private, vain way that all women wish they were underweight”.

Although there is a strong zeitgeist feel to the book – “nowadays, STDs are incredibly common, even a little glamorous” – the novel it most recalls is Irish author Rosita Sweetman’s brilliant Fathers Come First, which was published in 1974. Both authors showcase the struggles of attractive young women trying to negotiate power dynamics with older, predatory men who ply them with booze and take advantage of their weaknesses, both mental and physical.

The difference between 1970s Ireland and contemporary London is that for Jane, there are women like mentor Deb to look up to: “We women are taught to make everything we do seem unimportant. And most of us buy into it. [Deb] puts on a squeaky voice. ‘Oh, I just do the press releases,’ or, ‘Oh, I just have the children.’ It’s all bollocks. It really is.”

The Hundred Years’ War on Palestine: ‘no such thing as a Palestinian’
4