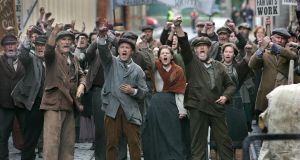 Harland and Wolff shipyard workers in the TV series Titanic - Blood and Steel. It is estimated that in July 1920, 7,000 workers – Catholics and socialists – were expelled from the shipyards

The traditional narrative of the War of Independence identifies the dates of the conflict as encompassing the period from January 21st, 1919, until the truce of July 11th, 1921.

This periodisation does not fit neatly around the chronology of the conflict in the northeast, especially Belfast. Arguably a separate conflict occurred here, contemporaneous with the southern War of Independence.

The northern conflict covered a different time span from mid-1920 to mid-1922, and involved different protagonists on the side of the crown forces, with the Ulster Special Constabulary assuming much of the role of bolstering the Royal Irish Constabulary in the north, as the Black and Tans and Auxiliaries did in the south.

Apart from the south Ulster regions of Monaghan and Newry, where IRA units under the respective commands of Eoin O’Duffy and Frank Aiken were active throughout the period, the IRA in the north, and especially around Belfast was inactive and disorganised for most of 1919 and the early parts of 1920. However the cumulative effect of the worsening conflict in the south eventually made an impact on Belfast in the summer of 1920.

Events in Cork which had strong reverberations in the north were the ostensible reasons for the outbreak of the most intense phases of rioting and killing in July and August.

On July 17th, a contingent of the Cork IRA shot dead the divisional commissioner of police for the Munster region, Lieut Col Gerald Bryce Ferguson Smyth, at the Country Club in Cork City. A month previously Smyth had addressed a group of RIC officers in Listowel, Co Kerry, at which he was reported by one of those present, Constable Jeremiah Mee, to have advocated an unrestrained policy of shooting any republican suspects on sight, promising that this could be done with impunity, regardless of whether the victims included non-combatant civilians.

Smyth’s funeral in Banbridge, Co Down, his family home, on July 21st ignited a series of rioting and attacks on Catholic homes and businesses in predominantly Protestant towns in the district, including Banbridge itself, Dromore and Lisburn.

Pearse Lawlor’s study of these events, The Burnings 1920, situates them in the wider context of the growing fears locally that IRA violence was creeping northward, concern at the increasing economic prosperity of the Catholic middle-class, Sinn Féin’s recent overwhelming success in the June 1920 local government elections, and the heightened tensions surrounding the annual July 12th festivities which coincided with Smyth’s death.

The rhetoric employed by unionist leader Sir Edward Carson at the Twelfth ceremonies in Finaghy, on the outskirts of Belfast, was interpreted as being particularly provocative. Citing the example of the Ulster Volunteer Force in 1913, Carson warned that if once again the British government proved unable to defend loyalists they would “take the matter into our own hands” and “reorganise in our own defence”.

The unionist-supporting Belfast News-Letter blamed the government’s “feebleness in dealing with” the danger posed by Sinn Féin as motivating Carson to deliver “such a militant speech”.

The most extreme violence resulting from the death of Smyth and the ferment surrounding the marching season took place in Belfast in the second half of July 1920.

When the industrial workforce of Belfast returned to their places of employment on Monday, July 21st (the day of Smyth’s funeral in Banbridge) following the summer holiday period that coincided with July 12th, loyalist mobs based in the smaller of the city’s two shipyards, Workman Clark’s “wee yard”, orchestrated a purge of “disloyal” employees, by which they meant Catholics and socialists, from both Workman Clark and the larger Harland and Wolff yard.

Similar intimidation resulting in the expulsion of Catholic employees and trade unionists from both religious background in the Sirocco engineering works, the Mackie and Combe Barber foundries, and various of the city’s linen mills and smaller industrial and commercial enterprises.

Alan Parkinson has estimated that 7,000 workers – Catholics and socialists – were expelled from the shipyards, 20 Catholics were killed and many Catholic businesses destroyed, mainly in the eastern districts of Belfast in the areas surrounding the shipyards.

While Carson’s provocative rhetoric and the death of Smyth might have been the immediate inspiration for the industrial expulsions, they took place against a backdrop of longer-term economic and political tensions, including the increasing political violence in the south, the seemingly inexorable rise of Sinn Féin, and the potential of the Dáil’s “Belfast boycott” to damage northern industrial production.

The targeting of socialists highlights the reverberation of the Russian revolution, and unionist fears of “Bolshevism” making common cause with Irish republicanism.

Furthermore, by 1920 the post-war industrial downturn, which had a particularly detrimental effect on heavy industry such as ship-building, put greater pressure on the availability of industrial employment in Belfast. Ex-servicemen, who had worked in the shipyards before the war, returned to find fewer employment prospects and began to nurture grievances against the perceived expropriation of their former jobs by Catholics.

Just as the first wave of violence, resulting from the killing of Smyth, was beginning to abate, the killing of another policeman, also linked to events as far south as Cork, led to a renewed round of attacks on Belfast’s Catholics, with more fatal consequences than the July conflagration.

On August 22nd, RIC district inspector Oswald Ross Swanzy was shot dead in the centre of Lisburn, Co Antrim, in a joint operation conducted by the Cork and Belfast IRA. They acted under directions from Michael Collins, who believed Swanzy had been in charge of the police party that had shot dead the lord mayor of Cork, Tomás MacCurtain, at him home earlier in March.

Swanzy’s death sparked rioting in Lisburn and Belfast that mirrored the reaction to the killing of Smyth, during which Parkinson estimates that 33 people were killed within the space of 10 days.

One consequence of the violence of mid-1920 was the resurgence of the Belfast IRA, although there appears to have been an inherent tension between the old guard IRA leadership and the so-called “pogrom recruits”. Historians dispute the extent to which the IRA acted as a defender of Catholic communities during these assaults, but are more in agreement that the events of the summer of 1920 motivated the Belfast IRA to greater activity against its “enemies”.

This was due in part, perhaps, to the existence of a new enemy in the shape of the Ulster Special Constabulary. This new force was formed in the latter half of 1920 to deal with the summer’s violence, and was recruited largely from loyalist communities that included a number of ex-servicemen and former Ulster volunteers. The permanent B Specials would develop a particularly notorious reputation for sectarian violence against Catholics that would last till their disbandment in 1970.

The use of the term “pogrom” to describe events in Belfast between 1920 and 1922 remains controversial. It is disputed by Robert Lynch and Alan Parkinson, who see it as defining the systematic murder of larger numbers of a religious minority in a given area, whereas the death toll in Belfast was comparatively smaller and a number of those killed were active in the IRA. Its defenders, including John O’Neill and Kieran Glennon, argue that it describes appropriately what was witnessed and experienced by contemporaries who viewed it as such.

The description of these events as a “pogrom” is associated with Fr John Hassan, a priest attached to St Mary’s in Chapel Lane, Belfast. John O’Neill identifies Hassan as “G.B. McKenna”, author of Belfast Pogrom, 1920-1922: Facts and Figures, compiled at the behest of the provisional government in Dublin. However, by the time Hassan’s book was ready for publication in mid-1922 the southern government felt that it could exacerbate sectarian tensions and so the decision was taken to quash its publication and distribution.

The events of the summer of 1920 set in train a period of intense political violence in the north influenced by political and military upheaval in the south and the ongoing effects of the post-war economic slump.

The estimated death toll in the two years from mid-1920 to mid-1922 is between 450 and 550, with over 1,000 injured, hundreds of homes and business destroyed in arson attacks and thousands of workers left unemployed as a result of sectarian expulsions.

Order was eventually restored by the new northern government’s deployment of a range of draconian measures including the use of the B Specials and the introduction of the Civil Authorities (Special Powers) Act, measures which remained controversial and central to Catholic and nationalist grievances over 50 years later when the next serious period of political violence erupted.