The male gaze filtered through a young woman's eyes 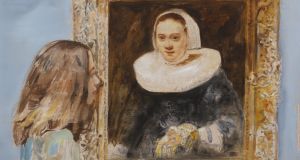 A few years ago, Lauren Elkin’s cultural study The Flâneuse quietly dislodged men from a position of assumed privilege. The flâneur was a type who emerged in the flourishing urban centres of 19th century Europe. Charles Baudelaire noted the advent of the urban stroller whose natural setting was the crowded city streets, an interested though detached observer of the pulse of daily life and events of society, art and politics: a flâneur.

Walter Benjamin later specified the flâneur’s additional interest in the city as a phenomenal showcase for commercial goods, but maintained his status as an observer rather than a mere consumer.      The flâneur, though, was invariably male. City life seemed available exclusively to the male gaze and the male brain as entertainment, distraction and source of reflection and speculation. Elkin, drawing on her own experiences and on such notable precursors as George Sand and Virginia Woolf, flatly disputed that. She wasn’t arguing that women should be allowed to be flâneuses as well, she was pointing out that they had been there all along but were simply ignored.

In 2002, a series of paintings by Margaret Corcoran, An Inquiry, went on view at the Kevin Kavanagh Gallery in Dublin. They too hinged on situating a female observer in a location of male privilege. On the face of it there was nothing radical in the group of representational paintings, but the show quickly became one of the most widely discussed – and well known – in Irish art in the early years of the new century.     An Inquiry took its title from Edmund Burke’s 1757 publication A Philosophical Enquiry into the Origin of Our Ideas of the Sublime and Beautiful, which became a foundational text for the Romantic movement. The sublime is defined as terrifying, lying beyond our comprehension, while the beautiful is orderly, regulated, familiar and predictable. The sublime is also tinged with wonder, eclipsing reason with a “sort of delightful horror.”

Discussing a new OUP edition of Burke’s Enquiry a few years ago, Denis Donoghue noted that, on its original publication, Burke was immediately taken to task by Mary Wollstonecraft for his absurdly patronising view of women, perversely locating the essence of their beauty in their role as delicate, timid creatures, not up to tackling the horror, delightful or not.

In her paintings, Corcoran positioned a young woman, a relaxed and curious flâneuse, in the National Gallery of Ireland, examining, among several works, one that has, despite its residual classical poise, been described as a prototypical Romantic landscape, George Barrett’s View of Powerscourt Waterfall, a picture influenced by Burke’s ideas on the sublime.

Corcoran orientated her flâneuse in line with the Powerscourt torrent so that, visually, her fur-collared white coat continues and amplifies it. She is not just putting herself in the picture, she’s asserting her position in the thick of the sublime. Wollstonecraft would have approved.

Corcoran had previously reworked paintings from the Western tradition in ways that anatomised and questioned their underlying cultural assumptions on beauty, gender and privilege. But An Enquiry marked a development in that, rather than manipulating the imagery – absenting the physical presence of female sitters and leaving  vacant, elaborate costumes, or replacing female heads with substitute signifiers such as birds and flowers – the female presence is predominant, and challenging. Subsequently, one of her key works drew on Eduard Manet’s A Bar at the Folies-Bergère, an absolutely stunning, at first glance straightforward painting with surprisingly complex optics that continue to perplex analysts to an almost comical degree. The male customer is glimpsed in a mirror but the subject is the barmaid, and she is at ease in her domain.

Corcoran’s protagonist, in her take on the subject, At the Spar: Tong, is behind the counter of a local supermarket. If Manet’s barmaid is at one remove in that she inhabits a male-dominated setting, Corcoran’s Tong, who looks perhaps Chinese, is to some unknown extent an outsider, but she too is comfortably in charge of her environment.

The young woman in An Enquiry is Corcoran’s eldest daughter. She makes her way through the Milltown Rooms of the gallery. The rooms were built to accommodate the extraordinarily generous gift of over 200 paintings – together with furniture, books and silver – from the Countess of Milltown. At the beginning of 2002 the gallery’s Millennium Wing, fronting onto Clare St, opened.

Corcoran had not thought to revisit An Enquiry. Then, in 2017, the gallery reopened after the most significant phase of development in its history, which included comprehensive refurbishment, the dramatic improvement of environmental conditions and a comprehensive re-hanging of the collection. It also staged the remarkably ambitious exhibition Vermeer and the Masters of Genre Painting: Inspiration and Rivalry. Towards the end of its run, Corcoran attended the Vermeer show with her younger daughter, Thérèse.

It occupied the renewed Milltown Rooms. As Thérèse lingered in front of a work by Gabriel Metsu, Man Writing a Letter, Corcoran saw a visual connection between her hair and that of the elegant young man in the painting. In an instant she thought of making a series of paintings based on Thérèse moving through the rejuvenated gallery spaces, retracing the path originally taken in An Enquiry. Initially that was her plan. Eventually, though, she decided to allow Thérèse to roam beyond the confines of the Milltown Rooms.

The reason is that she was impressed with how much the feeling of the whole gallery had changed with the refurbishment. It had become uniformly more open, relaxed, inviting: ideal terrain for a flâneuse. She notes that, in any comparison of 2002 and now, she has in many respects a sense of good fortune as a woman, and an artist, to be living and working in a context shaped in no small part by Ireland’s involvement in the EU. At the time of An Enquiry, she points out, we had just taken on the euro. Since then a number of progressive developments have occurred, including recent referenda results.

In An Enquiry II she locates Thérèse in the context of a number of significant paintings as a provocative presence. How does this contemporary young woman relate to works that are repositories of the attitudes and norms of their time? We see her in the company of Joshua Reynolds’ preposterously flamboyant portrait of Charles Coote – or should that be Reynolds’ portrait of the preposterously flamboyant Coote, Earl of Bellamont, resplendent in pink satin with an ostrich plume hat on his head. Certainly, Reynolds saw fit to include a sly dig at the man’s pomposity in the form of a live coot perched on the Earl’s embroidered banner to the left.

More often Corcoran considers paintings that have a bearing on the roles of and attitudes toward women. They include Lavinia Fontana’s large formal record of The Visit of the Queen of Sheba to King Solomon, a work, the artist notes, which is full of iconographic and compositional puzzles. For example, the oddly crowded together ladies in waiting are singularly assertive and have a positively military bearing. Fontana also incorporates a virtuoso portrait of a dog in the right foreground.

Charles Jervas’s fine portrait of Elizabeth, Countess of Bridgewater was originally thought to be a likeness of Lady Mary Wortley Montague, partly on the basis that any reasonable quality portrait of an unnamed woman wearing a Turkish headdress was regarded as potentially of the famous traveller. Elizabeth, a popular young woman, died tragically young. Her hand rests on the keyboard of a rather loosely described clavicythermium, a kind of upright harpsichord, but it is generally assumed to be a prop rather than an indication of musical ability.

Velazquez’s Kitchen Maid, working quietly away while, in another room, the men get on with the Supper at Emmaus, is a natural port of call. These paintings, Corcoran notes, are durable fixtures while we pass through. Their meanings and import change over time. There is another issue that has arisen since 2002: the quality of our experience of museums in the age not just of mass tourism but the smartphone selfie. In depicting a young woman engaged in carefully looking at paintings in relative isolation, Corcoran is stressing something that we cannot afford to take for granted: the endurance of our collective attention span.

Shelbourne statues: Will we ever see them on St Stephen’s Green again?
9