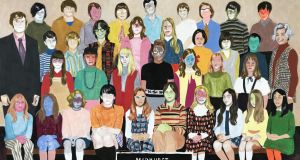 What is it?
Class Picture VII is an oil pastel by Mercedes Helnwein.

How was it done?
Drawing seems to have been Helnwein’s primary visual medium from an early age and when she discovered oil pastels, you could say they provided her with a means to draw paintings. Class Picture VII is based on a typical American school group photograph, but Helnwein’s jarring, un-naturalistic use of colour pastel renders the image eerie and disturbing.

It references the aesthetic of suburban horror films like Halloween and Scream, and hints at the horrors underlying the veneer of cheerful normality in high school. “Especially through the filter of American Culture,” Helnwein writes, “the act of growing up can be a fascinating visual phenomenon . . . it’s fertile ground for storytelling, and everything in my work is based on the potentiality of a story.”

Where can I see it?
Mercedes Helnwein’s exhibition Jerks and Soulmates is showing at the Molesworth Gallery (49 Molesworth St, Dublin until May 30th, molesworthgallery.com)

Is it a typical work by the artist?
It is typical if just slightly unusual in including so many figures. Helnwein has been more, though not uniformly, likely to focus on individuals, couples or just a few figures.

She was born in Vienna. Her father is the Austrian artist Gottfried Helnwein, a painter and “provocateur”. The family moved to Ireland, so Mercedes spent much of her teens in Ireland, though even as a teenager she seems to have been focused on her rich imaginative life, reading widely and absorbing many influences. Those influences presumably helped to shape her distinctively noir, gothic vision (she cites Southern Gothic, Robert Crumb, 19th century Russian literature and the Delta Blues). Her biography lists her main activities at the time as writing and drawing.

She did not attend art school but from early on has been a technically proficient representational artist with impressive skills. Her drawings quickly evoked a particular world. They often recall film stills, and she has worked with film as well, producing two short works in 2013, Nurses and Cops.

The two film shorts share a single, very clever structural idea (and scores by her brother Ali). Her drawings captured moments fraught with tension but did not, and don’t, spell out narrative context. Not that she eschews narrative. She has published a novel, the Potential Hazards of Hester Day (2008) and has written a second.

As well as avoiding conventional art education, she took a novel route to exhibiting her work, staging one-night shows in Los Angeles with a couple of collaborators, notably Alex Prager (she currently splits her time between Los Angeles and Ireland). Not that she rejected conventional gallery shows: this is her fourth at the Molesworth and Damien Hirst was so taken with her most recent show in London that he bought it, lock, stock and barrel. Which is quite a compliment, apart from anything else.

War in the Age of Trump: Four years of fighting in Iraq and Syria
10

What of survivors deemed ‘too young’ to remember the Holocaust?
Real news has value SUBSCRIBE