‘Pressure and stress are viewed in a negative way. But you have to put yourself under pressure’ 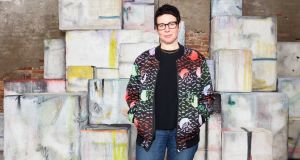 The Shrinking Universe, the exhibition by Ireland’s representative at the Venice Biennale 2019, Eva Rothschild, has just opened in one of the event’s main venues, the vast Arsenale, once the workshop of the Maritime Republic and still an architectural wonder. Rothschild, a Dublin-born sculptor long resident in London, has a strong track record in producing large-scale, ambitious works that are both inviting and disconcerting. She has earned a reputation as someone who delivers.

The work she delivers often intermingles classical sculptural media, such as bronze, with industrial materials such as concrete and polystyrene. Riffling through her back catalogue, one might think that she has an inordinate fondness for a plaster-like material called Jesmonite, a blend of gypsum and acrylic resin. But it is not so much that she is fond of it. Rather, its appeal is its neutrality. And, as she says: “It’s really useful.” It is a fantastically versatile substance, widely used in all sorts of contexts, from fine art to construction and design.

Similarly, in terms of form, Rothschild combines motifs that appear reassuringly related to geometric and minimal abstraction with wild card interruptions that conjure up a world of roadblocks and oil spills and sheer unpredictability. Line has been more important for her than for many contemporary material sculptors. Line, as in both taut geometrical spans of metal and sprawling organic loops of leather or other flexible materials. Strongly associated with her use of black, whether in slick, glossy surfaces or dense, light-gobbling voids, she also employs bursts of intense primary and secondary colour, often in jarring, complementary arrangements.

For any artist, Venice is an opportunity and a challenge. A significant part of the challenge, for artists who work in sculptural installation, are the twin logistical conundrums posed by dealing with a complicated bureaucratic structure – the very phrase “Italian bureaucracy” conjures up a foot on the brake pedal – and a city that is, in defiance of all sensible planning regulations, built on the water. Rothschild’s curator, Mary Cremin, seems temperamentally suited to the challenges. She has earned a reputation for being patient, calm and carefully detailed in her approach.

I find if I don’t have a daily interaction with making, I’m just not comfortable

As director of Void in Derry-Londonderry, incidentally, she also commissioned a work, The Long Note, on women’s role in the civil rights movement in Derry that has earned the artist Helen Cammock a nomination for this year’s Turner Prize. Rothschild is quick to credit her as being a generative, invaluable presence throughout the whole project. Also, Rothschild points out: “Pressure and stress are usually viewed in a negative way. But I find you have to put yourself under pressure. Put it this way, presented with a challenge, for me I’ve found that taking it on is always less stressful than not doing it.”

Given her productivity, it’s no surprise to find she could be described as a compulsive worker. “I find if I don’t have a daily interaction with making, I’m just not comfortable.”

The Shrinking Universe comprises four distinct pieces, but each of those pieces has multiple elements, effectively making up one big environmental installation. Overall it has something of the vibe of an adventure playground cum skateboard park, but with an edge, a certain threatening note sounded by objects and elements that may not have our best interests at heart. You first meet Drift, a wall of massive blocks of concrete, a barrier embellished with painted geometric patterning. It channels your entry into the space. A jumble of cast cylindrical forms is heaped against one side of the wall. Discarded casings or other waste? Although they look functional, their function is unexplained, though one suspects it’s not good.

Meanwhile, in Amphi, more blocks, some massive, this time of cast polystyrene, are stacked untidily against the wall opposite. Their surfaces are scarred and spray-painted. They could be bits of a dismantled barricade. You can climb onto the sculpture, which offers a viewpoint onto Princess and Spektor. The first is a vaunting triangular network that soars up from a bed of crash mats amid a group of truncated columns. The second is a ghostly, precarious-looking stack of six headlike forms mounted on two roughcast blocks.

Overall, The Shrinking Universe, though playful on one level, has a simmering unease about it, an abrasive quality. It fits all too easily into a global context of hard borders, civil unrest, political polarisation and environmental crises. It is, in other words, entirely characteristic of the artist. Rothschild, you could say, likes to set sculptural forms loose in a gallery space. Her work rarely defers to its surroundings in the sense of sitting peacefully in the frame, occupying its appointed slot and acknowledging our privileged position as viewers. In 2009, for example, her installation Cold Corners, a dizzying sequence of triangular linear patterns in black-coated aluminium a la Princess, zigzagged through the vast spaces of the Duveen Galleries in Tate Britain like Spiderman. In her landmark exhibition Hot Touch (the inaugural show at the Hepworth Wakefield in 2011), she intriguingly included a series of photographs of people handling snakes. The encounters were, of course, carefully managed but, while the individuals were not quite panicked, neither were they, understandably, relaxed.

Most famously, or infamously, in 2012, her video work Boys and Sculpture drew responses that ranged from alarm and horror to quiet recognition that one’s darker suspicions were right on the button after all. The video is a straightforward record of what happened when she left a group of boys alone with a display of her sculpture in the Whitechapel Gallery. They were told they were free to interact with the work in whatever way they liked. What they liked may or may not surprise you. Mayhem ensued, a kind of accelerated version of Lord of the Flies with more violence and with sculpture as the sacrificial victim.

One feels that a certain unease or discomfort – though not outright violence – is the kind of response Rothschild would like her sculpture to elicit. As in The Shrinking Universe, it should draw us in, but also make us alert and slightly wary. She was the ideal choice for the Hepworth, which is made up of a superb sequence of spaces (designed by David Chipperfield). Not only is her work evidently linked to the bold, radical modernism of the great Barbara Hepworth (who was born in Wakefield in 1903), Rothschild also took on the new building, testing and pushing its limits in unpredictable ways: with precariously vertiginous columns, a carpet that became a slick, ominous pool, an animated palm tree and pieces that scaled the walls.

As she commented of one of her works, she is drawn to “the magical and the minimal . . . Modernity undermined by the irrational.” She has also referred to the countercultural potential of the 1960s and 1970s, a moment of opportunity that passed, the devastating “purity of intention and its failure to deliver”. Purity of intention gone awry is a good approximation of the mood of her work in general. The composite world that The Shrinking Universe encapsulates is a realm of shrinking horizons, of failed utopian projects and flawed humanity. It is well located in one of the most beautiful cities in the world, a city that is under threat from mass tourism on a scale that beggars belief – cruise ships being a major part of the problem – and, more ominously and fatally perhaps, climate change.